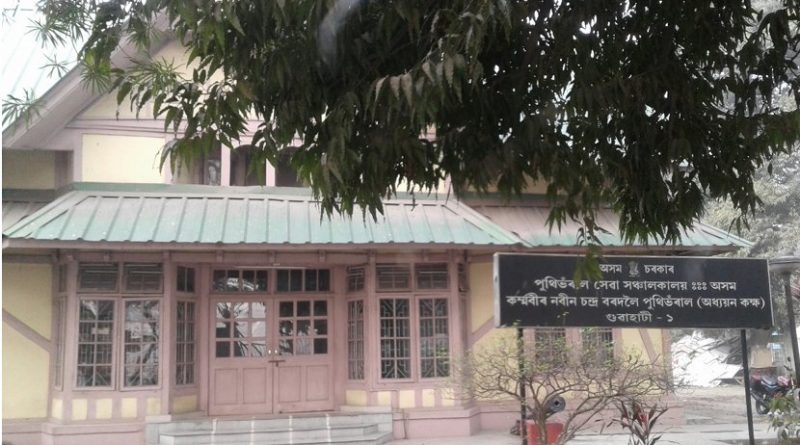 Persistent voices are being raised to revive a historic public library
hall at the heart of Guwahati city and popular demands are floated
for using the space for occasional and selected public gatherings. The
library, surrounded by Cotton University, Handique Girls’ College,
Gauhati High Court, State Museum, Ravindra Bhawan etc, carries the
memory of many great personalities of yesteryear.

Named after a great Assamese patriot, socio-political leader and
writer, the library hall is a century old structure. Erected on
the western bank of pre-historic picturesque tank (Dighalipukhuri) in
1910, the library was initially known as Lord Curzon Hall. Later it
was dedicated to the memory of Karmavir Nabin Chandra Bardoloi in 1953 with the goodwill of the then Assam chief minister Bishnu Ram Medhi.

The then chief commissioner Henry Cotton and commissioner Lt Col
Gordon also supported the initiative and the hall library was
constructed within a year. By 1912, the Curzon Hall was shifted to the
present location and the old building was allowed to house the Cotton
College library, which is still being used by the students of the
prestigious institution.

The Guwahati Municipal Corporation (GMC) took the responsibility to
restore the hall in 1969. But the corporation started using the hall
as one of their branch offices in 1975 and like many government
buildings across the country, the significant structure ended up
facing the carelessness and apathy of the authority. Today the
voluminous campus has virtually turned into a GMC dumping ground.

Lately the GMC as well as Guwahati Metropolitan Development Authority (GMDA), Assam Tourism Development Corporation (ATDC) and Cotton College (now a University) authorities had separately proposed the government to shift the library from its present location and hand over the plot to them, as everyone has plans to develop the space according to their growing needs.

However, various civil society groups including Assam Association of
Architects, State unit of Indian Institute of Architects, Assam
Library Association etc vehemently opposed the move to dismantle the
building. They are unanimous in their views that the building witnessed many historic events in the last century and it was graced by most of the Assamese stalwarts including many national heroes in that period paving the way for raising demands to declare it as a heritage building.

“As a witness of many historic events, the hall now stands as a symbol
of pride and tradition of Guwahati. Most important meetings of the
town used to be held here till the Sixties,” said Dipankar Banerjee, a
prominent history scholar, adding that Nobel laureate Rabindranath
Tagore, Acharya PC Roy, Educationist Ashutosh Mukherjee, Netaji
Subhash Chandra Bose, Loknayak Joyprakash Narayan with many others
delivered lectures at the hall in different occasions.

The first public library of northeast India also housed Assam State
Library in 1953, which was later shifted to the southern bank of Dighalipukhuri in 1960. The hall also played an important role in India’s freedom struggle led by Mahatma Gandhi, where Karmavir Bardoloi appealed to the students of Cotton College to join the movement. His call was accorded with overwhelm responses from the student community.

By then Karmavir (1875–1936) emerged as a prominent Congress leader
from Assam involved in Gandhiji’s non-cooperation movement (1920-1922). He was honoured with a commemorative postage stamp by
the Union government during his birth centenary year.

An arts graduate from Presidency College and law graduate from Ripon
College under Calcutta University, Bardoloi was elected to the Legislative Assembly in 1934 and even put the responsibility as a spokesperson for the opposition. A visionary leader Bardoloi was also instrumental in establishing two important institutions namely Earle Law College and Cotton College in Guwahati.

A recent meeting of All India Patriotic Forum resolved to demand an
immediate revival of the library study hall for common people in general and booklovers in particular. Organized on the occasion of Karmavir’s 82nd death anniversary on 15 February 2018 at Guwahati
Press Club, the meeting also insisted on installing a life size statue of the great patriot in an appropriate location.