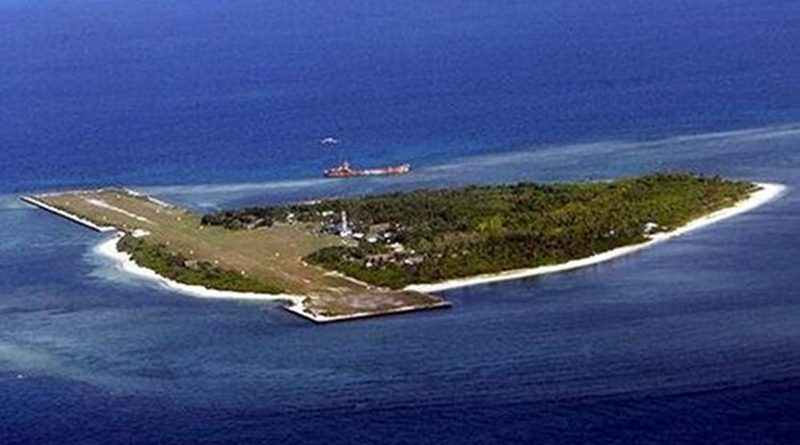 A recent media splash regarding an alleged specific instance of China’s intimidation of the Philippines in the South China Sea has raised considerable controversy. The focus was China’s alleged actions opposing Philippines construction on Thitu (Pag-asa), a high tide feature claimed by both, as well as by Vietnam. Thitu is the largest of the nine features occupied by the Philippines in the Spratlys and hosts about 100 civilians and a small military garrison. China occupies a low tide feature just to the southwest of Thitu known as Subi Reef.

The media circus began on 6 February when the Asia Maritime Transparency Initiative (AMTI) at Washington’s prestigious Center for Strategic and International Studies published and heavily promoted a report that documented Philippines construction on Thitu and alleged that China had attempted to intimidate the Philippines into ceasing that work. This is significant because this analysis re-enforces the narrative that China is ‘militarizing’ the South China Sea disputes and threatening others, as well as the sea lanes.

The AMTI report soon became the target of criticism from both China and the Philippines.  Indeed, it had the rare distinction of being criticized by the country it was trying to alert to nefarious activity against it —the Philippines –-and the country it was warning against—China. Given the controversy and the political implications for China if these allegations are true, they deserve closer examination.

Based on its interpretation of a sequence of satellite photos, the AMTI report said that the number of Chinese vessels near Thitu had gradually increased to a high of 95 on 20 December before decreasing to 42 by January 26. https://amti.csis.org/under-pressure-philippine-construction-paramilitary-response/ The Chinese vessels were mostly fishing boats but did include at least one naval frigate and two coast guard vessels. The AMTI report concluded that these fishing boats were mostly maritime militia because they had no visible fishing equipment on board and had turned off their automatic identification transmitters. The report then postulated that this concentration of vessels was intended to intimidate the Philippines into ceasing construction. It reasoned that “the deployment is consistent with prior examples of China’s ‘cabbage strategy’ which employs concentric layers of fishing, law enforcement, and naval vessels around contested areas” to enforce its claims.

A rebuttal to the AMTI report then appeared in the Global Times, a daily Chinese newspaper that usually provides a Chinese government perspective on international issues. The article accused AMTI of manufacturing a “phantom crisis” and offered alternative explanations for the congregation of Chinese vessels in that area. http://www.globaltimes.cn/content/1139188.shtml

It argued that based on the published satellite images, AMTI came to the wrong conclusion. The Chinese authors –a technical expert and a senior academic–claimed that the Chinese vessels were not “blocking” the Philippines resupply route from Palawan to Pag-asa as implied in the AMTI report nor were they employing a ‘cabbage strategy’. They said that the area in question was a natural fishing ground and that the increased number of fishing vessels there was likely a result of the recent ending of the annual fishing moratorium, and the greater demand for seafood during the then upcoming Chinese New Year celebrations. Moreover they postulated that the law enforcement vessels were there to supervise their operations. Given the source and the outlet, this Global Times piece is not likely to be considered objective –at least outside China.

However, others have also argued that the situation is not a simple picture of China using its fishing fleet to fulfill its strategic objectives.  They say the AMTI fishing militia narrative is hyped and ignores the more complex wider economic and social factors at work domestically in China that influence the behavior of China’s fishing fleet..

For example, some argue that the maritime militia narrative “overestimates Beijing’s centralized control of Chinese fishing activity which is usually under the control of provincial authorities”. http://www.eastasiaforum.org/2018/02/13/bigger-fish-to-fry-than-militias-in-the-south-china-sea/ Zhang Hongzhou of Singapore’s S. Rajaratnam School of International Studies also says the AMTI  “overemphasizes maritime militias [and] reinforces the popular narrative that China is militarizing its fishers…. https://www.maritime-executive.com/article/the-dark-harvest-of-chinese-black-ships

As for the concentration of Chinese fishing vessels in that area, he says that it is logical that they would anchor nearby its occupied Subi Reef regardless of their purpose.  He postulates that some may be reef fishing for sea cucumbers and other valuable reef products such as giant claims and sea turtles. He reasons that because China has made the harvesting of giant clams and sea turtles illegal, such vessels may turn off their identification transponders while so operating. Others may be operating illegally for other reasons.  This could explain part of the AMTI’s report of the  “darkness” of China’s fishing fleet there. Zhang  goes on to suggest that some of the larger Chinese fishing vessels are “support vessels” engaged in the common practice of purchasing catch and selling supplies. He also says  still other vessels may be transiting the area without fishing there just to qualify for special fishing – fuel subsidies for ‘operating’ in the Spratlys. These articles raise questions of accuracy, thoroughness and objectivity of AMTI’s analysis.

Indeed, the Philippines government has become skeptical of the objectivity of AMTI’s analyses. In August 2017, then Philippines Foreign Minister Alan Peter Cayetano scolded those who criticized the presence of Chinese ships near Sandy Cay based on AMTI reports, but did not criticize the presence of US warships in the disputed waters. He said  “You have to realize that their [CSIS/AMTI] reason for being is to pursue the interests of the American people.  We have to pursue Philippine interests”. Regarding AMTI’s most recent report, Philippines Armed Forces Chief Benjamin Madrigal Jr. said that there were no reports of Chinese ships interfering with the Philippine government’s upgrading of the facilities on Pag-asa (the Philippines name for Thitu).

https://www.philstar.com/headlines/2019/02/19/1894986/chinese-newspaper-misquotes-afp-chief-presence-militia-spratlys  This seemed to contradict AMTI’s allegations that China was intimidating the Philippines to stop the construction. https://www.philstar.com/headlines/2019/02/19/1894986/chinese-newspaper-misquotes-afp-chief-presence-militia-spratlys#TBMxVdPoAXJt4F03.99 At the least, this saga indicates that in such situations hyping is not helpful .

However, AMTI doubled down saying that the abrupt drop in the number of Chinese vessels from late December to late January “suggests” Chinese forces have settled into a pattern of monitoring and intimidation after their initial large deployment failed to convince Manila to halt construction”.  https://www.rappler.com/nation/222916-china-deploys-militia-philippines-builds-on-pagasa-island Perhaps so; but the Philippines was indeed apparently undeterred and its construction on the rock continues.

The South China Sea is the nexus of US-China hard and soft power competition for dominance in Southeast Asia. Any incident there is immediately infused with politics that can drive inaccurate or alarmist interpretations.

This is not to say that China has not intimidated other claimants in the South China Sea, or that it will not do so in future. However in this instance, AMTI’s analysis may have extended well beyond the limits of the data. Although it purports to “generate opportunities for cooperation and confidence building…” in this case it exacerbated the situation. https://amti.csis.org/about/ Fortunately in this instance, the tiff at Thitu turned out to be a tempest in a teapot.

Home » Tiff At Thitu A Tempest In A Teapot – Analysis