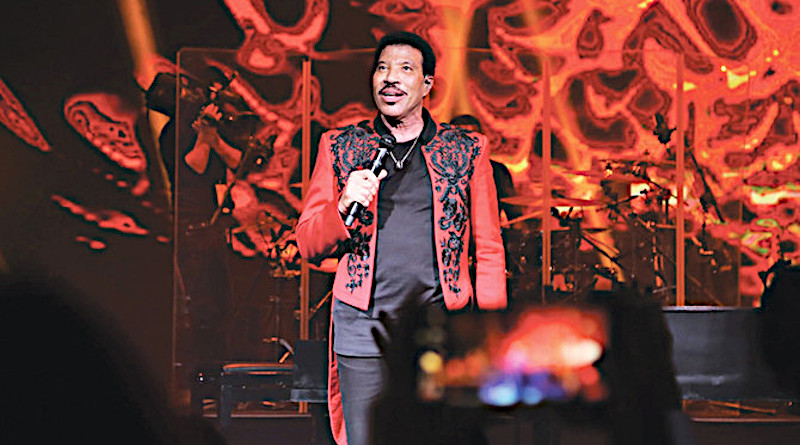 Lionel Richie performed to a sold-out crowd at the Maraya Concert Hall on Friday during AlUla’s second Winter at Tantora festival.

The artist and “American Idol” judge played his greatest solo hits as well as songs from his time with the Commodores as part of his first Saudi performance.

“Let me just say first how beautiful that place is,” Richie told Arab News as he reflected on his experience in AlUla, which is in northwestern Saudi Arabia. “I’ve admired that area for the longest time and the Kingdom is just one of those places where you can have a fabulous concert. And now that the doors are open it is opening up.”

AlUla, a UNESCO world heritage site, is known for its natural beauty and archaeological diversity. It is also becoming famous for hosting major cultural events, including a site-responsive outdoor art installation featuring the work of Saudi and international artists, and the Winter at Tantora Festival, which attracts top-notch singers and musicians.

Richie was especially taken with the mirrored Maraya Concert Hall which, he said, had him fooled with its clever design. “When they kept saying there is the concert hall, I said I see the mountains and they said no, that is the concert hall and for the longest time I thought they were playing a joke on me and then they showed me the side angle from it and I said what a clever piece of architecture. It’s not intrusive to the natural surroundings. Even though they built a fabulous concert hall it is not messing up the environment around it at all.”

It was the perfect setting for a concert, he said, explaining why acoustics were so important to singers and performing artists.

“For example, if I play in a very large arena, the problem with that is if it’s not acoustically put together right, you will get a bouncing back of sound, so it is almost like an echo chamber, which means by the time it reaches the wall and comes back to you, it sounds like you get vibrations. In a perfect acoustics hall, it is as if you’re playing the record. It is just like you’re singing the record because the sound is acoustically perfect, the highs, the lows and the midrange are just absolutely accommodating.”

His fans were delighted with his Friday night performance, getting off their seats and moving to the front of the stage, proof of how popular Richie is in the region.

“As you know, Motown Records was a very small label. We have no offices in Saudi Arabia, the Middle East or Africa. Still this music found its way all the way around the world. I’m being played now in places where Western music is not really accepted,” he added. “When I played in China, I thought Western music had been here forever and that people listened to all types of Western music until someone told me: ‘Western music came with you, Michael Jackson and Madonna. We heard you for the first time.’”

Richie said he was humbled by the love his fans showed him at concerts.

“A lot of my fans come up to me every single day and tell me how much they love my music. I’ve been a part of their families for years and now coming to Saudi Arabia I finally get to be in the place where a lot of those wonderful fans come from. I’m so excited to be here.”

The festival runs until March 7. It was first launched in Dec. 2018 with performances from stars such as Andrea Bocelli and Yanni.