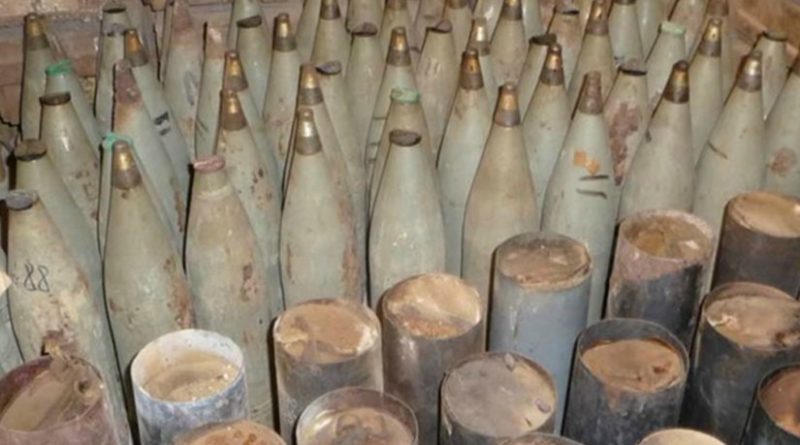 The firm has been linked to a fatal explosion at a shooting range in Bulgaria in 2015 which left a Pentagon contractor working on the Syrian project dead.

Details of the sales, worth in excess of 1 million euros, are revealed in confidential arms export documents obtained by the Balkan Investigative Reporting Network, BIRN.

These show how the aging Chinese and Albanian made arms and ammunition were exported to Bulgaria as part of four export licences signed between the state-owned Military Export Import Company of Albania, MEICO, and Alguns in 2015.

At the same time, Alguns was employed as a subcontractor for the Pentagon’s US Special Operations Command, SOCOM, as part of its attempts to supply and train Syrian rebels fighting Islamic State.

Arms experts believe that Bulgaria is unlikely to have been the final destination for the equipment given its age and the fact that Bulgaria has a relatively modern army which is part of NATO. Alguns has declined to comment on expert analysis that countries in the Middle East or Africa were likely recipients.

Alguns’s role in the Syria programme first emerged in June 2015 when 41-year-old US Navy veteran Francis Norwillo died as a rocket-propelled grenade exploded at a firing range in the village of Anevo, central Bulgaria. The venue is owned by the state-owned arms producer VMZ Sopot.

Emails and contracts obtained by BIRN from a US lawsuit and sources in Bulgaria reveal fresh details about the incident.

Alguns’s involvement in the blast remains hotly contested, but it is not disputed that the company was central in organising sessions at the range in the preceding days.

Norwillo and his injured colleague, Michael Dougherty, had been hired through a $28-million Pentagon contract to train Syrian rebels to fire various Soviet-style weapons. They had travelled to Belarus and then Bulgaria to test the equipment ahead of a training camp in Jordan, according to a lawsuit filed in Florida by Norwillo’s widow and Dougherty.

Court papers against the three US firms allegedly involved in the incident – Purple Shovel, Skybridge Tactical and Regulus Global – detail how the claimants believe the faulty grenade was more than 30 years old, of Bulgarian origin and had been rejected as unsafe by the Pentagon, which was also looking to source ammunition for the Syrian rebels.

Following the tragedy, the Bulgarian authorities identified Alguns as having rented the firing range and providing the faulty rocket.

The firm was fined its 62 500 euros in September 2015 for failing to obtain a permit from the Ministry of the Economy of Bulgaria for the fatal session, but Alguns, which denies the allegations, was later cleared on appeal.

The court ruled the ministry had made significant administrative errors and had failed to prove Alguns had rented the firing range on the day of the accident.

Purple Shovel, the Pentagon’s main contractor on the project, told BIRN in a written statement that Alguns had been brought in by Regulus Global, one of its sub-contractors, to book the sessions and provide the ammunition for the training. It said, however, that the accident took place during a “recreational shoot” at the weekend, after official training had finished.

A timetable of the training obtained by BIRN shows that Alguns had booked the firing range up until Friday, June 5, and also reveals that two Bulgarian state-owned companies, VMZ Sopot and Arcus, were in charge of training the US contractors in a variety of Soviet-style weapons and ammunition.

This included the type of rocket-propelled grenade, OG-7, which malfunctioned, causing the deadly blast.

Skybridge Tactical, which had hired Norwillo and Dougherty for the job, argues in court papers that the explosion occurred during official training, and that the injured parties should be in line for US government compensation as a result.

Regulus Global has dismissed the allegations as lacking in detail.

This incident is not Alguns only brush with the law. The firm was fined 1,000 euros in June 2016 for failing to provide proper documentation related to an ammunition store it maintains in Sliven, southern Bulgaria.

War in the Middle East has sparked an unprecedented flow of arms and ammunition from the Balkans, with Bulgaria playing an important role as a source of weapons and hub for arms brokers.

Asked about the Alguns’ buy-up of Albania’s aging stockpiles, Pieter Wezeman of the Stockholm International Peace Research Institute, a leading source of information on arms transfers, believes it is unlikely Bulgaria was the final destination for the munitions given its age.

He said this equipment would likely have ended up in Syria, Yemen or perhaps Africa.

“There are several possible scenarios,” Wezeman explained. “One is that this goes to Syria or Yemen. Another is that some corrupt officials in Africa buy it as part of a fraudulent scheme. Surplus weapons do quite well in Africa for legitimate exports, although corruption is often suspected.”

SOCOM did not respond directly to questions on whether it had purchased Chinese ammunition from Albania as part of its Syrian programme, saying only that reporters should “speak with Alguns about their activities”.

US firms are banned from buying Chinese ammunition, unless a special dispensation from the State Department is obtained.

Alguns refused to explain what it had done with the equipment once it had arrived in Bulgaria.

Purple Shovel told BIRN in a written statement that it has “never knowingly purchased Chinese equipment or components” and “has never done business with Allguns [sic] directly”.

Tirana has a troubled track record with arms exports from its large stockpiles of Chinese ammunitions, supplied in the 1960s and 70s when Beijing was Albania’s main military backer during communist rule.

In 2007, Florida-based arms broker AEY sold millions of aging, Chinese-made cartridges to the Pentagon for use in Afghanistan.  The bullets had been repackaged in cardboard boxes to look as if they had been produced in Albania in order to sidestep a ban on munitions from China. The firm’s owner, Efraim Diveroli, was given a four year jail sentence for the fraud in 2011.

And in 2011, 800,000 rounds of Chinese ammunition which were due to be delivered from Albania to the United Arab Emirates were illegally diverted to Libyan rebels.

Albania’s Ministry of Defence said that Alguns had provided the correct documents to export the weapons to Bulgaria and that it had verified the firm was “not involved in criminal activity”. It added that any re-export of the ammunition required their consent, although it is widely documented that this clause is often not fulfilled.

Alguns ties to Albania appear to go beyond buying up aging ammunition as it also sought to secure a lease to a communist-era weapons factory in the small Albanian town of Polican. But in a written statement given to BIRN, it said it had dropped the plan.

This investigation was produced by BIRN in cooperation with OCCRP as a part of Paper Trail to Better Governance project.