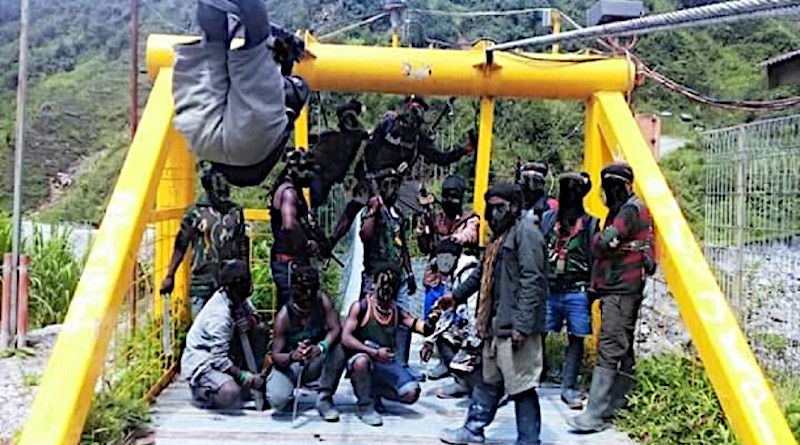 Papuan rebels pose for a photograph in an undisclosed location in Papua in this file image. An armed rebel group has claimed responsibility for an attack on gold and copper mining firm Freeport Indonesia in Papua on March 30, killing a New Zealand national and injuring two Indonesians. (Photo from Facebook of West Papua National Liberation Army)

A New Zealander was shot dead and two other people were injured in an attack claimed by separatist rebels on the offices of a mining company in Indonesia’s Papua province.Graeme Thomas Wall, 57, an employee of Freeport Indonesia, died after being shot in the chest during the attack on March 30 at the company’s giant gold and copper mine near Timika, the capital of Mimika Regency, according to police.

Police and army units were combing the area to try and catch the perpetrators. “We are conducting large-scale sweeps in areas where they could be holed up,” Adhinata  said.

“If employees are still working there, then we will shoot,” he said on the group’s official Facebook page. “Employees must leave the company.”

The attack adds to a long list of violent incidents in the area, where rebel groups demanding self-determination have carried out previous attacks around the mine and on security forces with connections to it.

On March 22, rebels reportedly fired at military-owned aircraft carrying building materials in Pegunungan Bintang district.Father John Djonga, a human rights defender in Papua, condemned the attack and called on rebels and security forces to exercise restraint amid the coronavirus pandemic.

“The world today, including the Papua region, is being attacked by this virus,” he said. “I hope that all parties consider this situation first, regardless of their interests. The safety of others must be a primary consideration.”