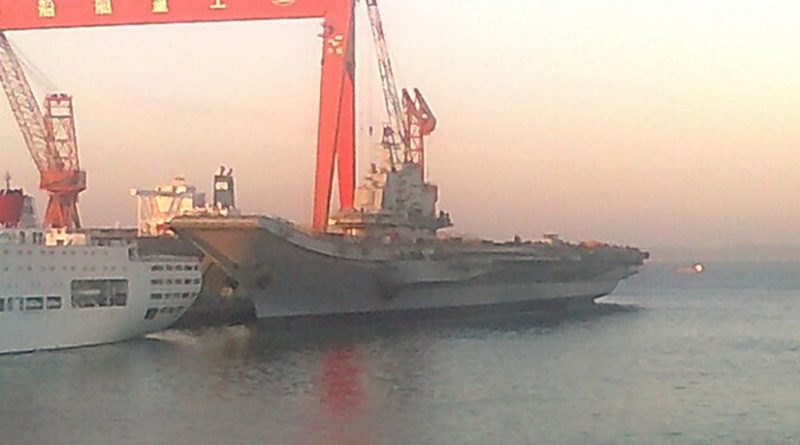 China's aircraft carrier the Liaoning (formerly the Russian ship Riga and subsequently renamed the Varyag before being sold to China) being refit in 2011. Photo Credit: Yhz1221, Wikipedia Commons.

Recently, news.Com.au reported that “forty Chinese warships and three American aircraft carrier battle groups converge[d] in the South China Seas as dangerous tensions between the super powers simmer”. The South China Morning Post ran an article entitled “US aircraft carrier sparks regional fears as it challenges China’s military might in the South China Sea”. These quotes are alarmist and if believed and repeated by the world press and analysts’ reports, could help spur real conflict. That is why it is important to understand that the situation is not as dire as these quotes may indicate. The U.S. and China have apparently reached a tacit agreement to disagree and to maintain a leaky status quo— a ‘new normal’. Not coincidentally, relations on this issue between ASEAN claimants and between ASEAN and China are more or less at the same place.

China’s sole aircraft carrier the Liaoning and some 40 plus warships did indeed undertake China’s largest ever live–fire exercises in the South China Sea. But the Chinese exercise was pre-planned and not a response to any particular US action. Moreover it was not undertaken in less sensitive undisputed waters indicating some restraint. Nevertheless it did send to both domestic and foreign audiences a general signal of its intent and capability to use force if necessary to protect its interests there.

However, these drills by both navies are not mobilizations of force to face off against each other – not yet anyway. As Beijing-based military analyst Zhou Chenming says China realizes that the military gap with the U.S. is still very big _ _.” Nevertheless these shows of force are part of what may well become the ‘new normal’ for the South China Sea.

In this ‘new normal’, the U.S. will continue its freedom of navigation operations (FONOPs) challenging what it views as China’s (and others) ‘illegal’ maritime claims. But it will not publicize them as China views doing so as purposely stirring up its domestic nationalists. It will also continue to argue—some would say disingenuously—that it is defending the freedom of navigation that is threatened by China’s “militarization” of the features it occupies and in doing so is upholding “international law and order”. However it will not try to remove Chinese (or others) forces on the disputed features nor will it ‘blockade’ them. The U.S. will continue to criticize China’s positions and actions and try to convince others of the righteousness of US policy and its actions implementing it. It will also continue to strengthen its military relationships with its allies, ‘strategic partners’ and ‘friends’ in the region and to provide them with training and assets to help it in its self-appointed task. It will also urge ASEAN members to negotiate a binding, robust code of conduct for actions taken in the disputed areas in the South China Sea.

The U.S. has successfully recruited Japan to join its struggle against China. Japan’s new defense policy criticizes China’s “unilateral moves to change the status quo and attempts to establish such changes as accomplished facts” in sea lanes critical to Japan. To counter such moves, Japan plans to enhance the capability of countries situated along these sea lanes to protect them—including in the South China Sea.

China will continue to strenuously object to the US FONOPs. It will also continue to enhance what it claims are its “defensive” capabilities on the features it occupies, and argue—some would say disingenuously– that it is doing so because of the US FONOPs. China will also continue to proclaim that all the features and their “relevant waters” have belonged to China since “time immemorial”– despite the arbitration decision rejecting its historic maritime claim to the area. Politically, it will continue to lobby both ASEAN claimants and other members to support its position that the disputes are matters only between it and each of the other claimants and should be resolved through bilateral negotiations between it and each of them. China will also continue to drag out the negotiations on a code of conduct and push for weak and ambiguous wording therein. But it will not occupy new features and hopefully not threaten or use force against other claimants or their commercial proxies.

Another major irritant in China-U.S. relations in the South China Sea is US intelligence, surveillance and reconnaissance probes offshore China. These probes have in the past resulted in dangerous incidents like those involving an EP-3, the Impeccable, the Cowpens, and Poseiden 8A subhunters. The U.S. will continue to insist that such assets are exercising freedom of navigation while China will continue to insist that they are abusing this right and threatening its security. Although neither has or is likely to change its position on this matter, a modus vivendi seems to have developed as all has been relatively quiet on that front. Perhaps the U.S. is refraining from particular electronic probes that China considers unnecessarily provocative–like ‘tickling’ and observing China’s military response, or interfering with its military communications. Meanwhile China appears to be refraining from direct confrontation of the US probes with its warships or war planes.

The negative effects of this great power struggle on ASEAN unity and centrality have become more visible. As Singaporean Ambassador-at-Large Bilahari Kausikan says ” _ _ the South China Sea has become a “proxy” for the competition between U.S. and China on their ideas of regional order, given that the ASEAN has not covered itself with glory in this issue.”

ASEAN countries are increasingly hedging between the two. The Philippines under President Rodrigo Duterte has used this competition to its advantage, retaining US security protection while benefiting from China’s economic investment trade and largesse. Vietnam has benefitted by welcoming visits by war ships of China’s potential opponents like India and the U.S. as a deterrent to China while continuing to maintain robust economic relations with China.

The situation between China and the U.S. in the South China Sea is far from ideal but it does seem to have settled into a temporary ‘new normal’. Nevertheless it is still quite fragile and could rapidly tilt towards conflict if not well managed. All involved need to recognize this and strive to maintain it.

This piece first appeared in the IPP Review: https://ippreview.com/index.php/Blog/single/id/688.html

One thought on “A ‘New Normal’ In The South China Sea? – OpEd”