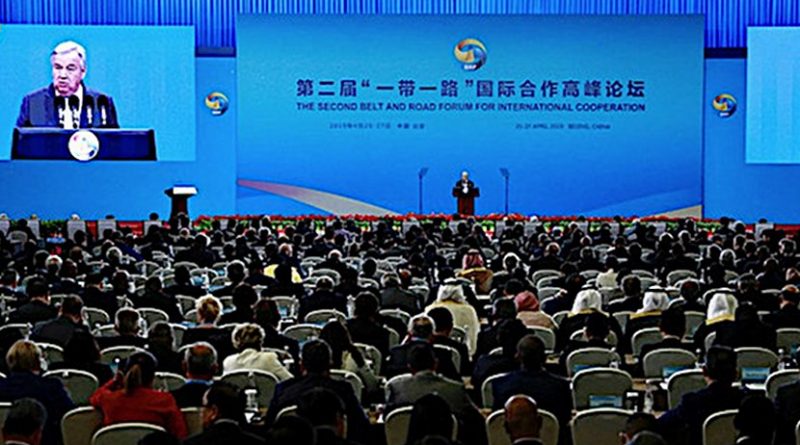 On April 26 and 27, the summit of the Belt and Route Initiative, also known as the New Silk Road, was held in Beijing. With the presence of 125 countries, which are involved to a greater or lesser extent, 37 foreign heads of state and government. More than 20 international organizations also participated as guests. The initiative is the great plan and Chinese geostrategic bet, through investments in various infrastructures, boosting to connect Asia with Europe, Africa and even Latin America and the Caribbean.

In this last region, there are already 19 countries that are part of the initiative to some extent, in the summit were present in different levels of committees: Argentina, Chile, Bolivia, Peru, Ecuador, and Panama just to name a few. The Initiative is an attractive offer for a continent with large deficits in infrastructure and investments.

In some cases, these memoranda are already being translated into concrete projects and infrastructures: In Ecuador, the reconstruction of the international airport “Eloy Alfaro”, in the city of Manta – is being carried out with Chinese capital. A Chinese consortium also builds two bridges in the towns of Canuto and Pimpiguasí, all of them in the province of Manabí, in the west of the country. In Panama, a project is also planned in the framework of the same: a train line that connects the capital of the country with the western city of David, at an estimated initial cost of US $ 5,500.

This summit was held at a time limit of relations between China and the US, for their commercial disputes of which we will surely have news in May. The United States is also in tension with its European partners for trade issues, Germany for example, threatening even with sanctions.

In this context there has been a real exchange of roles, with China taking the flags of free trade, globalization and multilateralism. The contrast between a confrontational US and a China that has bet on a more collaborative geostrategic move is noteworthy.

We already live in a multipolar system. No smart country would be aligned with a single power; rather, the countries try to maintain links with all the great powers, hoping to get the most advantage possible. Even countries that has traditionally identified with the influence zone of the USA, such as Italy in Europe, Chile and Panama in Latin America, have a presence in this Initiative and participated in the summit, perhaps in an application of healthy pragmatism.

This is why the US cannot make all its allies take the same position on China. Washington wants its friends away from Chinese plans, but cannot ignore the appeal of the new silk route initiative. This is why last year, but in a very limited way, the US responded with a similar measure with the creation of the IDFC (United States International Development Finance Corporation) an agency to coordinate investments and international aid, which is expected to be operational this year. The best move for the US is to compete with measures that are equivalent or better than the Chinese ones. But that possibility is not real in the short term. Several years before Trump’s arrival in the White House, the United States was already supporting a non-cooperative strategic culture, characterized by unilateralism and arrogance. As long as this vision is maintained, more countries will seek other ways of relations, like the initiative of the New Silk Road.

While Washington retains the largest military spending in the world by a wide margin and upholds an outdated conception of zero-sum foreign policy, now based on confrontational strategies with extortionary tactics in order to achieve an illusive goal, to continue maintaining unquestionable superiority when the unipolar moment has already gone, in Beijing agreements are signed, based on cooperative dynamics, which pave the routes that could bring peace and promote a multipolar world.

*Juan Martin González Cabañas is a researcher and analyst at Dossier Geopolitico, an Argentina-based think-tank offering a South American perspective on global issues.