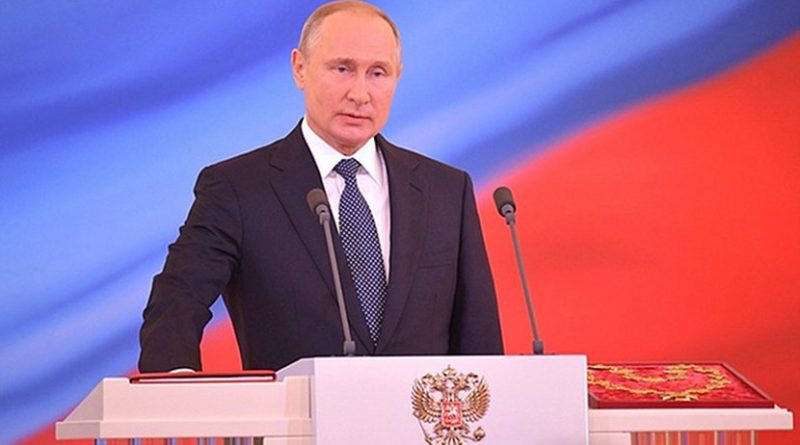 Russia's President Vladimir Putin takes the oath of office on a copy of the Russian Constitution. Photo Credit: Kremlin.ru

The recent summit meeting of the 28 member states of the European Union in Bulgaria reached remarkable results, which were valuable for both Europe and Iran. This was the first time that Europe demonstrated its unanimity and lent its categorical support to a country in the face of the United States by taking a challenging position at international level. The political support of Europe will defuse the United States’ psychological war against Iran and will dispel fears that other countries and global companies may have about cooperation with Iran. Therefore, if this support does not render the US sanctions against Iran totally ineffective, it will at least reduce their impact to a large extent. I wrote elsewhere that this is for the first time in the 40-year history of the Islamic Republic that Iran is so cornered that despite remaining in compliance with its commitments under the nuclear deal, it is under relentless and brutal US onslaught, which is aimed at making the country choose between war or entering into negotiations to accept Washington’s conditions. The administration of former Iranian president, Mahmoud Ahmadinejad, did not accept to engage in negotiations over the country’s nuclear crisis back in 2012 and this is why at that time Iran was threatened with a possible military confrontation. However, for the past three years, Iran has been on the path to end its nuclear crisis through conclusion of a global accord, known as the Joint Comprehensive Plan of Action (JCPOA), and has complied with all its commitments as confirmed by the International Atomic Energy Agency (IAEA). However, the evil triangle of the United States, Israel and Saudi Arabia has been raising excessive demands at a time that the United States has largely violated its commitments in a bid to destabilize the political establishment in Iran. As a result, the United States has been adopting a unilateral and bullying approach, threatening Iran that if it does not resume negotiations and accept the United States’ new conditions, it might risk war. Fortunately and due to good performance of President Hassan Rouhani’s administration in complying with its commitments, the rest of the world – especially the big powers that form the P5+1 group – has been standing up against the United States by announcing that it will not give in to Washington’s bullying. This is a historic opportunity for the world and if Iran gets along with Europe, European countries would be able to turn a new leaf in transatlantic relations, and after 73 years, show off their independent will in the face of the United States. Europe knows well that how humiliating it is for the green continent to accept the application of America’s extra-territorial laws to Europe. It is true that the United States helped Europe in World War II, but it does not mean that Europe must always remain unquestioning executioner of the United States’ commands and allow Washington to make decisions for European countries.

As for the issue of Iran, Europe has made large diplomatic efforts to convince the United States that it must not withdraw from an international agreement without good reason. However, the US President Donald Trump has disrespected his French counterpart as well as German chancellor and British prime minister, and has shown no care for what they say. Within framework of international law and state responsibility, when a government in a country is changed, the new government is obligated to respect international commitments of the previous government and implement them. If new viewpoints emerge, the discontent government must resort to available mechanisms stipulated in an international agreement and convince the other party in a peaceful manner. However, if it fails to do this, it must remain committed to obligations undertaken as per that agreement. When the nuclear accord was reached between the P5+1 group of countries and Iran with the European Union being its implementer and impartial observer, all involved parties underlined correctness and wholesomeness of the accord. However, the new administration in the United States seeks to dismantle this agreement through a bullying approach without taking advantage of dispute settlement mechanisms embedded in the JCPOA and has asked for a new deal based on the viewpoints of the new US administration, which is a totally unlawful and undiplomatic approach.

There are many instances in the world in which one party is not satisfied with an agreement, but since it is not able to convince the other party, it has no choice but to continue to comply with its commitments. The world, especially Europe, has understood that behind this claim by the United States is a plot to undermine and destabilize the political establishment in Iran and this approach cannot be taken as a basis for international relations. Such methods were used in the 19th century in which rogue states decided to topple other governments. However, after establishment of the principles of international relations and international law, an end was put to such behavior by rogue states. Therefore, if European countries, Russia and China comply with the United States, they would be also considered as rogue states, who are not committed to principles of international law. If the United States had chosen an appropriate mechanism to announce its viewpoints about the JCPOA, the world would have shown a different reaction and Tehran, for its turn, would have listened to what Washington had to say under better conditions.