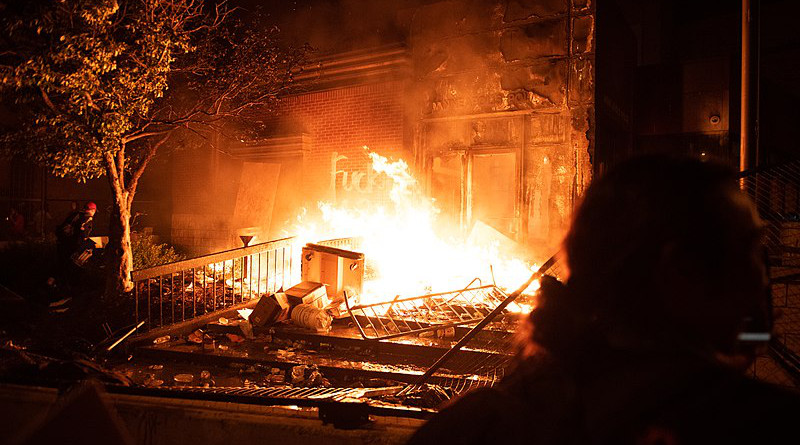 Protesters took to the streets in cities across the United States for a sixth night Sunday to vent their anger over the death of George Floyd and call for change, as police in many areas sought to enforce overnight curfews.

Los Angeles, Chicago, Miami, Detroit and Philadelphia are among the nearly 40 cities that imposed orders banning marchers from the streets after dark. The governors of Texas and Virginia have imposed states of emergency.

Some big city mayors, such as San Francisco’s London Breed, say their curfews are indefinite.

Similar events played out in many cities where largely peaceful protests later turned into scenes of some people setting fires and smashing storefronts. Police holding shields and batons sought to push back lines of protesters, launching tear gas into crowds.

Officers in Washington used tear gas and stun grenades to clear a crowd of more than 1,000 people from Lafayette Park across the street from the White House.  The crowd had marched from Howard University and focused their anger on police, shouting, “No justice, no peace, no racist police.”

The lights that usually illuminate the outside of the White House at night were turned off.

Shortly before midnight, there were multiple fires burning near the White House. Shortly after, the Associated Press reported that the entire Washington, DC National Guard had called in to help with the protest response. District firefighters said one of the blazes extinguished was in the basement of the historic St. John’s Episcopal Church, just blocks from the White House.

National Guard troops also worked with police in Atlanta to enforce an overnight curfew in the southern city. Atlanta Mayor Keisha Lance Bottoms earlier Sunday fired two police officers and put three others on desk duty until accusations of excessive use of force Saturday night could be reviewed.

There was no curfew in New York City, where during the day police kept a distance from protesters but at night there were instances of officers charging into crowds to clear areas and make arrests, as well as protesters throwing objects at police.

The demonstrations began Tuesday in Minneapolis, where George Floyd, a 46-year-old black man, died after being held handcuffed, face down, with a police officer’s knee on the back of his neck for more than eight minutes.

The marchers say they are protesting not just harsh police treatment of black men and women, but also systemic racism in the United States.

The officer who held down Floyd, Derek Chauvin, was charged with third-degree murder and second-degree manslaughter four days later. He, and three other officers who were present and did not intervene, were fired Tuesday. Chauvin is scheduled to appear in court Monday afternoon in Minneapolis. The Minnesota attorney general’s office will take the lead in prosecuting the case.

In Houston, police chief Art Acevedo told CNN he wants his department to escort Floyd’s body home in a show of support to Floyd’s family. Acevedo said Floyd was well-known by many of the city’s officers.

Protesters in Minneapolis and across the country have taken up the familiar chant “No Justice, No Peace.” Others echoed Floyd’s “I can’t breathe.”

President Donald Trump has blamed most of the violence during protests on “Antifa and other radical left-wing groups,” and offered federal military assistance to Minnesota.

Media reports say Trump was taken on Friday night by the Secret Service to a White House underground bunker out of an abundance of caution for a brief period.

“The White House does not comment on security protocols and decisions,” a White House spokesman, Judd Deere, told VOA when asked about the reports.

Joe Biden, the presumptive Democratic presidential nominee, visited the site of one of the protests Sunday and spoke with African Americans in Wilmington, in his home state of Delaware. He asked the protesters not to turn to violence.

“We are a nation in pain right now, but we must not allow this pain to destroy us. As President, I will help lead this conversation,” Biden tweeted.

He also criticized the violence in a separate emailed statement, saying: “Protesting such brutality is right and necessary. But burning down communities and needless destruction is not.”

Attorney General William Barr called for an end to the violence in his own statement Sunday.

“The continued violence and destruction of property endangers the lives and livelihoods of others, and interferes with the rights of peaceful protesters, as well as all other citizens,” he said.

“It also undercuts the urgent work that needs to be done – through constructive engagement between affected communities and law enforcement leaders – to address legitimate grievances. Preventing reconciliation and driving us apart is the goal of these radical groups, and we cannot let them succeed.”

At least 4,400 people have been arrested across the country during the past two days, according to an Associated Press tally.

“They broke the glass, the doors, the windows,” he said via Skype, “and take whatever they can take.” Shafi’i, the owner of a restaurant and clothing store in South Minneapolis, called it “unacceptable” for anyone to destroy personal property and suggested peaceful protests.

Home » US: Protesters Take To Streets For A Sixth Night