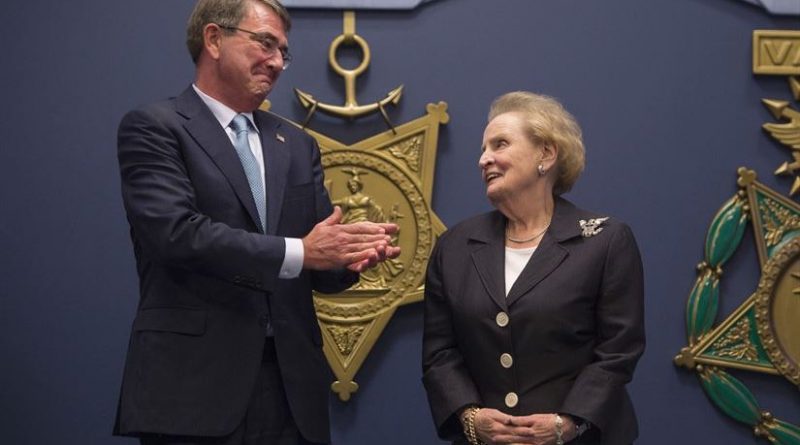 Defense Secretary Ash Carter applauds former Secretary of State Madeleine Albright for her public service achievements before he presents her with the Department of Defense Medal for Distinguished Public Service at the Pentagon June 30, 2016. DoD photo by Senior Master Sgt. Adrian Cadiz

Albright was the first woman secretary of state and served from 1997 to 2001. She was one of the first to recognize the importance of a whole-of-government approach to meeting challenges and championed this principle in Bosnia, Kosovo and the Middle East.

“It might seem odd to some of you that a secretary of defense would give the Department of Defense’s highest award to a secretary of state, but it shouldn’t seem strange to you,” Carter said during the ceremony. “That’s because this award represents an enduring truth: our defense is so vital that we must shepherd it from strategic era to strategic era, from administration to administration, across parties and across our government. Defense requires a strategic perspective – that we understand our connections to the leaders and challenges of the past.”

Albright served in President Jimmy Carter’s National Security Council and as the U.S. Ambassador to the United Nations in the Clinton administration before President Bill Clinton nominated her to be secretary of state.

Carter said that in all her jobs, Albright stressed the need to use American power wisely to protect the country and make a better world.

“She’s always demonstrated a deep understanding of which mix of our nation’s foreign policy tools – whether it’s the nation’s exceptional diplomatic corps, our economic might or the finest fighting force the world has ever known – is best for a given issue,” he said.

It is a complex world that has grown more chaotic, Carter said, citing Russia’s aggression, a growing and changing China, North Korea, Iran and the problem of extremist groups such as the Islamic State of Iraq and the Levant as the major issues of our time.

“While we do not have the luxury of choosing among these challenges, we do have the ability to set a strategic course for the future — a future that’s uncertain, and that will bring with it new and unforeseen challenges, but that will surely demand America’s leadership, values and military strength,” he said.

These are issues that demand the whole-of-government approach that Albright has championed throughout her career, he said.

“As we set that strategic course, meet those challenges and contend with that uncertain future,” he said, “we can learn important lessons from Madeleine’s remarkable career about the need for whole-of-government policy responses, about the strategic benefits of global partners, and about the enduring importance of American values and ideals.”

Ensuring victory in war requires more than just combat power, Carter said – it also requires just governance, meaningful reconciliation, improved education, economic progress and the rule of law. “At State and in her continued work as chair of the National Democratic Institute, Madeleine has helped develop and advance the instruments and institutions needed to make and keep peace,” he added.

Albright demonstrated the effectiveness of this policy in the 1990s when she worked for whole-of-government responses to end crises in Bosnia and Kosovo, to counter nuclear proliferation, to normalize trade with China and to normalize diplomatic relations with Vietnam.

“Madeleine’s work on Bosnia and later in Kosovo also reminds us of the importance of working with – and listening to – our unrivaled network of allies and partners,” Carter said. “That long-time network is an important strategic asset, one nurtured by generations of policymakers like Madeleine.”

Albright thanked the secretary for the award and praised his stewardship of the department. The former secretary sits on the Defense Policy Board, and she explained why the award means so much to her.

“I was not born in the United States,” she said. Albright was born in Czechoslovakia, and her family had to flee the Nazis at the start of World War II, taking refuge in England. Following the war, her family again had to flee from their home country, this time when the Soviets put a communist government in place in Prague in 1948.

Her first memory of Americans was of the GIs who traveled to England to liberate a continent in 1944, she said. She recalled “their boundless energy, their confident wisecracks and jaunty way of walking.”

She said she never lost that admiration and respect for American service members, and this influenced her decisions at senior levels.

“You can’t imagine how humbled I felt when, as secretary, I participated in meetings that resulted in brave men and women being sent into harm’s way,” she said. “It never occurred to me that one of the things I would do when I raised my hand was to send people to war. I vowed never to forget the human lives at stake in these decisions.”

While serving as secretary of state, Albright took every opportunity to visit with troops around the world. “At each stop I would read their names and study their faces,” she said. “These were men and women from across the land representing every variety of background, race, color and creed. I was impressed by their enthusiasm and commitment.”

Albright said the country should mirror service members’ enthusiasm and commitment. “It seems to me that if we are to protect the security and prosperity of our country, we should put an end to partisan squabbling, do a little arithmetic and develop a unified and lasting approach to the federal budget,” she said. “In the process, we should invest first in the education of our young people so they will be able to meet the demands that modern military service and the marketplace require.”

She praised Carter for his Force of the Future initiative, which seeks to do just that, and for his decision, announced earlier in the day, to allow transgender service members to serve openly. “Using the talents of our entire population will be key to building lasting security in the 21st century,” she said.

The United States must not turn its back on the rest of the world, Albright said. “American leadership is still needed in the world today,” she added. “Past lessons inform us that we cannot allow our country to become tired, we cannot turn our backs on responsibilities and we cannot pretend we are not the United States.”