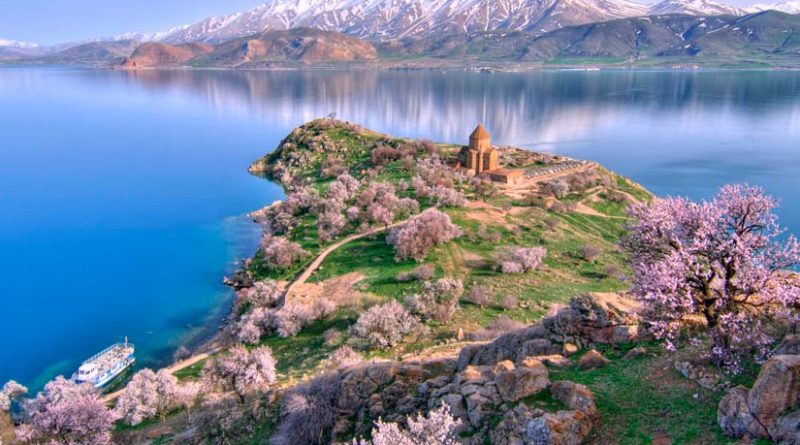 In early June 2015, on behalf of Eurasia Review, I had a lengthy conversation with Hasan Pashali, a renowned journalist of Azerbaijan who is from the Autonomous Republic of Nakhchivan (Azerbaijan). Mr. Hasan Pashali was born in 1981 and studied English Literature and Economics at the Nakhchivan University and Nakhchivan State University. He is currently working as a journalist, translator and a tour guide for high level delegations in Azerbaijan.

The topic of this interview was based upon the cultural values and religious architecture of Azerbaijan, Turkey and the Caspian Sea region. Among the cultural monuments discussed was the Akhdamar Church, a religious object that has been claimed by Armenian scholars to have been built by Armenians.

In relation to this issue, Mr. Pashali noted: “historical facts prove that the Akhdamar monument belongs to Gipchag Turks who adopted Christianity. In the current chain of events there is misleading information in regards to the cultural and historical life in the region. It is clear that there are political intentions standing behind these cultural-historical discrepancies. I would like to elaborate on the two events that took place in the territory of Turkey. One of them is the interference of the Turkish Government’s decision to begin religious ceremonies in the Church of Sumela located in the city of Trabzon which belonged to the Roman Empire. At the same time we want to take a different approach to the origins of Akhdamar Church which is very interesting for the history of Azerbaijan.”

I asked Mr. Pashali whether Armenians were the legitimate founders and builders of this church and he elaborated:

“Armenians claim that Akhdamar Church located in Akhdamar Island in Van lake belongs to Armenians. Indeed Armenians want to ensure that there was an Armenian province in the eastern part of Turkey and that Armenians are the aboriginal tribes in these territories. This Christian temple was constructed even before the Ottoman Empire and Islam religion; however Armenians act as if this temple is Armenia’s ancient historical, cultural and religious monument. This is not true. Armenians’ arrival to this territories dates many-many years after the construction of this church. Based on historical facts we can say that this church is directly connected with cultural-historical, religious-ideological heritage of the Azeri People, and construction of this church and performance of ceremonies here is connected with the heritage of the Gipchaq Turks who lived in Southern Caucasus and Eastern Anatolia. Indeed this church has a greater probability to have been related with the past of Caucasus Albanians.

Famous Azerbaijan writter Yusif Vezir Chemenzeminli once said: ‘word is a home of history; word is a key of history.’

It is interesting that the word Akhdamar has no special meaning in Armenian language. In Arabic this word has no concrete meaning either. According to some claims the word “Akhdamar” means “swell” in Arabic and this does not connect with a clear meaning of church. In fact the word “ak” means “light” in Turkish. In old times, in archaic Turkish language the word “ak” is used as a term to replace nowadays the word “educated man”. Meanwhile the word light comes from Arabic and its meaning in archaic Turkish language is “ak”. As we know “Damar” means road and has also the meaning of a path.

If we translate the word “Akhdamar” into current “Samanyolu” it expresses the meaning of “Milk Way”. This is related with the ancient Turks belief in God.
As you know in 315, during the period of king Vachehan in old Albania, Vachehan officially adopted Christianity. The person close to him (is considered brother or son) named Gregory, considered to be the heir of Jesus and his religious patriot was also from the same Albanians. Because at that time Islam religion was not created and Christianity began to spread and this coincided with the Turks’ belief in God as Christianity was a monotheistic religion. For this reason the Turks adopted the Christian religion. The same Gregory from the Christian faith was killed in Azerbaijan’s current town of Beylegan because of spreading Christian religion. It is assumed that the grave of Charchis prophet in Beylegan belongs to the same Gregory. Meanwhile in ancient times, III- IV centuries B.C., Turks named Karkases who lived around Kars, Van and Sarikamish. It is assumed that city of Kars was established by Karkases. At the same time a district belongs to Karkas in the ancient city of Ani. Therefore in this period Albanians in the Caucasus and Gipchag Turks lived in these territories and they built a church for themselves and this church has no connection with Armenians.

Also we have encountered some facts that Christian Gipchags and Oguz tribes encounter in “Kitabi Dede Gorgud” epic. The character of generalized Christian Turks in the epic is Gipchag Melik. Gipchag Melik robbed khan Gazans house. This is the same period that religious identity prevailed over ethnic identity among Turks. For this reason Christian Gipchags considered themselves as another clan/group. After adoption of Islam religion Christians were oppressed.

Moreover, after the defeat of the Khurramilar movement headed by Babek in the IX century (838), Islam religion is adopted in Azerbaijan. Christian Gipchags who lived in these territories started moving to Eastern Anatolia and created their religious center there and settled around this place.

More precisely according to historical facts this church was build in 915-921.
Central-domed church was in a four-leaf clover-shaped cross plan and built with red stones. On the rural section of stone sculptures (reliefs) religious subjects from the Bible and the Torah together with worldly matters, life in the palace, hunting scenes, human and animal figures depicted. It is also interesting that we can see effects of Middle East Turks during the art period of the Abbasid caliphate (750-1258) in these stone reliefs.

The canvas on the wall of Akhdamar church gives more information. If you look attentively to the face of the fighter his face looks like Gipchaq Turks. The picture of a moon on a horse saddle is a fact that this monument belongs to Turks. And all historians should accept that by turning 180º only Turks could shoot an arrow. We can find traces of Christian Turks in the epic of “Asli and Kerem”.

The priest presented at the epic is not an Armenian Catholic clergy is not at all from Ganca. He was responsible for the activity of Christian Gipchag people who lived under a Bey and was representative of the Ganca Bey for collecting taxes from people. This black priest had the origins of Christian Gipchag Turks and he did not visit Armenians while going to Erzurum and Van. He visited his co-religious community only.

This shows that the Akhdamar church was a religious center of Gipchag Turks. When the Tsar of Russia invaded Azerbaijan territories under the leadership of the Empire ambassador to Iran, Gribodeyov, Armenians migrated from Iran to Azerbaijan. In this stage some part of Armenians settled in Azerbaijan and some parts in Eastern Anatolia. East Anatolia is not Kilikiya. There are information sources that during Byzantium times, Armenians settled in Kilikiya but they are not today’s Armenians. They are ancestors of Armenians considered to have joined the Roman Empire from the Balkans. When Nero defeated Eastern Byzantium and returned to Rome, the same Armenians left these territories.

Armenians have lived in Kilikiya only 30-40 years. After that, they have not been in Kilikiya. In the next period Hay tribes settled in the Ottoman Empire and the Arab world. It is supposed that Akhdamar church belongs to the Azerbaijan culture and Gipchag Turks. Unfortunately this kind of religious ceremonies is not permitted in Turkey. Keeping this church open for religious ceremonies while Armenians visit this church is not in favor of Turkey. All this serves to strengthen Armenian’s territorial claims against Turkey. If we look attentively we will witness a chain of reactions. After opening Samuel church for the Greeks to worship in Trabzon, Akhdamar church opened for Armenian community.”

Mr. Pashali concluded his thoughts on this issue by stating that: “it is better for Azerbaijan and Turkish historians to continue working on the above mentioned details and prove that Akhdamar church has no connection with the Armenian heritage and find documents that ensure that Akhdamar church belongs to Gipchag Turks. Today there are religious-historical documents written in Armenian letters and Gipchag dialects in Echmadzin. Based in these facts, the beginning of such historical research will prove that in general, Christian churches in Anatolia do not belong to Armenian culture. Today cultural monuments and churches in Azerbaijan and monuments in Eastern Anatolia have nothing to do with the Armenians.”

2 thoughts on “Hasan Pashali: New Facts On The Founding Of Akhdamar Church – Interview”