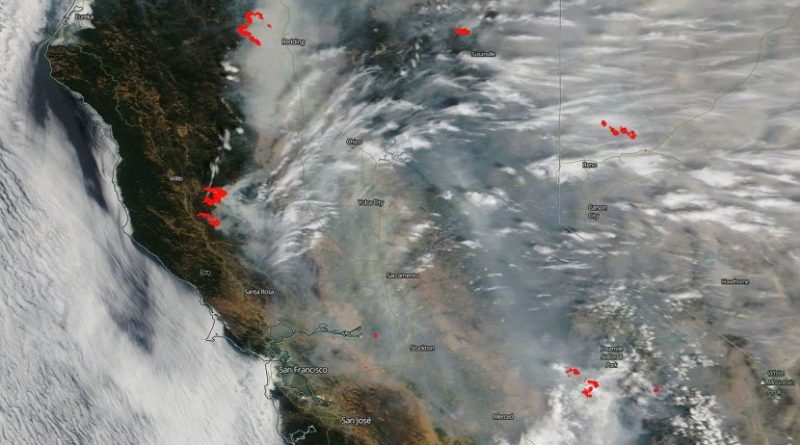 Until today the Carr fire has consumed 12,000 more acres for a total of 110,154 acres and is 27% contained. The number of residences destroyed overnight rose by 161, commercial buildings by 1, and outbuildings by 108. These numbers do not even reflect structures damaged by the fire, only those destroyed.

This fire has proven to be extremely difficult to contain due to both weather conditions and terrain conditions. CAL fire notes that: “Converging East and West winds paired with steep terrain have challenged firefighting efforts.” There are still over 2,500 structures being threatened by this fire and the weather conditions that contributed to the start of the this fire have yet to abate.

The Mendocino Complex of fires are made up of the River and Ranch fires. The River fire grew almost 7,000 acres overnight to 27,069 acres. One more residence and two more outbuildings were destroyed, but 12,200 structures are still being threatened by this fire. As with most of the fires wreaking havoc in California, this one is being helped along by weather conditions as hot, dry, windy conditions continue to persist. The fire burned actively throughout the night and firefighters were challenged by long distance spotting. The Ranch fire (the second part of the Mendocino Complex of fires) grew by more than 12,000 acres to 35,076 acres. Seven residences and 3 outbuildings have been destroyed to date by this fire. As with the River fire, weather conditions in the area are not conducive to firefighting but are to fire spread. There does not seem to be any end in sight for either of these fires.

The Ferguson fire is in its 19th day after having started on July 13. The Ferguson fire is the slowest growing of the fires represented here having only grown 1,187 acres overnight. This fire is listed as 33% contained. The residents of the area have been cautioned that the smoke may increase due to firefighting efforts which will include “Tactical Firing” which Inciweb describes as “an effective way to reduce fuel loads while simultaneously widening or extending containment lines. It can reduce the duration and intensity of wildfires, particularly by decreasing available fuels and weakening the fire as it approaches containment lines.” So basically firefighters set fires and burn the fuels in a controlled manner ahead of the actual fire in an effort to contain fire growth.

All of these fires are causing huge amounts of destruction, but they are also creating health hazards with the amount of smoke that is being pumped into the atmosphere. A study from Georgia Tech found that particle pollution from wildfires, long known for containing soot and other fine particles known to be dangerous to human health, is much worse than previously thought. Naturally burning timber and brush from wildfires release dangerous particles into the air at a rate three times as high as levels known by the EPA, researchers at Georgia Tech found. The study also found wildfires spew methanol, benzene, ozone and other noxious chemicals.