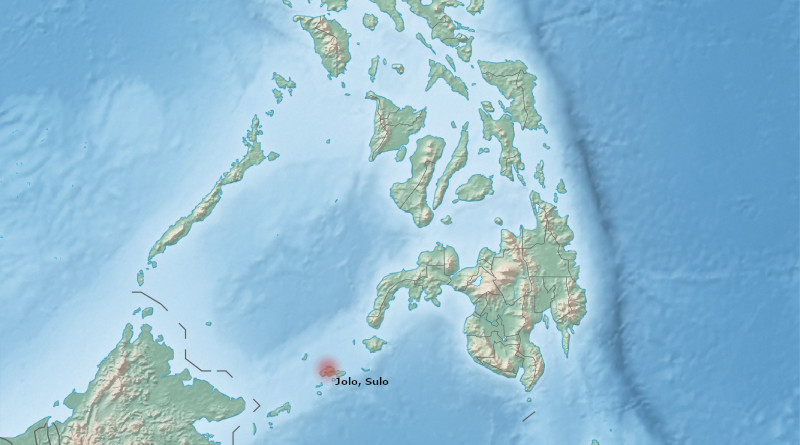 The 24 August 2020 suicide bombing in Jolo which involved female attackers has brought attention to the emergence of the pro-Islamic State (IS) Hatib Hajan Sawadjaan faction of the Abu Sayyaf Group and its tactic of engaging women for this role.

By Kenneth Yeo and Remy Mahzam*

After a nine-month hiatus from the last suicide attack in Mindanao, another incident struck in a plaza near a cathedral in the southern Philippine town of Jolo, a stronghold of the pro-IS Abu Sayyaf Group (ASG). The two-stage attack, which killed at least 14 and wounded 75, is the fifth case of suicide terrorism in the Philippines orchestrated by the IS-aligned Sawadjaan faction of ASG. The first suicide bomber detonated herself near a parked motorcycle while the second blew herself up after a soldier approached her following the first explosion.

One of the suicide bombers is believed to be an Indonesian national who was the wife of 23-year-old Norman Lasuca, the first Filipino suicide bomber who killed himself in 2019. The other bomber is suspected to be the wife of Talha Jumsah alias Abu Talha, a slain bomb expert from ASG. The involvement of females in the suicide attack has amplified fears about the changing tactics of the ASG as the group continues to intensify pressures targeting the military even at crowded civilian spaces.

Against the backdrop of the pandemic, the Philippines could become Southeast Asia’s largest coronavirus hotspot, with close to 112,000 confirmed cases to date, after a lockdown was re-imposed in Manila and four densely populated provinces. The pandemic appears to provide a conducive environment to conduct attacks as local authorities become preoccupied with implementing quarantine measures to contain the spread of the disease.

Among the continuing slew of sporadic and small-scale attacks carried out by militants amidst the outbreak of COVID-19 was one on 17 April. Approximately 40 militants ambushed Filipino soldiers on the island of Jolo, killing 12 and wounding 13. The Defence Intelligence Agency described it as the deadliest attack since the January 2019 suicide bombing of a cathedral that killed 23.

On 26 June, a planned suicide  attack in Metro Manila was foiled after four operatives of the ASG were killed in their safe house in Parañaque City. Another shooting incident three days later involving military and police operatives in Jolo, was related to a mission by the security authorities to target suspected female suicide bombers.

The rise of suicide bombing in the Philippines emanates from the contagious effect of the ideology of violent extremism propagated by IS foreign fighters in the country. While mainstream Islamic theology condemns the act of suicide bombing and considers the indiscriminate act of killing innocent lives as sinful and forbidden, IS and other Islamist terrorist groups describe it as istishhadi (martyrdom).

This is to provide theological legitimacy to their suicide bombing. Over the years, IS propaganda promoting suicide attacks has radicalised the jihadist movement in this region pushing its affiliates to adopt violent tactics to advocate their ideology.

The involvement of women in suicide bombing is not an entirely new phenomenon in Philippines. The recent spate of suicide bombings can be said to have begun on 27 January 2019 when an Indonesian husband and wife, affiliated to the Jamaah Ansharut Daulah (JAD), bombed a church in Jolo Island which killed 23 and wounded 100 others.

Firstly, they have so far been only carried out by members of the Hajan Sawadjaan faction of the ASG, which is aligned with IS. Since the 2019 Jolo Cathedral attack initiated by his faction, Sawadjaan has gain notoriety and was mooted to be the emir of IS in the Philippines. No other group in the Philippines has attempted suicide bombings.

Secondly, suicide bombings only occur in Jolo island despite Sawadjaan’s influence across the Sulu Archipelago. Suicide bombers in Sulu have only conducted attacks on military targets – apart from the Jolo Cathedral attack on January 2019. This might indicate some strategic significance in the deployment of such tactics.

Militant leaders in the region have previously called for greater participation of women in attacks after male fighters begin to decline in numbers and groups face recruitment challenges. The probability of success of attacks involving females are higher as women are less likely to be suspected and detected as terrorists.

Security forces warned of the presence of two females, suspected as would-be suicide bombers, in Jolo island on 19 August. The military claimed that four intelligence officers who were killed in a controversial police operation on 29 June were tracking these suspects. This indicates the possibility of other suicide bombing operations in the near horizon.

The recruitment of female suicide bombers appears to suggest that Sawadjaan’s strategy may be to retain male local militants to defend their territory while expending untrained sympathisers to harass the military.

Apart from Sawadjaan’s group, there are other militant factions in central Mindanao who embrace IS’ wider agenda of establishing a “caliphate” in South-east Asia. If left unchecked, the 2020 Jolo suicide attack is likely to inspire more suicide bombings in this region, especially involving women as IS Sulu attempts to increase its global awareness of the East Asia Wilayah.

The adoption of suicide tactics involving women could also attract the attention of international terrorist groups and networks as foreign fighters set their eye on this region in a bid to boost the operational capabilities of local militants.

*Kenneth Yeo is a Research Analyst and Remy Mahzam an Associate Research Fellow from the International Centre for Political Violence and Terrorism Research (ICPVTR), a unit of the S. Rajaratnam School of International Studies (RSIS), Nanyang Technological University (NTU), Singapore.