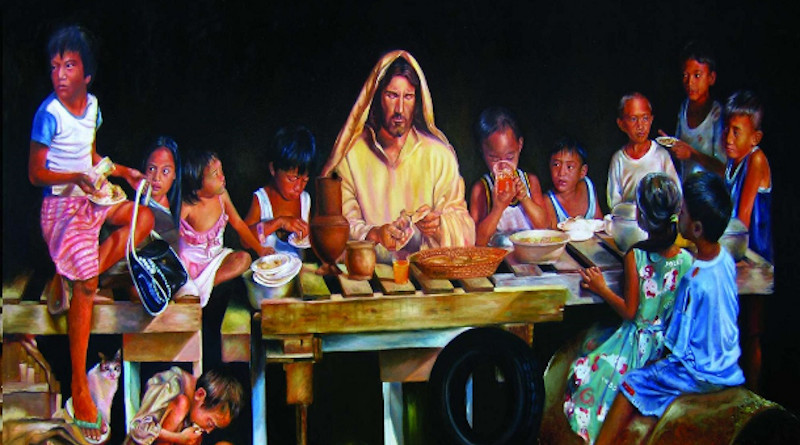 A modern-day depiction of the Last Supper by the late Filipino artist Joey Velasco. (Photo supplied)

I’d never heard about Joey Velasco until I visited his art museum in Marikina City in the Philippines.

After going to an exhibition of Christmas nativity scenes, I noticed there was another museum next door. It was a display of Christian-themed masterpieces by the late artist.

There was a short video presentation to orient visitors as to what to expect when viewing his works.

They were modern-day depictions of the reality in Philippine society. I had the expectation that artwork only depicts the grand and the beautiful. But Velasco’s works are different. They show a country’s struggle in dealing with poverty, mostly caused by structural ills like corruption.

My senses were jolted. My standards of what is beautiful were challenged. Is a work of art beautiful if it reveals a society’s bleak and hideous situation?

One of Velasco’s captivating artworks is his modern painting of Leonardo da Vinci’s “Last Supper” called “Hapag ng Pag-asa” (A Table of Hope). The painting shows Jesus eating not with his apostles but with a group of street children in a nasty and dilapidated setting. They are not even eating at a table but on a huge delivery box used for cargo shipments.

The children with him are strangers to each other. One of them is holding a stolen bag. Another is eating together with a cat. A girl and a boy are sitting on an empty iron container facing Jesus. And one is eating on the ground with perhaps food scraps that he just got from the garbage.

These are Velasco’s imagery of children he saw on the streets of Manila. Every one in the painting was a depiction of a real child Velasco met and helped with his foundation.

“The painting reveals a story of greater hunger than a plate of rice could satisfy. What these children are starved of is love, not merely material food,” Velasco once said.

Every child in the painting has a story. Velasco wrote stories about each of them and how they inspired him in his work.

One was about an 11-year-old boy named Itok who lived in a community of gangs and criminals. Politicians and rich people hired them as goons and Itok was chained up by his mother because he was involved in a gang robbery.

Another child named Emong lived near a dam to catch non-edible fish but cooked them with vinegar and soy sauce to fill their empty bellies. His family’s house was built on cigarette cartons.

Meanwhile, Onse was sold to a prostitute. His stepmother danced as a stripper to put food on the table.

Tinay was a little five-year-old girl who nibbled her thumb and carried her old and dirty doll. She was an orphan after her drug-dependent parents left her with relatives who left her in the streets.

Michael was known to be a “chef of a garbage cuisine.” He scavenged and ate left over food from restaurants in Manila. He reheated or cooked them again to have something to feed his siblings.

Buknoy was a malnourished street beggar strolling along the streets of Manila. He was beaten by his mother and his brother poured boiling water on his forehead, which forced him to leave home.

Dodoy lived under a bridge in a small pigpen about one meter high, just enough for him to survive horizontally.

Joyce was sexually molested when she was 14. She had a baby at 15. The father of her child was arrested for illegal drugs, so she was forced to feed her child alone.

The one eating scraps on the ground was inspired by a Sudanese boy based on a Pulitzer Prize-winning photo in 1994 depicting the effects of famine in Sudan.

These children were Velasco’s subjects in his painting. Velasco said there were two things common to all his subjects — poverty and the love of God.

“All of them are poor. All of them have sad family backgrounds — that is why they ended up abused and in the streets. But they are all loved by Jesus. Jesus was with them despite their poverty,” Velasco said in the video presentation.

“They have a firm trust in God as a compassionate, loving father. They have nothing. They really live a hand-to-mouth existence. But they smile and say: ‘We live on the mercy of God.’

These poor people hold on to the truth that God will never abandon them, even if the walls of the earth crumble down. They begin and end their sentence with ‘If God will have mercy on us.’”

Velasco died from kidney cancer in 2010. He was 43. His work continues to raise awareness among many by showing the sufferings of Christ and Philippine society via the arts.

His widow, Queeny, says that despite battling cancer, Velasco would still paint and finish his artwork, thereby offering his pain for the sanctification of souls.

“He found hope and healing by expressing his faith through his paintings,” she says.

Home » Philippines: A Modern-Day Depiction Of The Last Supper – OpEd