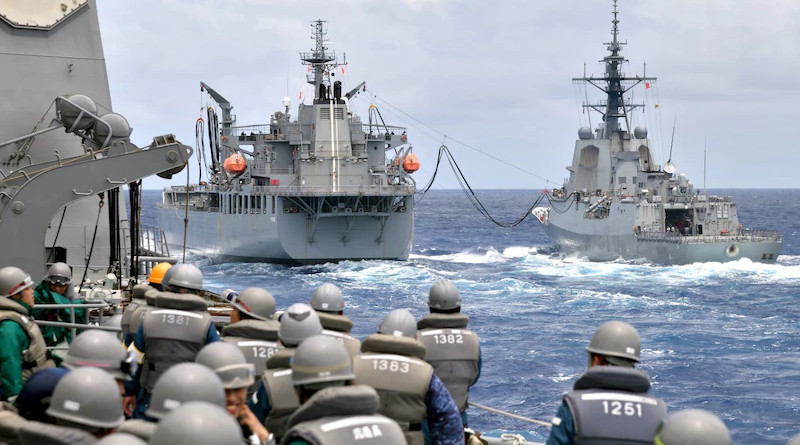 When Defense Secretary Dr. Mark T. Esper talks about the Indo-Pacific he talks about it becoming a “networked region” — not in the information technology sense, but as like-minded countries working together.

His travels to the region this week and previously are to encourage this concept, said David Helvey, performing the duties of assistant secretary of defense for Indo-Pacific affairs.

“This is about countries that have common interests and shared interests that are willing to commit resources to work to support the folks to left and right in pursuit of a common task,” Helvey said during an interview with reporters traveling with Esper.

The North Atlantic Treaty Organization binds together 30 nations in collective defense, but there is no comparable treaty organization in the Indo-Pacific. In the region, the United States has a series of bilateral, treaty-based alliance relationships and a set of partnerships. “When we talk about promoting a networked region, we’re talking about building the relationships we have not only with our allies and partners, we’re promoting the contacts, coordination, integration [among] our allies and partners themselves,” Helvey said. “Sometimes that involves us, sometimes them, working together in support of shared interests.”

The bottom line is a set of like-minded allies and partners who share values to support the principles of a free and open Indo-Pacific. “We are committing resources to work together to support it, uphold it and promote its resilience,” he said.

There are examples of this process. The nations of the region cooperate in enforcement of United Nations Security Council resolutions on North Korea. The United States, Japan, South Korea, the United Kingdom, France, Canada and Australia work together to pool resources and share information. This supports implementation of sanctions against North Korea.

Another example is Indonesia, Malaysia and the Philippines working together in the Sulu Sea to combat piracy, human trafficking and terrorism in that area. Singapore is another nation working with allies through its maritime fusion center or its new counterterrorism information facility.

Exercises also help build the network, such as the Rim of the Pacific exercise that’s going on now. There are other exercises that just include the United States, Japan and Australia and one with only the U.S., Japan and India. “We also have continued defense cooperation [with] the United States, Japan and South Korea,” he said. “So, to the extent that we’re able to not only have bilateral, also multilateral security cooperation is part and parcel of networked security measures.”

Helvy also spoke about realignment in the region. Esper is looking at the force lay-down worldwide and the Indo-Pacific is, obviously, a large part of that effort. The secretary wants to make sure the United States has the right forces in the right places.

“We are heavily concentrated in Northeast Asia,” Helvey said. Some of these troops’ placements are legacies of World WarII. “We’d like to be able to make our presence more geographically distributed, more operationally resilient,” he said. “Maybe the future is going to be less about bases and more about places — being able to operate across a multiplicity of locations, which give us the flexibility and the agility to respond to a variety of different threats and challenges.”

The build-up on Guam is one example of this. “[The Guam base] is going to allow us to be able to project power across and throughout the region and be able to distribute it rapidly,” he said.

The idea is to ensure the United States is resilient in the face of many different types of threats, including China, he said.

China is the concern of many nations in the Indo-Pacific and beyond.

“One of the key things in our strategy is talking about putting the relationship with China on a trajectory of transparency and non-aggression,” Helvey said. “That’s going to require a sustained, open channels of communication with the Chinese — the secretary has talked to his Chinese counterpart a number of times already.”

These communications are tools for risk reduction or crisis management.

The United States and China may have common interests where the two countries could work together. “I think we would have hoped that COVID would have been one of those areas where we can work together, but the Chinese have been unwilling,” he said.

A denuclearized North Korea is an area with a shared interest. “There’s other areas where we may have opportunities to cooperate based on shared interest, but that’s something we have to work in with Chinese to identify,” he said.