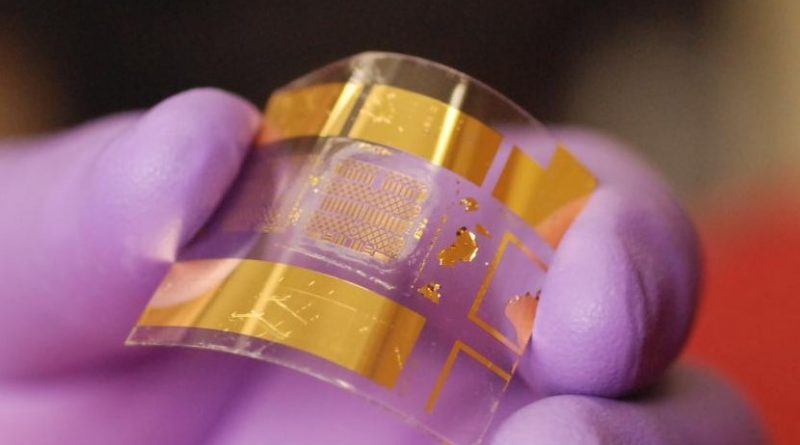 Literal flexibility may bring the power of a new transistor developed at UW-Madison to digital devices that bend and move. Credit: Photo courtesy of Jung-Hun Seo, University at Buffalo, State University of New York

A team of University of Wisconsin-Madison engineers has created the most functional flexible transistor in the world — and with it, a fast, simple and inexpensive fabrication process that’s easily scalable to the commercial level.

It’s an advance that could open the door to an increasingly interconnected world, enabling manufacturers to add “smart,” wireless capabilities to any number of large or small products or objects — like wearable sensors and computers for people and animals — that curve, bend, stretch and move.

Transistors are ubiquitous building blocks of modern electronics. The UW-Madison group’s advance is a twist on a two-decade-old industry standard: a BiCMOS (bipolar complementary metal oxide semiconductor) thin-film transistor, which combines two very different technologies — and speed, high current and low power dissipation in the form of heat and wasted energy — all on one surface.

As a result, these “mixed-signal” devices (with both analog and digital capabilities) deliver both brains and brawn and are the chip of choice for many of today’s portable electronic devices, including cellphones.

“The industry standard is very good,” said Zhenqiang (Jack) Ma, the Lynn H. Matthias Professor and Vilas Distinguished Achievement Professor in electrical and computer engineering at UW-Madison. “Now we can do the same things with our transistor — but it can bend.”

Ma is a world leader in high-frequency flexible electronics. He and his collaborators described their advance in the inaugural issue of the journal Flexible Electronics, published Sept. 27.

Making traditional BiCMOS flexible electronics is difficult, in part because the process takes several months and requires a multitude of delicate, high-temperature steps. Even a minor variation in temperature at any point could ruin all of the previous steps.

Ma and his collaborators fabricated their flexible electronics on a single-crystal silicon nanomembrane on a single bendable piece of plastic. The secret to their success is their unique process, which eliminates many steps and slashes both the time and cost of fabricating the transistors.

“In industry, they need to finish these in three months,” he said. “We finished it in a week.”

He says his group’s much simpler high-temperature process can scale to industry-level production right away.

“The key is that parameters are important,” he said. “One high-temperature step fixes everything — like glue. Now, we have more powerful mixed-signal tools. Basically, the idea is for flexible electronics to expand with this. The platform is getting bigger.”