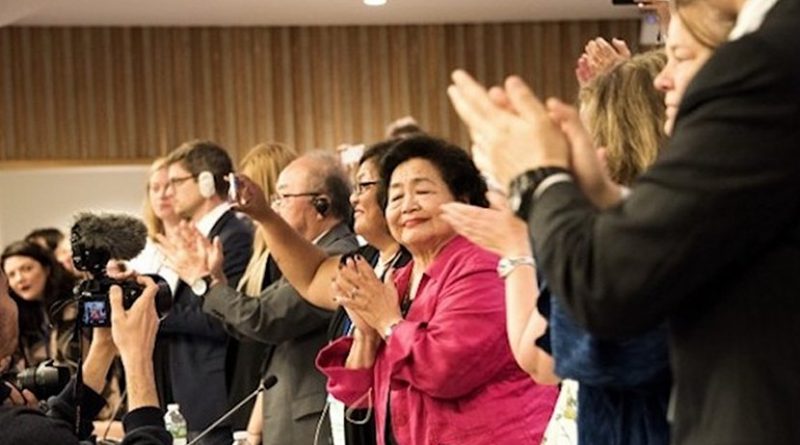 The nuclear pessimists have introduced a new treaty in the “Forum shop” of nuclear disarmament. In March 2017 the treaty was negotiated in United Nations on the Prohibition of Nuclear Weapons and sustained from June 15 to July 7, 2017. The treaty opened for signature on September 20, 2017. The treat proposed in the good faith against the humanitarian consequences of the nuclear weapons use with the purpose of a step towards their total eliminations.

The treaty prohibits States parties from developing, testing, producing, manufacturing, acquiring, possessing, stockpiling, transferring or receiving, using or threatening to use nuclear weapons or other nuclear explosive devices. Lastly, States parties cannot allow the stationing, installation, or deployment of nuclear weapons and other nuclear explosive devices in their territory. In addition to the Treaty’s prohibitions, States parties are obligated to provide victim assistance and help with environmental remediation efforts.

It is not possible to purify the world from the nuclear weapons completely. Up till now various agreements have been carried out including the nuclear Nonproliferation Treaty (NPT), the Comprehensive Nuclear Test Ban Treaty (CTBT), and nuclear-weapon-free-zone agreements, as well as the “right” of states-parties to peaceful uses of nuclear energy. While the assessment shows that there is a deadlock on the complete disarmament.

Moreover, two important elements of the nonproliferation regime have never come into effect, largely because of resistance by the United States and other nuclear weapon states. The Comprehensive Test Ban Treaty  (CTBT) which has been signed by 183 countries but cannot enter into force until all forty-four states with significant military or civilian nuclear capacity ratifies it. China, India, Israel, Pakistan, and the United States have not yet done so.

Efforts to conclude a Fissile Material Cutoff Treaty (FMCT) to ban the production of weapons-grade material have also stalled. The United States has been criticized for blocking progress on both issues. International instruments combating proliferation were successful before the end of the cold war but still the states like Pakistan, India and Israel have acquired the nuclear technology. North Koreas nuclear test and her claim of possessing hydrogen bomb is a serious blow for the non proliferation regime, NPT and disarmament efforts.

North Korea’s nuclearization is encouraging the states like Iran keep on to pursuing her nuclear capabilities. Moreover it will provide space for Iran now continues to advance its nuclear program; even after crosscutting economic sanctions have been imposed on her and near universal global condemnation is still spreading. According to NPT, the nuclear weapon states (NWS) agreed to not support other states in acquiring nuclear technology, but they should make them move toward eventual disarmament, but still a special wavier has been given to India which is a defector nuclear weapon state and non signatory of NPT like Israel, Pakistan and North Korea.

None of the nuclear weapon state including many of the NATO members has signed the nuclear ban treaty. While the proponents of the treaty claim that the treaty was accepted by the overwhelming majority. Three of the P5 states the United States, France, and the United Kingdom issued a joint statement following the vote: “We do not intend to sign, ratify or ever become party to it. Therefore, there will be no change in the legal obligations on our countries with respect to nuclear weapons”. They said the treaty do not address and contribute to international law.

This treaty could have unseen implications for Pakistan particularly with regard to its position on Fissile Material Cut-Off Treaty (FMCT). Pakistan needs to be cautious about it as new trend is being set up. If the UN is negotiating the nuclear ban treaty then FMCT can also be taken to the UN as well. Talks on the FMCT have been on hold from past several years thus putting Pakistan at a continuous disadvantage and compromising iher interests. This treaty will divert the attention of the international community from other Disarmament and non proliferation treaties.

Ideas about eliminating the bomb are as old as the bomb itself. Can nuclear weapons be completely eliminated? Logic might seem to say of course not. Nuclear weapon can be dismantled to some extent but they cannot be uninvented. For instance if a state dismantle some of her weapons, by and far she can make them again whenever she has the will to do so. Those nuclear weapons may not, in fact, make the world more dangerous but the bomb may actually make us safer. In this era of rogue states and transnational terrorists, that idea sounds so obviously wrongheaded that few politicians or policymakers are willing to entertain it. But that’s a mistake. Knowing the truth about nukes would have a profound impact on government policy. Primarily progress can be made toward arms control, such as actions to reduce the risks of nuclear theft, accident, and terrorism. But the complete elimination may not be the solution nor does it guarantee a complete peace.

There is the need to address the previous treaties first like NPT, FMCT and CTBT who are facing challenges and talks are on hold. NWS and NWS States should start the negotiation for solving the issues of nuclear acquisition on table instead of such treaties because a country acquiring the nuclear weapon will not completely eliminate the arms this will have serious implications for the security of a state.