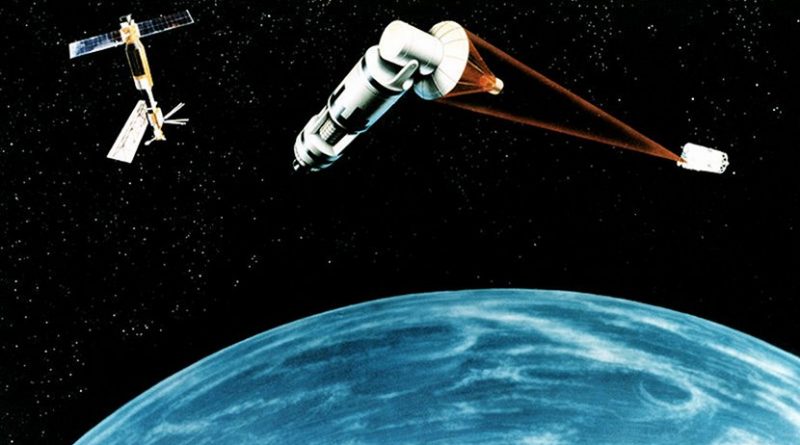 1984 artist's concept of a generic laser-equipped satellite firing on another with the proposed Space Station Freedom(ISS) in the background. Source: U.S. Air Force, Wikipedia Commons.

Outer space has been called the last frontier, but could it become the battleground of the future? Warfare in space seems difficult to imagine outside works of science fiction, but the concept and advantages of weapons in space have been under serious deliberation by global powers in the recent past. Though the international community in years past has made great strides in addressing and eliminating the nuclear threat emanating from outer space, additional threats have yet to be addressed.

As it stands now there exists an international consensus banning the placement of strategic Weapons of Mass Destruction (WMD) in outer space and on celestial bodies. As a result, the idea of a space-based defence strategy, made famous by US President Ronald Reagan in his 1983 televised appeal to Congress, has largely lost traction in the ballistic missile realm due to international restrictions placed on this activity. Thanks the international community’s forward thinking, a widely embraced status quo concerning humankind’s moral role in space and space exploration is more or less accepted and upheld in the Outer Space Treaty. Global initiatives such as the United Nations Committee on the Peaceful Uses of Outer Space (COPUOS) and the Prevention of an Arms Race in Space (PAROS) have also been established to further global efforts in protecting the area that lies beyond Earth’s atmosphere.

One remaining loophole, however, is that conventional weapons are not banned in space by any international treaty, and the US, and consequently, China would like it to remain this way. If international law is not adjusted to specify the exclusion of conventional weapons in outer space, the global community leaves the development of a conventional space race wide open, making the cosmos a possible setting for conflict in the near future.

As space defence modernises to include external and internal threats to orbiting technology in the forms of Directed Energy Weapons (DEWs), Anti-Satellite Weapons (ASATs), and cyber attacks, fear of any adversarial exploitation of such vulnerabilities has led to increased mistrust between the US and China. This has, ironically, left conventional space attacks legally conductible under current international law. Scepticism of Chinese intentions on the part of the US however, is not entirely unfounded.

In 2007, China launched a missile that destroyed one of its own weather satellites in low-earth orbit; an escalatory mission under the guise of Chinese ‘scientific exploration’. The US took this as an aggressive display of China’s space-based defence capabilities and retaliated with its own demonstration in 2008 by destroying a US reconnaissance satellite. Since these incidents, the US and China have been unwilling to tie their hands in anyway, thus rejecting treaties that would not allow them to respond in kind to attacks of this nature – an attitude that both sides claim is a rejection based exclusively on defence-based concerns. The vetoing of propositions that have included language for removing conventional space-based threats, such as the Russian and Chinese-led campaign at the 2008 Conference on Disarmament, has been a disappointing and consistent result thus far.

However, outer space does not just belong to China and the US. As the world continues to progress technologically, pursuits in space have become a wider global enterprise. It is a frontier in which any entity can stake a claim and as of now, the public and private sector amicably share this orbital space with 1,100 active satellites in orbit belonging to over fifty different countries. This arrangement has improved convenience in many people’s lives due to the incredible abilities of the technology utilising this medium. Satellites, both public and privately operated, are becoming increasingly populous.

Satellite innovation has propelled humans forward light years in many ways, but mankind’s increasing dependency on technology renders states extremely vulnerable. This is why the focus of efforts to prevent a space-based conventional catastrophe should largely be concerned with eliminating the legality of Directed Energy Weapons (DEWs) and Anti-Satellite Weapons (ASATs) – attractive technologies due to their low risk and potentially high rewards. In addition to the advantages of DEWs and ASATs, missiles, ‘Rods from God’ (kinetic bombardment), and any other weapon – conventional or not – when launched from space will reach the intended target almost immediately, allowing near real-time retaliation or instigation. This makes space deployment far more effective than earth-based launches.

Space-based weapons like these can be utilised in several ways. Scientists and engineers have developed artillery that Group Captain Pa Patil, author of Weaponisation of Space, An Inevitable Reality and Plausible Fallout, has placed into four categories : Earth-to-space, space-to-Earth, space-to-space, and Earth-to-Earth. Logically, these names are designated based on where the weapon is fired from and where its target is located. But regardless of the particular positioning in a given scenario, all could lead to political as well as physically destructive consequences.

DEWs, a rapidly modernising laser technology termed the ‘microwave weapon’, have the ability of “adoption for ground, air, sea, and space warfare…[which] depends…on using the electromagnetic spectrum” to interfere with the intended target. DEWs are relatively inexpensive, making them the cost-friendly future of conventional combat. This potential heightens the perceived threat of DEWs to targets in space as well as on Earth. Essentially, Group Captain Pa Patil explains that the use of a DEW system in space “would be akin to a radar system, wherein the radar beam continuously illuminates a target and tracks it. A Directed Energy beam…will illuminate the target albeit with the beam intensity in excess of hundreds of Megawatts.” This means high energy waves could be used to disrupt or destroy their intended targets depending on the weapon user’s intent.

Another advantage of DEWs for space use is that the lasers are not only inexpensive, they can also carry out attacks with stealth and almost perfect accuracy. The versatility of DEWs gives them potential applicability as space-to-Earth weapons, Earth-to-space weapons, and space-to-space weapons. DEWs could be launched from Earth or space to attack a target in space, such as an enemy satellite, or they could be stationed in space to hit a target on Earth with surgical precision in near real-time. There are myriad ossibilities for this grade of weaponry – that is, if they are allowed to be in space or utilised on targets in space in the first place. Strengthening international treaties to ensure this threat remains out of the cosmos is crucial: it is the only way to prevent, or more realistically, legally condemn conventional acts of war above the atmosphere.

ASATs are another unfortunate reality. As mentioned previously, China and the US demonstrated the potential consequences of using ASATs by striking down some of their own. One outcome of these demonstrations is the resulting space junk that remains after the target has been hit. The Secure World Foundation found that leftover material from the 2007 Chinese anti-satellite strike “created a cloud of more than 3,000 pieces of space debris, the largest ever tracked, and much of it will remain in orbit for decades, posing a significant collision threat to other space objects in Low Earth Orbit.”

In addition to eliminating a targeted satellite’s functionality, the remnants of the destroyed satellite threaten to create additional harm to unintentional targets, which furthers the destruction caused by ASATs in space. Using missiles to attack enemy satellites, or even one’s own, has long-lasting, impending consequences on the objects orbiting alongside the remaining debris. Thus, ASATs have immediate as well as long-term capabilities for destruction in space, the latter of which is uncontrollable. In order to prevent intentional and unintentional damage to satellites and other technology in low-Earth orbit, ASATs must be illicit under international law.

Every day the imminent threat and possible outcome of a space-based attack by either state or non-state actors becomes graver. In a worst case scenario, strategic weapons fired successfully at enemy satellites can harm the targeted state’s security by impairing its defences, severely disrupting vital communication capabilities, and ensuring further upheaval. The potential catastrophe resulting from conventional attacks on space technology is thus significant. The disastrous effects of such a strike, alongside the space-based advantages of having missiles reach their targets on the ground faster, makes space weaponry an intriguing pursuit for those looking to innovate their military strategy.

This is why omitting a clause that bans all weapons, WMD or otherwise, from entering outer space is a reckless oversight that presents significant dangers. China and the US have their reasons to boycott restrictive language in international treaties concerning outer space. But choosing to embrace those treaties could be the only way to curb the threats of such a strike that each state fears. As leaders in the international community, it is the duty of the US and China to foster policy that fortifies international as well as interorbital peace – two realms undoubtedly intertwined. Thus, conventional warfare as it stands today is a possible reality for the cosmos. The international community has no choice but to embrace the goals of the Outer Space Treaty and expand its scope to explicitly eliminate conventional weapons deployment or conventional targeting of objects in the Earth’s orbit. Otherwise, mankind’s future pursuits in the last frontier – space – could change from exploratory to exploitative.

Home » Weapons In Space: Conventional War In The Cosmos? – Analysis