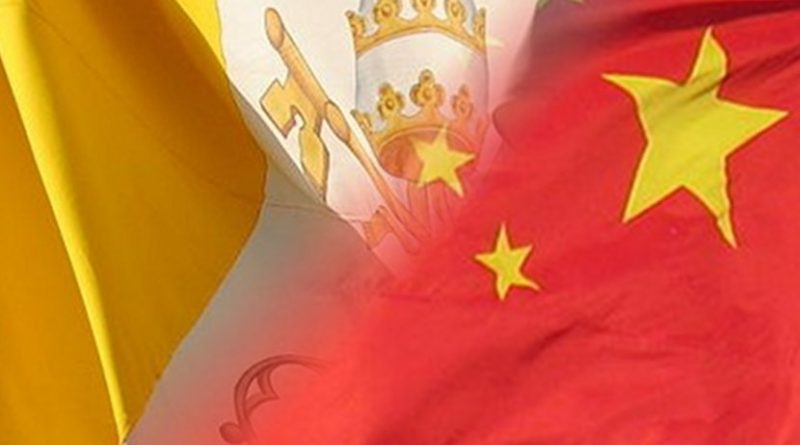 The Holy See’s provisional agreement with China on the appointment of bishops has drawn criticism from some U.S. religious freedom leaders, who contend that it concedes too much to power to the government and undermines efforts to protect other suffering religious groups.

“I confess that I am skeptical, both as a Catholic, and as an advocate for the religious freedom of all religious communities in China,” Thomas Farr, president of the Religious Freedom Institute, said Sept. 27.

“Earlier this year the Vatican quite properly expressed grave concerns about China’s comprehensive anti-religion policy, and its apparent goal of altering Catholicism itself.”

Farr is a former American diplomat who was the first director of the U.S. State Department’s Office of International Religious Freedom, from 1999-2003. He spoke before the U.S. House Committee on Foreign Affairs, Subcommittee on Africa, Global Health, Global Human Rights, and International Organizations. His comments addressed the state of religious freedom in China, especially for Catholics; the potential for further action from Congress and American diplomacy; and the Vatican-China agreement.

The Pope explained his decision in a Sept. 26 letter to China’s Catholics, acknowledging the “deep and painful tensions” centered especially on the figure of the bishop as “the guardian of the authenticity of the faith and as guarantor of ecclesial communion.” He said it was “essential” to deal first with the issue of bishop appointments in order to support the continuation of the Gospel in China and to re-establish “full and visible unity in the Church.”

He acknowledged the different reactions to the provisional agreement, both from those who are hopeful and from those who might feel abandoned by the Holy See and question “the value of their sufferings endured out of fidelity to the Successor of Peter.”

Farr, speaking to the congressional subcommittee, said he is concerned the provisional agreement “will not improve the lot of Catholics in China, much less the status of religious freedom for non-Catholic religious communities.” It risks harming religious freedom and “inadvertently encouraging China’s policy of altering the fundamental nature of Catholic witness.”

“In my humble opinion as a Catholic, and an advocate for religious freedom, the Vatican’s charism is to support that witness, as Pope Saint John Paul II did in Communist Poland,” he said.

Farr thought the process for choosing Catholic bishops was comparable to “the way parliamentary candidates are approved in Iran” where theologians vet prospective candidates for their loyalty to the government.

“Is it likely that the Chinese government would forward to the Vatican the name of a bishop faithful to the fundamental teachings of the Catholic Church?” Farr asked. “It seems far more likely that the bishop would be chosen at a minimum for his acquiescence to the regime, if not his fidelity to its anti-Catholic purposes.”

Johnnie Moore, a religious freedom advocate who now serves on the United States Commission for International Religious Freedom, told CNA he entirely supports “direct engagement with governments which have a checkered past when it comes to religious freedom, working together to find a better future.”

However, he thought many people outside of the Catholic community are “entirely confused by the timing and why the Holy Father agreed to – for all intents and purposes – demote faithful, persevering priests who had endured so much for so long.”

“Surely, (Pope Francis) could have found a way to have a meaningful relationship with the Chinese-appointed bishops without picking sides between his flock and those who’ve viciously opposed it for so long,” he said. “I’m also afraid that clever leaders in China will use this deal with the Vatican to distract the world from their resurgent, egregious mistreatment of other religious communities.”

Farr’s remarks tried to place China-Vatican relations in a historical context. In the centuries that Catholics have been in China, beginning even before missionary priest Matteo Ricci’s founding of a Jesuit mission in 1601, they have encountered “the assertion that Catholicism is incompatible with Chinese culture and must either be rooted out or adapted in ways that would change its fundamental nature.”

While Christianity became associated with European imperialism in the 19th and 20th centuries, against which many Chinese rebelled, it also suffered intense persecution after the Cultural Revolution after communist forces took power in 1949 under Mao Zedong.

China’s government attempted to absorb or destroy all religion. It expelled the papal representative to China and over a decade’s time engaged in “brutal treatment” of Catholics, Protestants and other religious groups, Farr said. This intensified under the Cultural Revolution begun in the 1960s.

“Priests and nuns were tortured, murdered (some were burned alive), and imprisoned
in labor camps. Lay Christians were paraded in their towns and villages with cylindrical hats
detailing their ‘crimes’,” he said. Catholic clergy and laity were among the tens of millions who died “terrible deaths.”

“While Mao proved that a policy of eliminating religion is unrealistic, his successors have constantly experimented in finding the ‘correct’ way to control, co-opt, and absorb religion into the communist state,” Farr continued. Since the 1970s, China’s religious policies have had “ups and downs as new Chinese leaders adapted policies to achieve the objective of control.”

“Not all Chinese policy involves overt repression of religion,” he said. In recent decades, China’s leaders have at times supported “religious groups perceived to be capable of consolidating Beijing’s absolute power.” According to Farr, this has sometimes meant praise for non-Tibetan Chinese Buddhism, Confucianism, and Taoism as China’s “traditional cultures.”

“Clearly those three groups pose a lesser threat to Communist rule than do the Uighur Muslims, Tibetan Buddhists, and Christians,” he said. “For the moment at least, it is the latter three religious communities that are the objects of continuing repression, especially the Uighurs.”

Citing State Department estimates of 70 million to 90 million Christians in China, with about 12 million Catholic, he said the growth of Chinese Christianity, especially through conversions to Protestant denominations, is “of great concern to the Chinese.”

Moving the State Administration for Religious Affairs to the United Front Work Department, which historically has been tasked with controlling China’s ethnic minorities, ensures “increased monitoring and control over the perceived threat posed by religion’s growth in China.”

Moore, a commissioner on the U.S. international religious freedom commission, had voiced astonishment that the Vatican would normalize its relationship with China “within one week of China so brazenly closing Beijing’s large Zion Church and just a few weeks after the United Nations, the New York Times and the U.S. State Department all revealed that China has forcibly placed as many as one million Muslims in re-education camps.”

“Honestly, I was in total disbelief. I said to myself, ‘not this, not now’ and then, I just prayed,” he continued.

Following a two-day review of China’s record in August, the U.N. Committee on the Elimination of Racial Discrimination has said that up to 1 million Uyghurs may be held against their will and without trial in extra-legal detention, on pretext of countering terrorism and religious extremism.

Farr voiced fear that the agreement reflects a “failed Cold War ‘realpolitik’ diplomacy” of the 1960s Vatican that was changed by St. John Paul II, a failure he blamed on a lack of realism about “the evil of communism.”

“It harmed the Church in parts of Eastern Europe,” he said. “The post-war Vatican was not then, and is not now, a secular power capable of changing the behavior of communist governments by dint of its political diplomacy.”

He contended that the Vatican is “the only authority in the world constituted precisely to address the root causes of totalitarian evil,” citing ST. John Paul II’s cooperation in the 1980s with U.S. President Ronald Reagan and U.K. Prime Minister Margaret Thatcher.

“The Holy See’s role should be now, as it was then, to press for human rights and, especially, for religious freedom for all religious communities in China,” he said, arguing that the Vatican’s charism is not diplomacy, but “witness to the truth about God and man.”

“As for China’s Catholics, the Vatican should demand nothing less than libertas ecclesiae, the freedom of the Church to witness to its adherents, to the public, and to the regime its teachings on human dignity and the common good.”

Farr suggested to Congress that the U.S. government should make the case to China that the growth of religion and religious communities is natural and inevitable in all societies. Efforts to kill it or blunt its growth are “impractical and self-defeating,” and persecution only slows economic development and increases social instability and violent extremism. Accommodating religious groups, by contrast, will help economic growth, social harmony, and stability.

China is a major force in the world and has enormous influence on global affairs and American interests, he said. U.S. policymakers do not typically address religious freedom in this context.
“Far more than a humanitarian issue, the way China handles its internal religious matters is of sufficient importance that the United States should make religious liberty a central element of its relationship with the East Asian nation,” he said.

The agreement between the Holy See and mainland China has met with varied reactions within China.

Bishop Stephen Lee Bun-sang of Macau wrote Sept. 24 that he was pleased to have learned of the agreement: “I thoroughly reckon that both parties have worked towards this provisional agreement after a long period of time with persistent effort of research and dialogue. This agreement is a positive move especially in favour of the communion of the Catholic Church in Chin and the Universal Church.”

Bishop Lee encouraged the faithful “to pray for the progress in Sino-Vatican relationship, with the hope that this provisional agreement may really be implemented, so as to contribute to and benefit the Chinese society and the Church’s charitable, pastoral, social, and educational apostolates, striving to spread the Gospel of Jesus Christ far and wide.”

But Cardinal Joseph Zen Ze-kiun, who has long been an opponent of rapprochement with the Chinese government, told Reuters just days before the agreement was reached that “they’re giving the flock into the mouths of the wolves. It’s an incredible betrayal.”

The Bishop Emeritus of Hong Kong said the consequences of the deal “will be tragic and long lasting, not only for the Church in China but for the whole Church because it damages the credibility.”

Mary Rezac contributed to this report.