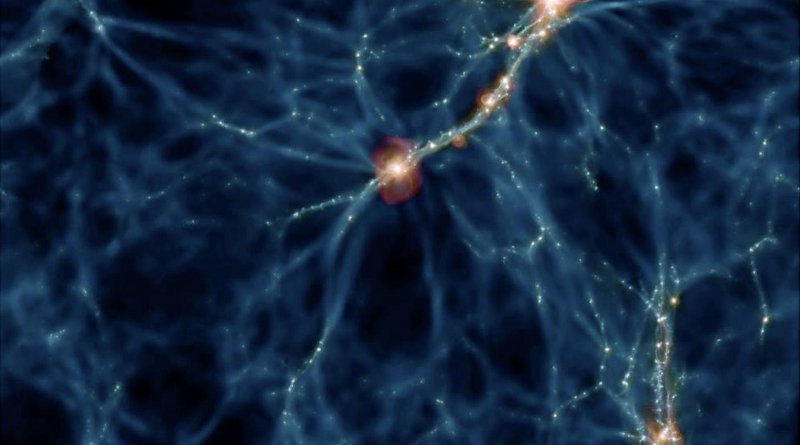 Some relationships are written in the stars. That’s definitely the case for supermassive black holes and their host galaxies, according to a new study from Yale University. The “special relationship” between supermassive black holes (SMBHs) and their hosts — something astronomers and physicists have observed for quite a while — can now be understood as a bond that begins early in a galaxy’s formation and has a say in how both the galaxy and the SMBH at its center grow over time, the researchers note.

A black hole is a point in space where matter has been compacted so tightly that it creates intense gravity. This gravity is strong enough that even light can’t escape its pull. Black holes can be as small as a single atom or as large as billions of miles in diameter. The biggest are called “supermassive” black holes and have masses equal to that of millions — or even billions — of suns.

SMBHs are often found at the center of large galaxies, including our own galaxy, the Milky Way. Although SMBHs were theoretically expected to exist, the first observational hints were detected in the 1960s; earlier this year, the Event Horizon Telescope released the first silhouette of a black hole in the galaxy Messier 87. Astrophysicists continue to theorize about the origins of black holes, how they grow and glow, and how they interact with host galaxies in different astronomical environments.

“There has been a lot of uncertainty regarding the SMBH-galaxy connection, in particular whether SMBH growth was more tightly connected to the star formation rate or the mass of the host galaxy,” said Yale astrophysicist Priyamvada Natarajan, senior investigator of the new study, which appears in the journal Monthly Notices of the Royal Astronomical Society. “These results represent the most thorough theoretical evidence for the former — the growth rate of black holes appears to be tightly coupled to the rate at which stars form in the host.”

Natarajan has made significant contributions to our understanding of the formation, assembly, and growth of SMBHs, with respect to their environs. Her work speaks to the underlying question of whether these connections are mere correlations or signs of deeper causation.

Natarajan and her team — first author Angelo Ricarte and Michael Tremmel of Yale and Thomas Quinn of the University of Washington — used sophisticated sets of simulations to make the discovery. Called Romulus, the cosmological simulation follows the evolution of different regions of the universe from just after the Big Bang until the present day and includes thousands of simulated galaxies that reside in a wide variety of cosmic environments.

The Romulus simulations offer the highest-resolution snapshot of black hole growth, providing a fully emergent and sharper view of how black holes grow within a wide range of host galaxies, from the most massive galaxies located in the center of galaxy clusters — very dense regions like crowded city centers — to much more common dwarf galaxies that inhabit the sparser suburbs.

“At a time when the drivers of black hole growth are unclear, these simulations offer a simple picture. They simply grow along with the stars independent of the galaxy’s mass, the larger environment, or the cosmic epoch,” said Ricarte, a former graduate student of Natarajan’s who is now a postdoctoral fellow at Harvard.

One of the more intriguing findings of the study, Ricarte noted, has to do with the way the largest black holes in the universe interact with their host galaxies over time. The researchers found that SMBHs and their hosts grow in tandem, and that the relationship is “self-correcting,” independent of the kind of environment they inhabit.