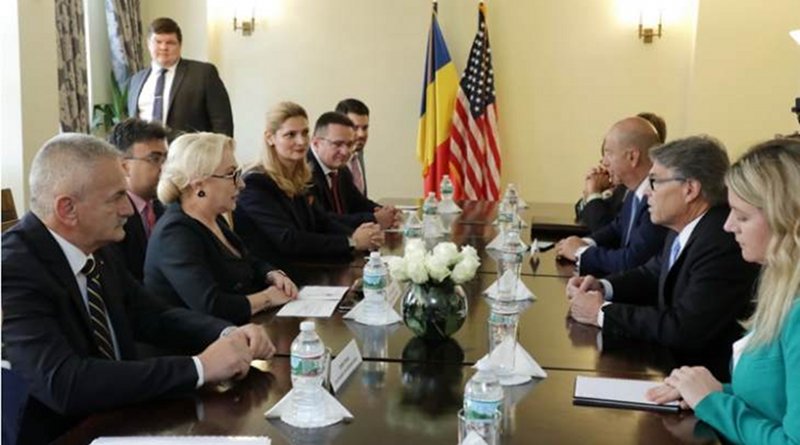 The meeting between the US Secretary of Energy and the Romanian Prime Minister (Image: Romanian Government)

The USA and Romania have signed a Memorandum of Understanding (MoU) to cooperate on civil nuclear energy. The agreement was signed by US Secretary of Energy Rick Perry and Romanian Prime Minister Viorica Dăncilă on September 24 during the United Nations Climate Action Summit in New York.

“This memorandum strengthens US-Romania ties in an area of cooperation that is deeply rooted in our mutual national security and strategic interests, and is supportive of our respective energy security goals,” the US State Department said. “It signals our long-term commitment to working together to develop Romania’s civil nuclear programme and jointly pursue the peaceful uses of nuclear energy.”

The State Department said its nuclear cooperation MoUs are “diplomatic mechanisms that strengthen and expand strategic ties between the United States and a partner country by providing a framework for cooperation on civil nuclear issues and for engagement between experts from government, industry, national laboratories and academic institutions”.

The Romanian government said the MoU will serve as a basis for encouraging bilateral cooperation in the promotion of state-of-the-art technologies in the nuclear field, radioactive waste management, development of the nuclear medicines sector, and research activities on the applicability of developing nuclear technologies in physics, biology, and agriculture.

US President Donald Trump and Romanian President Klaus Iohannis held a meetting in Washington on 20 August, after which they said: “We further urge our industries to work closely together to support Romania’s civil nuclear energy goals.”

Romania operates two Candu 6 reactors at the Cernavoda plant. Unit 1 started up in 1996, but work was suspended on a further four units in 1991. Unit 2 was subsequently completed and has been in operation since 2007.

Romanian utility Nuclearelectrica and China General Nuclear signed an MoU in November 2015 for the development, construction, operation and decommissioning of Cernavoda 3 and 4. A preliminary investors agreement was signed in May this year.

Home » Romania And US Agree To Nuclear Cooperation