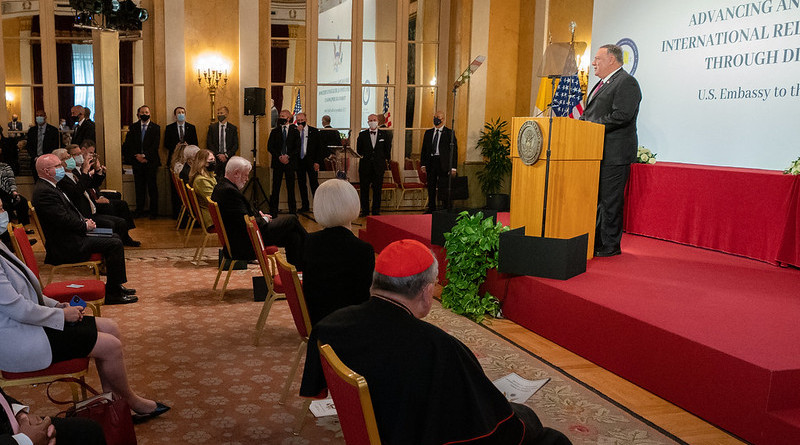 The Donald Trump administration has failed in its bid to try and influence the Vatican’s dealings with China, with one of Pope Francis’ most senior advisers accusing the US of trying to exploit the pontiff.

US Secretary of State Mick Pompeo had hoped to meet Francis on his current visit to Rome but was turned down, with Vatican Secretary of State Cardinal Pietro Parolin explaining that the pope does not receive political figures ahead of elections — a reference to the upcoming US presidential election on Nov. 3.

Instead, Pompeo met with critics of the pope at a conference organized by the US government ahead of a meeting with Cardinal Parolin and Archbishop Paul Gallagher, the Vatican’s No. 2 diplomat.

Cardinal Joseph Zen was also rebuffed by Pope Francis last week when he traveled to Rome to deliver a letter about the appointment of a new bishop for Hong Kong Diocese.

Pompeo has been strident in his criticism of the Vatican’s willingness to renew its September 2018 deal with Beijing on the appointment of bishops that has resulted in studied silence from the Holy See.

In a recent opinion piece for in the conservative Catholic magazine First Things, he was highly critical of Pope Francis’ papacy

“Two years on, it’s clear that the Sino-Vatican agreement has not shielded Catholics from the [Chinese Communist] Party’s depredations, to say nothing of the party’s horrific treatment of Christians, Tibetan Buddhists, Falun Gong devotees and other religious believers,” Pompeo wrote.

“Now more than ever, the Chinese people need the Vatican’s moral witness and authority in support of China’s religious believers.”

“We know that interpretation comes not only from the text but also from the context. Therefore, the context already tells you something regarding the intensions of the person who wrote and published this article,” Cardinal Parolin said.

In what may or may not be a coincidence, the Vatican made public its pitch to Beijing to extend the still-secret deal for another period before Oct. 22 when a new agreement is due to be concluded — or the old deal extended — on the day that Pompeo arrived in Rome.

Still, Pompeo’s critique had some merit as the Vatican has continued its silence on China’s human rights abuses amid serial revelations in recent weeks about the extent of concentration camps in Xinjiang, a similar program in Tibet, the hiring out of Uyghur workers as effective wage slaves and the continuing repression of freedoms in Hong Kong.

Some observers see Pompeo’s decision to wade into Vatican-China relations and make a quick visit to Rome as an attempt to show that “President Trump is on the side of those conservative American Catholics who worry about the Church’s direction under Francis and think he is soft on China,” as The New York Times put it.

Archbishop Gallagher, the Vatican’s secretary for relations with states, was asked if Pompeo was trying to manipulate the Vatican for political purposes and replied: “Well, that’s one of the reasons that the Holy Father is not receiving the secretary of state.”

Whatever the case, the Vatican is not for turning on China for the foreseeable future.

Three years after the assassination of Kosovo Serb opposition party leader Oliver Ivanovic, the still-unsolved murder case is plagued by