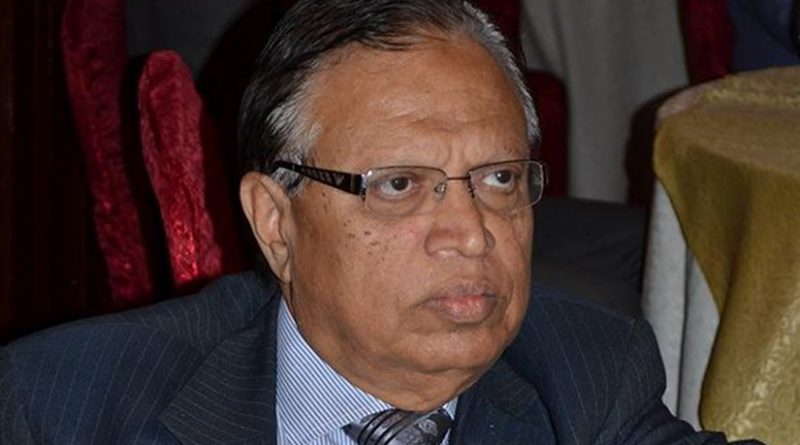 Muhammad Samiullah is currently associated with NBFI & Modaraba Association of Pakistan as Secretary General. From the platform of the Association, he has organized a number of workshops and seminars on different topics relating to the NBFI and Modaraba Sectors.

Samiullah is an active Member of FPCCI Standing Committee for Islamic Banking & Takaful. He is also a Member of the Arbitration Panel of Karachi Stock Exchange and holds a Master’s degree in Economics from Karachi University, Law Graduate and Dipomaed Associates of Institute of Bankers in Pakistan. He also has a Post Graduate Diploma in Islamic Banking & Takaful from Darul Uloom, Korangi. By profession Samiullah is a banker and has worked in Habib Bank Limited (HBL) in different disciplines for about 27 years, with his last posting in HBL as Vice President & Company Secretary, First Habib Bank Modaraba. He also officiated as Chief Executive of First Habib Bank Modaraba for quite some time.

Following are excerpts from an exclusive interview with Eurasia Review.

Eurasia Review: What is the concept of Modaraba?

Muhammad Samiullah: Modaraba is an Islamic contract of doing business in which one party participates with money and the other with skills and efforts. The party who provides money is called Rabb-ul-Maal or Investor and the other party who provides skills and efforts is called Modarib or Manager. The profit earned from the venture is distributed according to the ratio agreed between the parties whereas the financial loss is borne by the Rabb-ul-Maal and the Modarib is the loss of labour/efforts. It is one of the prime modes of Islamic financial system.

Eurasia Review: Briefly explain the history and evolution of Modaraba Sector in Pakistan.

Samiullah: In Pakistan, the process of Islamization of the economy was initiated in 1977 and in the light of the recommendations made by the Council of Islamic Ideology; the Government of Pakistan introduced certain changes in the Banking companies Ordinance. Modaraba Companies & Modaraba (Floatation & Control) Ordinance was promulgated in the year 1980 to provide legal framework for Islamic financial system. In 1981 Modaraba Companies & Modaraba Rules were framed for undertaking the business under Shariah compliant environment.

This was a major step through which the concept of “Modaraba Financing” was transformed into an Islamic Financial Institution in order to allow Modarabas to operate as legal corporate entities. The first Modaraba was floated in July, 1980 which was a specific purpose Modaraba. In the year 1985 three multipurpose Modarabas were established and then came a boom in the Modaraba sector and number of companies grew to as many as 52.

Eurasia Review: Modaraba Sector has the longest history but the number of players has reduced with the passage of time. What are the factors responsible for this contraction in numbers?

Samiullah: There are a number of factors responsible for contraction in size of Modarabas but the fact remains that number has declined to 25 from 52 over the years. The decline in the number of Modarabas is attributable to mergers and acquisition of smaller Modarabas by large Modarabas, commercial banks and other financial institutions. The consolidation in the industry is in-line with the objectives of the Securities & Exchange Commission of Pakistan which regulates the sector. Moreover, about six dormant Modarabas are in the process of winding up out of which one Modaraba has been acquired by a business group in the recent past.

Eurasia Review: The general perception is that Modaraba Companies pay attractive dividends, but investors refrain from investing in these certificates as is evident from number of certificates daily. How do you explain the phenomenon?

Samiullah: Modaraba is a profitable sector of the Islamic financial industry of Pakistan. Modarabas have maintained a record of healthy profit distribution during last many years. Modarabas posted an aggregate profit of Rs1,448 million for the year ended 30th June, 2014. Out of 25 Modarabas, 20 declared profit and 18 paid cash dividend, the highest being 50%. Most of the members have announced results for the period ended 30th June, 2015 which are very attractive and it is expected that the aggregate profit for 2015 would surpass that of the previous year.

It is a fact that Modarabas pay attractive cash dividends to their certificate holders, investors refrain from investing in this shariah compliant mode of financing , the reasons are; 1) Normally Modaraba Management Comppanies holds 10 to 20 percent of total certificates issued and remaining are held by the general public/institutions. Due to attractive dividend payout most of the investors prefer to hold, unless there is any need to sell these off; 2) Due to Islamic modes, foreign investors are not involved in the trading of the Modaraba certificates and 3) there is a general lack of interest of investors in investing in non-banking companies and Modarabas despite paying high dividend.

Eurasia Review: What are the benefits of investing in Modarabas?

Samiullah: Following are the advantages of investing in Modarabas:

i. Halal Business: Modaraba is the business model which is based on true Islamic practices duly scrutinized and approved by the Religious Board appointed by the Federal Government. It provides profitable investment opportunities to the stakeholders who are looking for Halal profits on their investments according to Islamic Shariah.

ii. Diversified Business: The diversity of the Modaraba concept provides a unique universe of business opportunities to the sector, including financing, trading, manufacturing, equipment rental, participation in property development, project management, portfolio management, imports and exports and distribution business. Such a diverse canvas of activities is not available to any other entity in the Islamic financial regime.

iii. Tax benefit: The income earned by the Modarabas, other than the trading modarabas, is fully exempted from income tax provided they distribute 90% of their profits amongst the certificate holders. For trading modarabas, the maximum tax rate is 25%.

iv. Maximum Distribution of Profits: As an investor of a Modaraba one may expect getting maximum dividends as high as 90% of the profit of the Modarabas is distributed among the certificate holders in order to avail the benefit of tax exemption.

Eurasia Review: How does one invest in Modarabas?

Samiullah: Investing in Modarabas is very similar to that of investing in shares of public limited companies.

(a) Initial Public Offering: The general public after carrying out due diligence of future prospects may subscribe to Certificate of Modarabas when these are first time offered for public subscription.

(b) Direct Buying from Stock Market: After the initial public offering, an investor can buy Modaraba Certificate through a broker as these are quoted on the stock exchanges just like shares of other listed companies.

Samiullah: The Modaraba Management Companies and Modarabs are working under the following regulatory framework:

Eurasia Review: Tell us about the Shariah Compliance in Modaraba Sector.

Samiullah: Modaraba being an Islamic financial institution requires compliance of the Modaraba Ordinance, 1980, Modaraba Rules, 1981, Prudential Regulations and Guidelines prescribed by Shariah for Modarabas for its execution. To achieve this objective the Securities & Exchange Commission of Pakistan (SECP) has constituted a Religious Board which approves the business of Modarabas and provides direction to achieve the Maqasid-al-Shariah under the control of Registrar Modaraba. Registrar Modaraba is responsible for ensuring compliance with all the regulatory and shariah requirements by the Modaraba Sector.

In order to ensure compliance with the Shariah Principles, the Registrar Modaraba vide Circular No.8 of 2012 dated 3rd February, 2012 issued Shariah Compliance and Shariah Audit Mechanism after extensive consultation with the NBFI & Modaraba Association of Pakistan, a representative body of Modarabas, Leasing Companies and Investment Banks. The Shariah Guidelines provides a detailed framework for compliance of shariah principles. According to these Guidelines every Modaraba is required to appoint a Shariah Advisor who will look after their shariah issues and provide them guidance on an ongoing basis. Keeping this need of Modarabas in view, NBFI & Modaraba Association of Pakistan has prepared a Shariah Compliance Guide to help Modarabas in setting up their Shariah Compliance Mechanism.

Eurasia Review: What is the outlook of Modaraba in Pakistan?

Samiullah: Keeping in view the growth of Islamic finance in the country, there are sufficient reasons to believe that Modaraba model has good potential to expand the business within the Islamic financial market in various sectors of the country for example trading, manufacturing, agriculture, non-banking financial sector etc. At present, Modarabas are mostly located in the big cities like Karachi, Lahore and Islamabad.

There are a number of cities where the financial activities increased manifold but Modarabas were not able to exploit the potential. It is desired to expand the branch network of Modarabas in the small and medium size cities where enormous potential exists. It is also desired to explore the new markets and introduce new and innovative products and services for the growth of the sector. It is the need of the time to diversity the business operations, introduce new products, develop resource mobilization campaigns, concentrate on Shariah Compliance and Shariah Audit Mechanism for the future growth.

During the year 2015, one Modaraba named Sindh Modaraba was established by the Sindh Government with a Paid up Capital of Rs450 million. As there is a great potential in the Modaraba sector, some of the Business Group are also keen in establishing Modarabas. Lately, SECP has approved “Awwal Modaraba” sponsored by Pak Brunei Investment Limited with a Paid up Capital of Rs1.00 billion. Some other groups are also planning to establish Modarabas which will further strengthen the Sector.