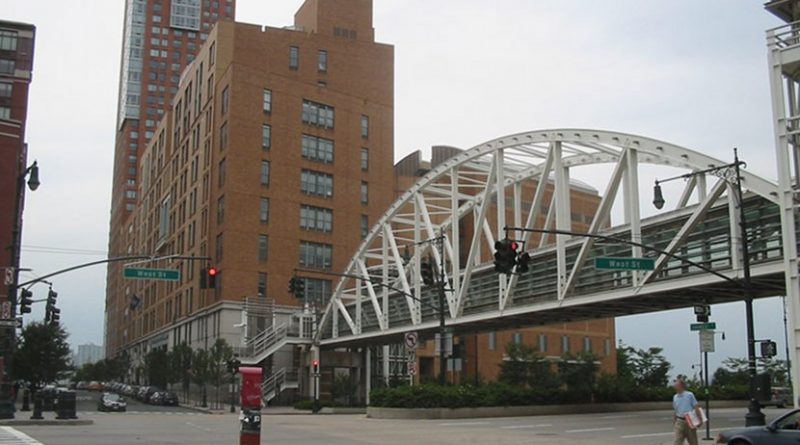 File photo of the Tribeca Bridge at Chambers Street, New York, under which the vehicle driven by the perpetrator collided with a school bus. Photo by A1111, Wikipedia Commons.

At least eight people were killed Tuesday and more than a dozen others were injured when a man drove a rented truck onto a busy bike path in New York City.

“Based on information we have at this moment, this was an act of terror, and a particularly cowardly act of terror aimed at innocent civilians,” New York Mayor Bill de Blasio said at a news conference.

New York Governor Andrew Cuomo called it a “lone wolf” attack, saying there’s no evidence to suggest it was part of a wider plot. The incident took place near the World Trade Center memorial in lower Manhattan.

A paintball gun and a pellet gun were later found at the scene. He was shot in the abdomen by police and taken into custody.

He underwent surgery and is expected to survive.

Argentina’s foreign ministry said five of its citizens were among those killed. A statement identified them as natives of the city of Rosario, who were in New York with a group celebrating their 30th anniversary of graduating school.

Police said the driver shouted “Allahu Akbar,” Arabic for “God is great” when he got out of the truck. But when O’Neill was asked whether the suspect shouted the phrase, he replied: “Yeah. He did make a statement when he exited the vehicle,” though he declined to elaborate.

The New York Police Department said they will increase the number of police throughout the city “out of an abundance of caution.”

Law enforcement officials, who refused to be identified, told media outlets the suspect was was a 29-year-old immigrant from Uzbekistan named Sayfullo Saipov, who entered the U.S. in 2010.

The Cato Institute told VOA only about 40,000 Uzbeks have entered the United States as migrants in the last 20 years, of those only 2 percent arrived as refugees.

David Bier, a policy analyst at the Washington-based think tank, said he believed this is the first time an Uzbek national has killed anyone on U.S. soil in a terrorist attack.

As of March 2017, three Uzbek nationals had been convicted of terrorism offenses. Ulugbek Kodirov who entered as student visa holder in 2008 and later radicalized on the Internet was convicted of threatening to kill President Obama in 2011. Fazliddin Kurbanov who entered as refugee in 2009 attempted to build bombs for an attack in 2013. Abdurasul Juraboev who immigrated after winning the green card lottery in 2011 was convicted of attempting to join ISIS in Syria in 2015.

White House press secretary Sarah Sanders said President Donald Trump had been briefed on the incident and will be continually updated as more details are known. “Our Thoughts and prayers are with all those affected,” she said.

Trump later tweeted, “We must not allow ISIS to return, or enter, our country after defeating them in the Middle East and elsewhere. Enough!” Followed by: “I have just ordered Homeland Security to step up our already Extreme Vetting Program. Being politically correct is fine, but not for this!”

Department of Homeland Security said Acting Secretary Elaine Duke had been briefed and the department was “closely monitoring the situation.”

Argentina’s Foreign Ministry said “Argentine citizens died” in the attack, but it hasn’t said how many.