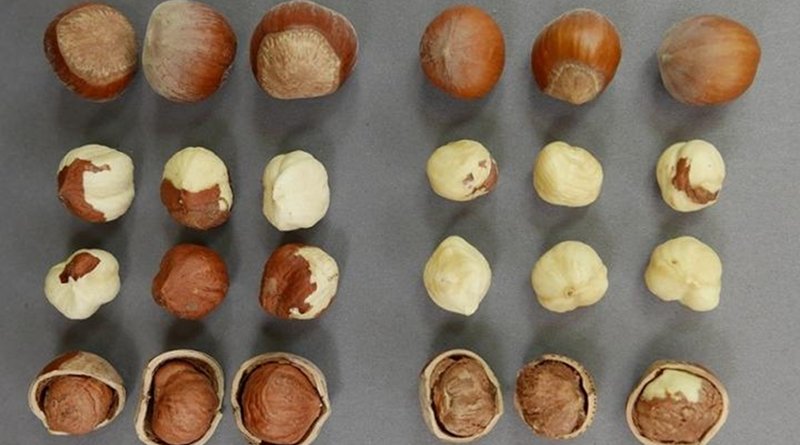 Researchers from Oregon State University have completed an examination of, and have released, a new cross-bred hazelnut cultivar known as ‘PollyO’, and they have discovered it to be a rising star of hazelnuts grown within the United States.

Shawn Mehlenbacher, David Smith, and Rebecca McCluskey released the Corylus avellane L. hazelnut ‘PollyO’ and compared it to the traditional leaders in the marketplace. Their findings are in the article “‘PollyO’ Hazelnut” published in HortScience.

‘PollyO’ is a new hazelnut variety from the Oregon State University Breeding Program that combines a high level of resistance to eastern filbert fungal blight along with high nut yield.

The hazelnut trees performed well in the Oregon Willamette Valley and have been recommended for other areas with a similar climate. Trees of ‘PollyO’ are now available from several nurseries in Oregon.

‘PollyO’ was released for the blanched kernel market and has been embraced as either a complement or as an alternative to the traditional cultivars of that established and lucrative market due to it high nut yield with small to medium nut size. It also boasts a high kernel percentage, early nut maturity, and excellent kernel quality.

Other beneficial traits exhibited by ‘PollyO’ are that the nut shape is nearly round and lends itself well to sizing and cracking and that the shells are thin and easy to crack.

Most important, tasters consider the kernel quality to be excellent, well-suited for use in baked goods and chocolate products, and worthy of a premium price. Also, ‘PollyO’ kernels are sized within a range preferred by major chocolate makers.

Home » A New Hazelnut Has Cracked Its Competitive Marketplace