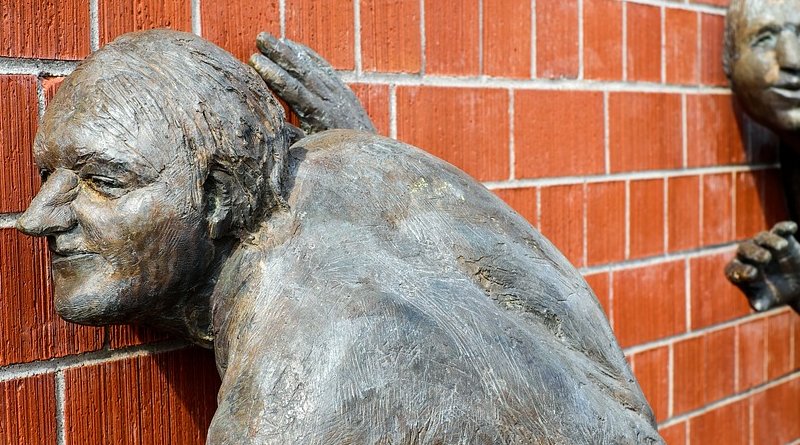 I remember only a few things from my brief Soviet childhood – how I brought meat patties as a bribe to my teacher during the perestroika, how I drank from-the-tap kvass with my yard buddies (rumors had it that the kvass was full of dead frogs), ate a radiator-crisped treat made from the “brick” bread and drank lemonade produced from jam and soda that had to be finished as fast as you can while “there are still bubbles”. For some reason, most of my memories are about food – Gogel-mogel and French toast, sugared water, the “brick” bread, etc. Now, looking back at that distant past, it seems as the most bizarre culinary experience in the world. Even grasshopper snacks in South Asia seem more appropriate than my childhood treat – cucumber with sugar.

This was the reality of living in the Soviet Union. The society – having bested capitalism – was plunged into a sea of poverty and grayness and forced to look for any way of embellishing the miserable everyday existence. For children, these were sweet treats made from everyday (and sometimes utterly incompatible) produce; for adults – a bottle of booze, and for others also the lies of the communist party about the “advantages” of socialism. Those who were not satisfied with eating fake sweets and drowning their sorrows in alcohol often chose the fake ideology preached by Moscow and became its close allies. This story too will be about a country that bought into Moscow’s lies and what all of that resulted in.

A frog is not a toad; Bulgaria – not abroad

During Soviet times, Bulgaria – although not officially one of the 15 “friendly republics” – was rarely seen as being abroad. The friendship between Moscow and Sofia was mutual: the Soviet elite visited the Bulgarian mystic Baba Vanga, while the cheka was listening to everything with the help of their partners from Sofia. The privileged part of the Soviet society relaxed on the Black Sea coast in Varna while Bulgarian farmers fed their hungry neighbors with pickled cucumbers, tomatoes and other goods. The USSR exported agricultural equipment to Bulgaria, and Bulgaria sent its estrada stars to Russia.

Despite the USSR long being six feet under and Bulgaria having switched the sweet lies of communism with capitalism and the European Union, cooperation between Moscow and Sofia, at least until October this year, has remained the same. However, the status quo currently seems a bit shaken, which means Sofia finally has the chance to escape the embrace of its large Slavic brother.

I am talking about the two espionage cases that unfolded in September and October. In both cases it turned out that Russia, despite its friendly facade, is using Bulgaria as a platform for spying on the EU and NATO, as well as the friendly and naïve Bulgarians themselves.

In September, news channels reported that director of a local NGO and deputy Nikolay Malinov was accused of spying for Russia. Posing as a public activist, he was working for Moscow’s secret services with the aim of damaging Bulgaria’s relations with the EU and NATO. Malinov had ties to the Russian Strategic Research Institute, which in reality operates as an appendage to the Russian Foreign Intelligence Service (SVR) and is often used by Moscow to launch its operations in its near abroad. There is no additional information on Malinov in the media.

This week, Bulgaria was shaken by another spy scandal, which resulted in a Russian diplomat (resident spy) being expelled from the country. Details of the incident have not been disclosed, but one thing is certain – despite the superficially close relations, all this time Russia has been engaging in the same espionage activities in Bulgaria as it would in countries much more unfriendly towards Moscow.

Despite Bulgaria being an EU and NATO member, it has always, if not defended the Kremlin, then at least taken a neutral and reconciliatory position towards it. A notable example is the expulsion of Russian diplomats in connection with the poisoning of the Skripals – Sofia simply refused to expel anyone because it did not want to anger its strategic partners in Russia. It seems that the pro-Kremlin politicians had miscalculated, and the activities of Russian intelligence services became so disruptive that the Bulgarian Ministry of Foreign Affairs, with its tail between its legs, was forced to admit that Russia is spying and doing so quite shamelessly.

Learn from your mistakes

What is the moral of the story currently taking place in Bulgaria and what can Latvia learn from it? Firstly, Russia (just as the USSR) is not familiar with the word “allies”. Moscow has always viewed international relations through the prism of realism, and as a result it engages in espionage and other activities against friendly nations (particularly its neighbors) with the aim of weakening them. Secondly, Moscow treats bilateral relations exclusively as a zero-sum game, i.e. Moscow believes that in any bilateral relations there can be only one winner (Russia) and one loser (in this case, Bulgaria) – mutual benefit is not possible. Thirdly, no matter what Putin and other Russian politicians say about “friendship between nations”, the Russian regime in its current blatantly chauvinistic from views any other nation as inferior to Russians. The Kremlin does not care one bit if Bulgarians actually are a close nation to Russians – in the greater picture they are just pawns who have to work for the Russian empire.

The case of Bulgaria once again reminds us that Russia is not a country you can establish normal relations with. You do not have to go to war with Russia, you can try to avoid arguments and coexist peacefully, but it is impossible by definition to establish close relations with Russia – it is and will be an unfriendly nation. Russia continues lying, spying and interfering in the domestic affairs of other countries on an unprecedented scale, while on the international stage its leaders tell fairytales of peaceful and friendly coexistence.

Here in Latvia, we experience this regularly. Every day Russian activists brainwashed by the Kremlin cry about censorship and Russophobia in Latvia, at the same time freely engaging in protests and slandering Latvia online. It is the same with Russian television – each day you hear that fascists are marching the streets in Latvia and hunting Russian-speakers, when in reality nearly half of employers demand knowledge of the Russian language. Moscow vilifies Latvia for its unwillingness to cooperate, but it did not forget to impose sanctions on our producers. Wherever you look you see that Russia is a two-faced and lying country ready to backstab any of its allies. I believe that starting with autumn this year many Bulgarians will have reached the same conclusion.

However, despite the gained experience and evidence numerous Latvian politicians continue lying to others and themselves, saying that it is possible to be friends with Russia. Political parties like Concord or the Latvian Russian Union gladly mumble about becoming closer with Russia. Even the seemingly Latvian party the Union of Greens and Farmers along with some independent members of the parliament (Aldis Gobzems, Didzis Šmits, etc.) urge the public to be more open towards cooperation with the “big bear” in the east. And you cannot blame them, because some of our 100 wise heads are no different from the asshat agent Malinov detained in Bulgaria.