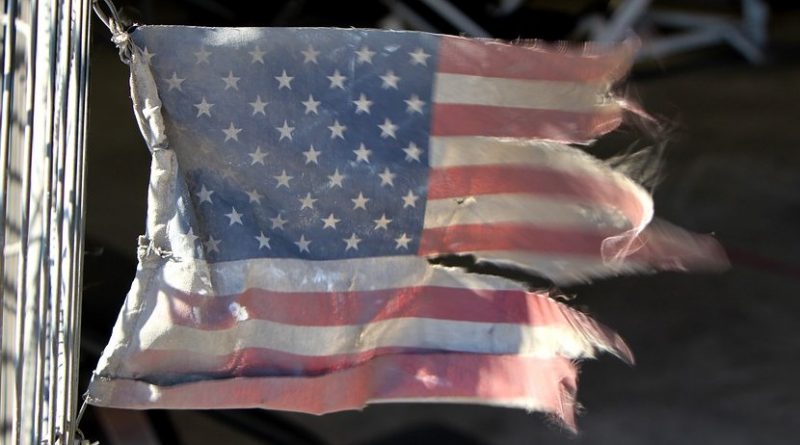 If it seems like the topic of secession is increasingly in the media in recent years, it’s not just your imagination. From “Calexit,” to Brexit, to Catalonia, and to Scottish independence, the topic of breaking up nation-states into smaller pieces has increasingly forced itself into the foreground.

In the United States, the discussion has become muted in the past two years—but has not disappeared—as activists on both left and right have decided to wait and see how the next election turns out. But expect a resurgence of secession talk from the side that loses the presidency, once the race is over.

But thanks to relentless growth in federal power over American states and American communities, this issue is unlikely to go away. It appears that Americans are increasingly fearful that national majorities and national political institutions can be used to attack the culture, legal rights, and lifestyles of those who might find themselves as part of a national majority.

Unless these powers are scaled back, it is increasingly likely that secession or some other form of national disunion will become the last option for many who fear the destruction of self-rule and self-determination within the United States.

These trends have certainly not gone unnoticed by longtime observers of American politics and law.

In his new book American Secession: The Looming Threat of a National Breakup, legal scholar F.H. Buckley suggests “[w]e’re now living in a secessionist moment in world history,” which is paving the way for dissenters both in the United States and elsewhere to move their nations toward a secessionist future.

Buckley outlines three larger historical factors behind current realities. The first is the decolonization trend that began in the mid twentieth century. Buckley notes “Like the American Revolution, the grant of independence [to colonies] was a form of secession form the colonial power.”

The second reason is the end of the Cold War. It’s been thirty years since the Berlin Wall came down and nearly 30 years since the Soviet Union collapsed. But political trends have a way of taking decades to become apparent. As the entire system of Western and Soviet alignment disintegrated following the end of the Cold War, twenty-four new countries emerged. The lack of a Soviet threat, and the greater flexibility offered to small nations in a post-Soviet world encouraged secessionists to push their cause.

The third factor is the increase in international trade and the relative decline of trade barriers in recent decades. In a world where even small nations can access international markets with relative ease, the relative cost of leaving a large nation-state declines.

The United States: An Overgrown Nation?

But how does this relate to the United States specifically?

According to Buckley, much of America’s secessionist sentiment arises from the fact that the United States is such a large country.

Many Americans, however, are still unaware of the sheer enormity of the US, both in terms of physical size, and in population. Only two other countries on earth—India and China—have larger populations than the United States, which now is home to more than 330 million people. The US is the fourth largest in physical size. Other global powers, such as Germany (83 million), and the United Kingdom (66 million) are far smaller. States like Texas, Florida, and California would all be larger than most European countries if they were independent nations.

Moreover, among the world’s largest nations (including Indonesia, Pakistan, Brazil, and Nigeria) the US is the only wealthy, fully industrialized nation.

Clearly, being big is not in itself a recipe for wealth or success.

Well aware of the bigness of the United States, Buckley delves into whether or not size is a positive or a negative factor in the US’s stability and quality of life.

His well-researched findings suggest that bigness comes with many downsides in terms of corruption, reported happiness levels, wealth, and the tendency for the regime to become overly aggressive in foreign policy.

As Buckley points out, there is much evidence to suggest that the successor states of a smaller group of American independent nations would be wealthier, more peaceful, and more free. Or, as Buckely concludes “If there are advantages to bigness, the costs exceed the benefits. Bigness is badness.”

But perhaps most important of all to the secession question is the fact that a country as large as the United States contains numerous regional and cultural groups that are different enough and remote enough from each other as to produce a sense of separateness rather than unity.

Contrary to the protestations of old-school pundits who continue to insist Americans are united by some sort of ethereal common creed or culture, the reality is far different. Buckley writes:

Countries threaten to split apart when their people seem hopelessly divided….We’re less united today than we’ve been at any time since the Civil War, divided by politics, religion and culture. In all the ways that matter, save for the naked force of law, we are already divided into two nations just as much as in 1861. The contempt for opponents, the Twitter mobs, online shaming and no-platforming, the growing tolerance of violence—it all suggests we’d be happier in separate countries.

Americans don’t even seem to be interested in compromise anymore, Buckley contends, noting in one example that the Left’s position on the current administration is far beyond mere caricature: “Not merely is Trump a white nationalist, but so are all his supporters and we’re not about to forgive and forget them….When that’s how people feel, they’re past talking to each other.”

Whether It’s Secession or “Secession Lite,” We Need a Lot More Decentralization

So what’s the solution to all this vitriol?

Buckley explains that among the most reasonable solutions is secession. Failing that, the nation must seriously begin to contemplate at least some sort of major move toward decentralization.

That is, if secession still seems implausible to many, the very least that must occur is for the separate states and regions of the US to obtain true “home rule” through strategies like “interposition” in which local authorities refuse to enforce federal laws and edicts. (We’ve already seen this strategy in action with recent state efforts to refuse enforcement of some federal drug laws.) Another strategy is a constitutional convention by which the US constitution could be shifted more in favor or state and local autonomy within a national union.

But no matter what strategy of deunifying the country is employed, Buckley contends, it will be necessary to significantly limit the ability of a single national government to exercise its currently vast powers over the internal affairs of the US’s member states.

For Buckley, it no longer makes sense to govern all Americans under one set of regulations, laws, and legal precedents. It doesn’t make sense for a tiny number of federal judges and federal politicians to make decisions for 330 Americans. Government at this level of bigness simply can’t reflect the needs and preferences of its population. On this, Buckley points out that even the Supreme Court has agreed “A decentralized government….will be more sensitive to the needs of a heterogeneous society.”

Ultimately, it appears that Buckley comes down slightly in favor of the more limited options underlying his “secession lite” plan. Naturally, as a staunch decentralist, I find this rather disappointing. But there is no denying that Buckley’s proposed “secession lite” would certainly be a step in the right direction.

My biggest criticism, however, comes not from Buckley’s lack of secessionist fervor, but from the fact he at times appears to conflate the legal challenges of secession with the political ones.

In all likelihood, the legal problems associated with secession and disunion are likely to become less relevant over time as the politics of the situation become more urgent and more strained. In other words, once nations reach the point of widely contemplating a breakup, what is legally possible tends to become far less important than what is politically possible or necessary. For example, when the various republics of the old Soviet Union began breaking away from Moscow, there was little concern over whether or not these moves were legal. Seeing that independence was at hand, Lithuania wasn’t about to slam on the brakes in order to make sure its bid for independence checked out with the Soviet lawyers. What did matter was the fact the Lithuanian regime found ways to break away from Moscow without having to bow to the nominally binding statutes then in place.

Thus, when Buckley suggests that Supreme Court rulings like Texas v. White, which found that secession is unconstitutional, will continue to be key in guiding future debates over a national divorce, I’m skeptical. Things are likely to be a whole lot more intellectually and legally messy than consulting legal precedents and holding orderly constitutional conventions. After all, if we can all agree to sit down together and calmly discuss what must be done to legally bring about a new postconstitutional national order, then why bother with breaking up the nation at all?

But this is a fairly minor problem in Buckley’s text.

Overall, American Secession offers an excellent introduction on the legal, political, and historical foundations of American secessionist movements—both past and present—as framed by someone who is coming at the problem very a very mainstream position within the American conservative movement and within academia. What’s more, Buckley is attempting to take a pragmatic look at secession far outside romantic notions from the past, and in line with the realities of the twenty-first century. His conclusion is “the barriers to secession are weak, the case for a breakup is strong.” The more others agree with this notion, the more national disintegration will become inevitable.

Home » The Benefits Of Secession Are Becoming Increasingly Obvious – OpEd