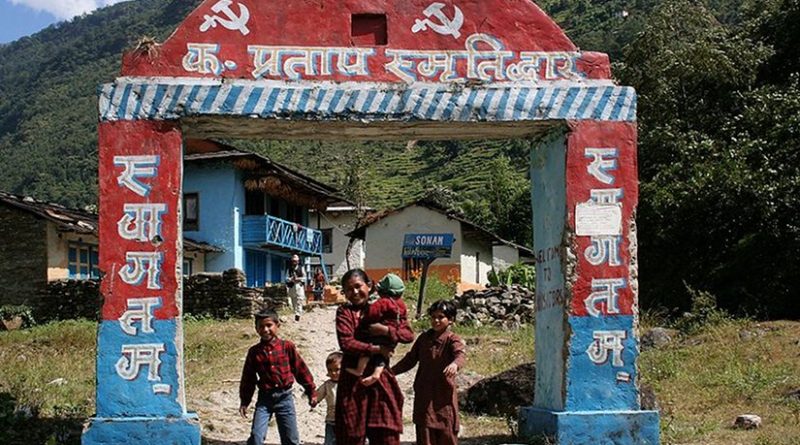 A family in maoist-controlled valley in Nepal. Photo by Pavel Novak, Wikimedia Commons.

The expansion and construction of a road network in the border areas between Nepal and China presents new opportunities for Nepal to promote the overall development of its trade. Nepal signed a boundary treaty with China in 1961 by constructing a road linking Kathmandu with the Tibetan border town of Kodari during King Mahendra’s official visit to China. Kodari lies on the Nepal-China border; China started building the Kathmandu-Kodari road in 1963 and it officially opened in 1967. This road provided a direct strategic connection between China and Nepal through the difficult terrain route of Tibet. Therefore, an open border between Nepal and China has direct implications for India as well. This article attempts to focus on the significance of this road both in terms of economic and strategic importance. It also highlights the balance of trade taking place between Nepal and China, and what Kodari means for Nepal, China and India.

Kodari road is connected by an all-weather gravel road on both sides of the border. It was only two lane road. According to a June 2011 report by Republica Business and Economy, the Nepalese government is planning to widen the Kathmandu-Kodari road from a two-lane road to a six-metalled road so that Nepal can benefit from linking with China. Other than Kodari road, there are a few other routes through which trade between the two countries is taking place. But all these are informal and not all-weather roads. One notable feature of the Nepal-China boundary is the complete absence of border check posts, except at Kodari road. For this reason, it plays a most crucial role for enhanced commerce between Nepal and China.

It has been seen in the recent times that with the deterioration of India-Nepal relations, Nepal has sought a countervailing force in China. The volume of Nepal-China trade is increasing every year but the balance of trade is in favour of China. According to Nepal’s Trade and Export Promotion Centre’s statistics, Nepal’s export to China declined by 55 per cent to NRP 360 million during the year 2010. However, Nepalese imports have increased by 0.8 per cent to NRP 26.75 billion (Kathmandu Post, 10 May 2011). Significantly, the import and export of commodities is taking place primarily through Kodari road.

Moreover, China has been increasingly involved in constructing other infrastructure projects in Nepal like Lumbini, the Pokhra-Baglung road as well as extending the railway line from Lhasa to Khasa on the Nepal-Tibet border. However, most of the labourers working on these projects are Chinese demonstrating that these projects have not created job opportunities for the Nepalese. One of China’s major aims in developing infrastructure and increasing economic ties with Nepal is to weaken India’s influence in the country, which India has enjoyed until very recently. Chinese Premier Wen Jiabao is stipulated to visit Nepal on 20-22 December 2011 which signals the strengthening of bilateral ties between China and Nepal.

Nepal has welcomed all the support given by the Chinese and is looking forward to stronger ties between the two. It is believed that with this influence China may be able to interfere in the internal matters of Nepal in the near future. Given Chinese access through Kodari road, the Indian heartland would consequently become easily accessible through the open Indo-Nepalese borders. India should therefore renew its policy with Nepal to regain lost power by developing trade links as well as start face-to-face dialogue. India should also engage with Nepal’s business companies and strategists to raise and discuss relevant Indian concern in the region.

India still is the largest investor in Nepal and accounts for two-thirds of foreign investment while only ten per cent is accounted for by China. During his recent visit to India, Nepalese Prime Minister Dr Bhattarai summed up the Indo-Nepalese relationship by saying that “Nepal and India share a very unique relationship as it is sandwiched between two huge countries of India and China. We are actually India-locked, as we have an open border on three sides.” This announcement gives India a hope that the present government is perhaps softening their attitude to India. Kodari road can also be taken as a cost effective link between the Asian giants, with Nepal playing a facilitating role for smooth trade between them.

One thought on “Kodari Road: Implications For Nepal, China And India – Analysis”