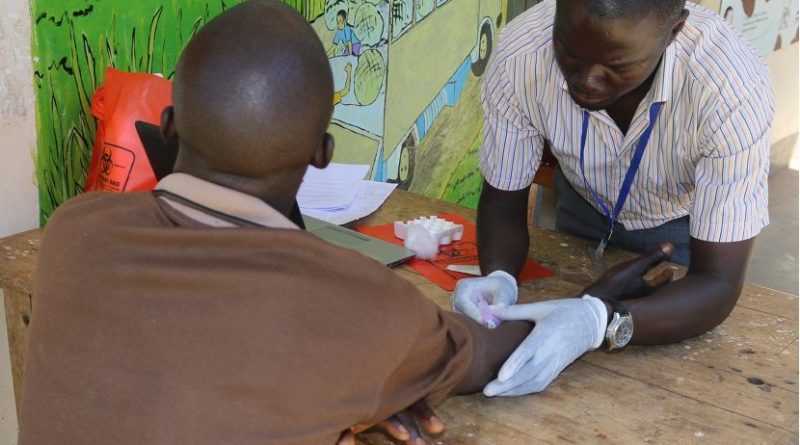 A study published in the New England Journal of Medicine provides real-world evidence that implementing a combination of proven HIV prevention measures across communities can substantially reduce new HIV infections in a population.

Investigators found that HIV incidence dropped by 42 percent among nearly 18,000 people in Rakai District, Uganda, during a seven-year period in which the rates of HIV treatment and voluntary medical male circumcision increased significantly.

The HIV prevention strategy whose impact was observed in the study is based on earlier findings by the National Institutes of Health (NIH) and others demonstrating the protective effect of voluntary medical male circumcision for HIV-uninfected men and of HIV-suppressing antiretroviral therapy (ART) for halting sexual transmission of the virus to uninfected partners. The strategy is also based on studies showing that changes in sexual behavior, such as having only one sexual partner, can help prevent HIV infection.

“Before this study, we knew that these HIV prevention measures worked at an individual level, yet it was not clear that they would substantially reduce HIV incidence in a population–or even if it would be possible to get large numbers of people to adopt them,” said Anthony S. Fauci, M.D., director of the National Institute of Allergy and Infectious Diseases (NIAID), part of NIH. “This new analysis demonstrates that scaling up combination HIV prevention is possible and can turn the tide of the epidemic.”

NIAID co-funded the research, and NIAID investigators oversaw all laboratory operations. The President’s Emergency Plan for AIDS Relief (PEPFAR) funded the provision of combination HIV prevention, including ART and circumcision services, during the period observed in the study.

The newly reported research involved nearly 34,000 people ages 15 to 49 years residing in 30 communities that participate in the Rakai Community Cohort Study (RCCS) conducted by the Rakai Health Sciences Program in Uganda. With funding from NIH and others, this program promoted HIV testing, ART and voluntary medical male circumcision to study participants. Every one or two years from April 1999 until September 2016, participants were tested for HIV and surveyed about their sexual behavior, use of HIV treatment, and male circumcision status. The authors of the new paper analyzed these survey data under the leadership of M. Kate Grabowski, Ph.D., an assistant professor at The Johns Hopkins University School of Medicine in Baltimore and an epidemiologist with the Rakai Health Sciences Program.

As an apparent consequence of these increases, particularly in ART use and voluntary male circumcision, the annual number of new HIV infections in the cohort fell from 1.17 per 100 person-years in 2009 to 0.66 per 100 person-years in 2016, a 42 percent decrease. Person-years are the sum of the number of years that each cohort member participated in the study. The researchers calculated the annual number of new HIV infections using data from nearly 18,000 of the almost 34,000 total participants.

In addition, the proportion of cohort members living with HIV whose treatment suppressed the virus increased from 42 percent in 2009 to 75 percent in 2016, showing the feasibility of meeting the goal of the UNAIDS 90-90-90 initiative to achieve 73 percent viral suppression.

“These findings are extremely encouraging and suggest that with sustained commitment to increase the number of people who use combination HIV prevention, it may be possible to achieve epidemic control and eventual elimination of HIV,” said David Serwadda, M.B.Ch.B., M.Med., M.P.H., co-founder of the Rakai Health Science Program and Professor at Makerere University School of Public Health in Kampala, Uganda.

HIV incidence dropped the most–by 57 percent–among circumcised men, likely because both their own circumcision and ART taken by their female sexual partners living with HIV protected these men from the virus. HIV incidence declined by 54 percent among all men but by only 32 percent among all women. According to the investigators, this difference probably occurred because a greater percentage of women living with HIV than men living with HIV took ART, and because nearly two-thirds of men chose the extra preventive benefit of circumcision. The researchers suggest addressing this gender imbalance by influencing more men living with HIV to take ART and by giving HIV-uninfected women HIV prevention tools that they can control unilaterally, such as pre-exposure prophylaxis (PrEP). The scientists anticipate that the RCCS will add PrEP to its combination HIV prevention package as the study continues.

“We expect that this multifaceted approach to HIV prevention will work as well in other populations as it has in rural Uganda,” said Dr. Grabowski. “Our results make a strong case for further expanding ART and male circumcision for HIV prevention in Rakai District and beyond. Additional proven HIV prevention interventions, such as PrEP, should be added to the mix to reduce HIV infections in women and other high-risk groups.”