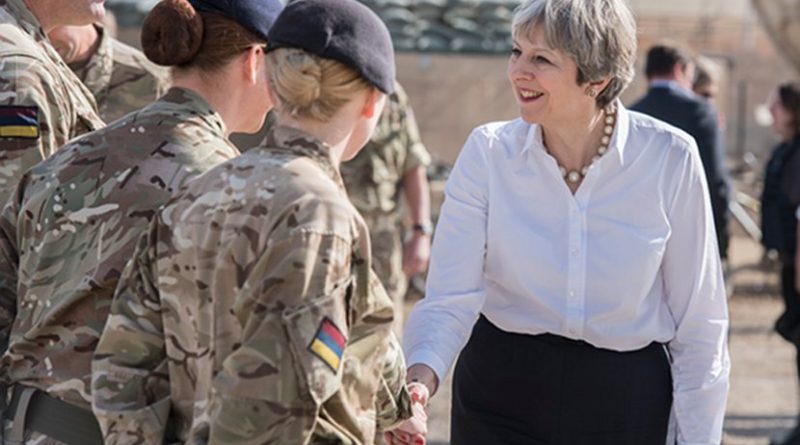 Prime Minister Theresa May became the first major foreign leader to visit Iraq since the fall of Mosul, announcing the UK’s commitment to addressing the evolving threat from Islamic State (Daesh) and countering the dispersal of foreign fighters as Daesh is squeezed out of the battlefield in Syria and Iraq.

Speaking to British troops in Iraq, the Prime Minister said that the UK’s military success against Daesh means they are increasingly losing control of their territory and resources, but in response to military success, Daesh has become more diffuse, organic and networked.

“First, we will deepen our counter-terrorism relationship with Iraq. The UK will invest £10m over the next three years to build Iraq’s counter-terrorism capability to meet the new threat. This means more personnel working with Government of Iraq counter-terrorism agencies. And it means deploying law enforcement resources to develop effective judicial pathways. This will allow us to spot and respond to terrorist threats against Iraq and ourselves, in partnership with Iraqi security forces,” May said.

May said the UK will work with partners across the region to develop border infrastructure, watch-lists and biometric capabilities, to counter foreign fighter dispersal. “This will help ensure foreign fighters are identified, stopped, and disrupted before they can harm people, and so we can manage the return of women and children.”

Third, the UK will do more to tackle terrorist abuse of the internet. The Prime Minister has advocated, most recently at the UN General Assembly with President Macron, Prime Minister Gentiloni and 70 other countries, for the major communications companies to live up to their responsibility, and remove content within one to two hours of release. The companies have begun to act: they have set up the industry led Global Internet Forum to Counter Terrorism but they need to go further and faster in identifying and removing content and ultimately preventing it from going up in the first place.

May has also announced that the UK will continue to support Iraqi defence and security through the provision of officer training, including places for Iraqi students on high profile UK courses at the Military Colleges and the Defence Academy, and UK training teams continuing to develop Iraqi trainers, supporting them in the delivery of courses on topics such as Counter-Improvised Explosive Devices, combat medicine, military planning, logistics, and force protection.

May visited British, Coalition and Iraqi troops at Taji and congratulated them on the success of the counter Daesh campaign. Around 80 British troops are based at Taji, and the Prime Minister had the opportunity to see them alongside their Coalition counterparts, training the Iraqi security forces.