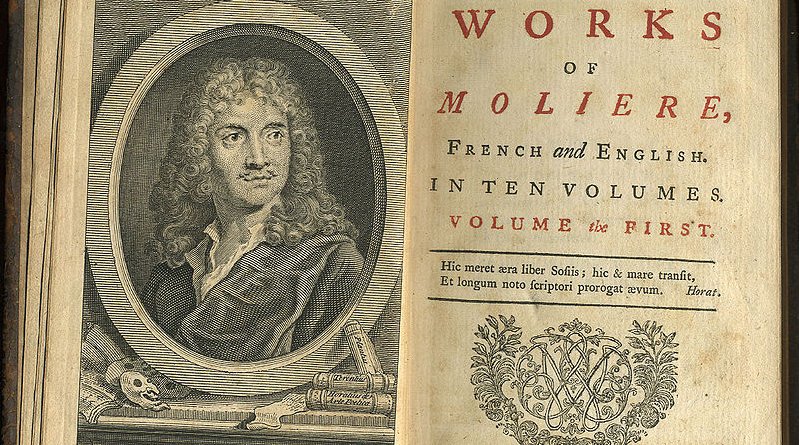 First volume of a 1739 translation into English of all of Molière's plays, printed by John Watts. Credit: Private Collection of S. Whitehead, Wikimedia Commons

Two French researchers from the CNRS and Ecole nationale des chartes disprove the theory according to which Corneille was Molière’s ghostwriter – a popular and century-old theory, defended by some academics and writers.

According to their forthcoming study in Science Advances, Molière would most likely be the only author of his numerous masterpieces.

Was Pierre Corneille Molière’s ghostwriter? The idea dates back to 1919, when French poet and writer Pierre Louÿs wrote a now famous article, attributing Amphitryon and a few other plays signed by Molière to Corneille.

This suspicion grew further, to encompass all of Molière’s plays: how would it be possible that a poorly educated actor, managing his own theatre company, and valet of the king’s chamber, could have written so many masterpieces? Molière would only have been the main protagonist of the plays. Their actual author, Pierre Corneille, would have benefited from his fame and talent, without exposing himself to controversies nor tarnishing his reputation as a serious author.

Florian Cafiero and Jean-Baptiste Camps, two researchers in computational linguistics from the CNRS and the École nationale des chartes, used “authorship attribution” techniques to disprove this theory. They rely on an extensive statistical analysis of writing habits and speech mannerism to identify the author of a text. Each individual writes using a specific proportion of words, expressions, or grammatical sequences. Even when someone tries to consciously imitate another style, some elements betray him, like function words ( “from”, “then”, “of”…), that we use without even thinking.

The reliability of these techniques is remarkable. They are used by historians to identify the author of a medieval text, or by an intelligence agency to understand who wrote an anonymous threat.

Using these methods, the authors of this study read and analysed these texts for three years, comparing among other thing the rhymes, grammar, vocabulary, or function words present in texts by Molière, Pierre Corneille, Scarron, Rotrou or Thomas Corneille.

In this study of an unprecedented scale, it appeared that from any point of view, the characteristics found in Molière’s text were without a doubt significantly different from any other author of the time. Pierre Corneille’s plays are very often the most different, Scarron’s or Thomas Corneille’s works being always closer to Molière’s. It is thus very likely that Molière’s masterpieces would not have been written by Corneille, nor by another author… but more simply, by himself.

Home » Molière Most Likely Did Write His Own Plays