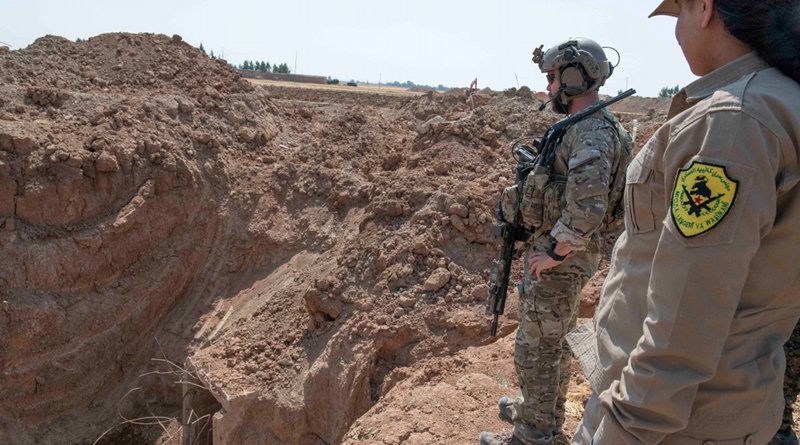 A member of the U.S.-led coalition and a member of a local security force observe the destruction of a former fortification in northern Syria. Photo Credit: Army Staff Sgt. Andrew Goedl

U.S. forces are reset and repostured in Eastern Syria and have restarted operations with the Syrian Democratic Forces aimed at defeating ISIS, Army Lt. Gen. Robert White, the commander of Combined Joint Operation Inherent Resolve, said this week in Baghdad.

At an impromptu news conference outside his headquarters, the general said everything is going well.

U.S. forces withdrew from an area 10 kilometers deep on the Syrian-Turkish border. Turkey launched an incursion into the area in early October.

U.S. service members remain in Eastern Syria to ensure that ISIS doesn’t re-emerge and get money from oil fields in that part of Syria.

White said the command will reduce the number of U.S. forces in the area to around 600. “We are in the process of removing some of the soldiers and service members that were there, [and that will] probably take about another week, based on the austere environment that’s there,” he said. “Most of them will return either to [the continental United States] or down into Kuwait.”

The U.S. and coalition effort is focused on the mission to defeat ISIS, said senior Operation Inherent Resolve officials. The coalition effort is aimed at helping Iraqi and Syrian forces take on the terror group. The physical caliphate that ISIS established has been destroyed, and the mission now is to prevent it from reconstituting itself.

“What we’re seeing from [ISIS] at the moment is a relatively low-level of attacks being conducted against the Iraqi government security forces, etc., in certain … more marginal parts of the country,” the official said. “We’re not seeing a huge groundswell of support for them amongst the population. Nor are we seeing them being able to gather the momentum that they particularly would like to.”

Nor has the group been able to capitalize on the death of their leader Baghdadi, the confused situation in northeast Syria or the protests in Iraq, defense officials have said. Officials believe that the terror group wanted to take advantage of these opportunities, but can’t.

Officials said there are roughly 11,000 ISIS fighters in Syria and Iraq, but they are ineffectual. They are finding it difficult to move people and materiel around. They have been forced into marginal areas and cut off from sources of funding and recruiting.

Every time these small cells of terrorists try and pull together a larger group to launch attacks, “they’re either rumbled by somebody, or they don’t have enough material,” the official said.

The group is not entirely toothless and has launched some small-scale attacks. Officials have said the danger comes if the group is allowed to recover, so continuing pressure on ISIS is required to finally eliminate the group.

In Iraq, OIR officials are focusing on the capabilities security forces — defense and police — need to deal with the ISIS threat. “It is a very different threat from the one that they defeated in the liberation of the northern areas and the west …  a couple of years ago, and they have to approach it differently,” the official said. “It’s almost back to a more standard Iraqi security approach — controlling movement around population areas, policing, the occasional operations to attack these pockets of [ISIS] wherever they are found. In broad terms, I think they’re doing that pretty well.”

There is room for improvement and Iraqi and coalition advisors are working together to improve capabilities like intelligence collection and dissemination, counterinsurgency operations, surveillance systems, the decision-making process and overall command and control.

This is a far cry from what the coalition did in the past. Coalition forces were training and outfitting large numbers of soldiers to take on ISIS in Mosul and its surrounds. The coalition forces does not need to do that now, because the Iraqis can train their own soldiers now. “We can slightly step back providing the advice for that sort of thing and focus on areas that no matter their air force capability, for example,” he said.

The coalition role has changed and will continue to change if conditions continue to improve, and there is a reduced threat from ISIS. “I think you can see and expect to see that trend continuing,” he said. “Because what we don’t want to be doing is having our soldiers here and teaching Iraqi soldiers how to shoot their rifles for forever.”

If the situation continues to improve, “we would expect to see some sort of continued reduction in our presence over time,” the official said. “We want to continue to work with the multilateral institutions who are working here. So NATO has a mission here. The [European Union] has a mission here. They’re all involved in security sector reform. I think what you are likely to see is that clear distinction between our mission — OIR — focusing on that enduring defeat of [ISIS] and the other multilateral organizations doing longer term security sector reform.”