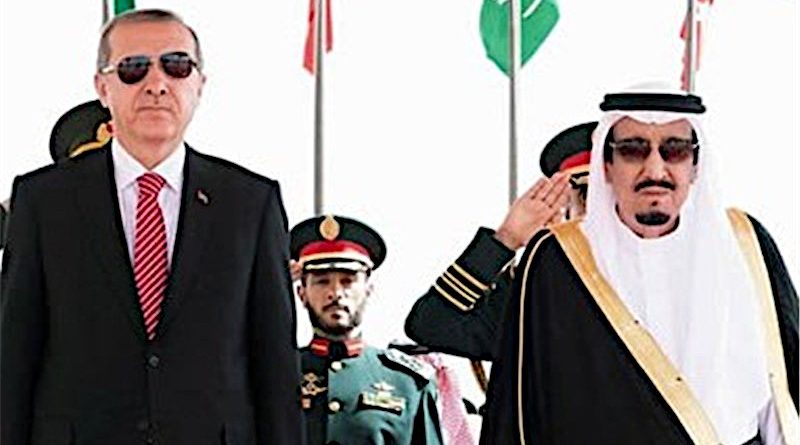 Turkey’s relations with Saudi Arabia appear to be thawing after years of regional rivalry, with both countries’ leaders pledging to improve bilateral ties. Analysts suggest factors that are leading to the improvement in ties could be economic matters as well as an incoming Joe Biden presidency.

The leaders’ conversation has been followed by similar warm statements by the Turkish and Saudi foreign ministers who met in Niger on the sidelines of an Organization of Islamic Cooperation meeting.

“A strong Turkey-Saudi Arabia partnership will be beneficial not just for our countries, but for the whole region,” Turkish foreign minister Mevlut Cavusoglu tweeted.

Erdogan and Saudi Crown prince Mohammed Bin Salman have been bitter rivals in the past, frequently exchanging angry barbs while pursuing regional dominance.

“Saudi Arabia and MBS [Mohammed Bin Salman] in particular, he tries to be the leader of the Arab world.” said professor of international relations Huseyin Bagci of Ankara’s Middle East Technical University.

“Saudi Arabia is a close ally to the U.S., and Donald Trump gave them a free hand without conditions. Turkey was also trying to be the leader of the Arabs and the Islamic world, which was opposed by Saudi Arabia,” Bagci said.

Observers blame the bilateral rivalry for worsening conflicts across the Middle East and North Africa. But Biden’s apparent election victory over Trump is forcing the Turks and Saudis to reassess.

“One of the impetus [for Saudi Turkish rapprochement] is the arrival of Joe Biden,” said former Turkish Ambassador to Qatar, Mithat Rende, now a regional energy analyst. “The Saudis should be prepared [for] a different treatment by the Biden administration, so the Saudis and also the Turks, they came to understand this worsening of relations, this crisis in bilateral relations is not sustainable.”

Analysts also cite economic factors in the push for Turkey’s rapprochement with Riyadh. “Turkey has economically terrible conditions at the moment, and Saudi Arabia has always been a life-breath for Turkey,” said Bagci.

“In the past, they invest and bring money into the country, so probably this also try by Turkey to renew the relations, and to make some concessions,” he added.

Riyadh is reported to have imposed an unofficial trade embargo on Turkish goods. The Turkish Exporters Assembly said exports to Saudi Arabia fell 16%  until October this year to $2.23 billion.

But Ankara appears optimistic of a breakthrough.

“We expect concrete steps to solve problems in our trade and economic relations,” Turkey’s Sabah newspaper quoted trade Minister Ruhsar Pekcan as saying. “Our counterparts told us there was no formal decision that there were some exceptional issues.”

In a possible gesture to Riyadh, analysts suggest Ankara is toning down its rhetoric over the murder of Saudi journalist Jamal Khashoggi.

Khashoggi’s murder inside Saudi Arabia’s Istanbul consulate in 2018 saw Erdogan take a leading role in international condemnation of Riyadh for the slaying, which was widely blamed on prominent members of the Saudi regime.

An Istanbul court is currently trying Saudi officials in absentia for Khashoggi’s killing.

Ankara had been drawing publicity to the case, until now.

Last week’s hearing drew no comment by Erdogan or any of his senior party officials, and the case is adjourned until March.

“Turkey has stopped making this an international issue,” said Emre Caliskan of Britain’s University of Oxford. “It seems Erdogan has lowered his tone over Khashoggi case; this would also be an indication Erdogan wants to have a better relationship with Riyadh.”

However, Ankara’s support of the Muslim Brotherhood remains a major stumbling block to any reset in Turkish-Saudi ties.

“Turkey has supported the Arab Spring and the Saudis they were not happy about it. The support of the Ikhwan [Muslim Brotherhood] movement, in particular, it was considered by Saudi Arabia, Egypt and other Gulf kingdoms as a threat to their rulers and systems,” said Rende.

“I don’t think Erdogan will break its position with Muslim brotherhood at least in near future because this support has a direct impact on Turkey’s policy in Libya, Syria, and Qatar,” said Caliskan.

History and pragmatism will be critical to any rapprochement, predicts  Caliskan.

“We should not forget that these two countries had a very good relationship before the Arab spring. Turkey and Saudi Arabia must learn to work together with their different agendas and baggages. But when it comes to pragmatism Erdogan is the champion of pragmatism; I am confident Erdogan would establish a dialogue with the Saudi leadership and vice versa would be true,” Caliskan said.