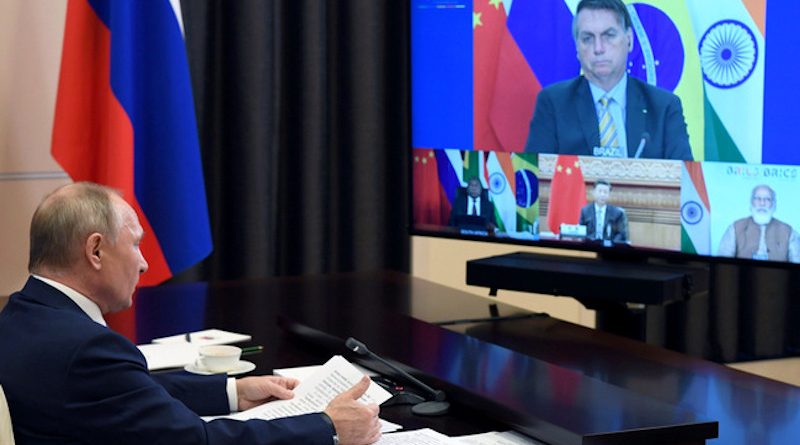 Opening the XII BRICS Summit, Vladimir Putin stressed that, despite the special conditions during the Russian presidency associated with the coronavirus pandemic, cooperation between the BRICS states was actively developing in all key areas – in politics, economics, and humanitarian sphere.

“We have held 130 events, including some 25 ministerial meetings. Unfortunately, but naturally in this situation, many of them had to take place online. Of course, our current priority is to coordinate collective BRICS measures to combat the pandemic, improve collaboration between our epidemiological services and protect the lives and health of our citizens,” he said, adding that the subject of medical cooperation is nothing new for BRICS.

“Let me remind you that the Ufa Declaration we adopted five years ago included an agreement to work together to prevent the spread of infectious diseases, including – I would like to emphasise this – novel coronaviruses. Pursuant to that agreement, the BRICS countries created an early warning system for infectious disease outbreaks, which we could use during the COVID-19 pandemic. The BRICS countries promptly responded to the disease outbreak and took practical measures to combat the pandemic. I would like to point out that the Russian Direct Investment Fund (RDIF) has signed agreements with our Indian and Brazilian partners on clinical tests of the Sputnik V vaccine and with pharmaceutical companies in China and India on the production of this vaccine not only for our own use, but also for third countries,” Vladimir Putin reminded, focusing on the fact that a second coronavirus vaccine in Russia, EpiVacCorona, had already been registered, third one was in the works, and Russia is ready to cooperate with our BRICS partners in their manufacturing and use.

According to him, the New Development Bank (NDB) is in great demand in the current situation.

“The Bank has reserved $10 billion to combat the pandemic, while its overall portfolio of investment projects now exceeds $20 billion. As many as 62 large projects are already being implemented in the BRICS countries. Incidentally, a regional branch of the bank will soon open in Moscow to implement lending programmes across the Eurasian space. I would also like to remind you that the BRICS countries have a special insurance tool in case of a crisis in the financial markets: the BRICS Contingent Reserve Arrangement, with a $100 billion fund. The BRICS Interbank Cooperation Mechanism is important in the parties’ cooperation on credit and investment policy; this year, they have agreed on the rules and principles of responsible financing of development institutions within its framework,” Russian leader said.

He also noted that the five countries are enhancing cooperation in science, technology, and innovation, intensive contacts have been underway between our academic and scientific centres, the parties continue exchanges on the cultural and humanitarian tracks, and the dialogue between the authorities responsible for tourism has been launched.

Speaking about the situation in the field of global and regional security, Vladimir Putin stressed that it remains difficult: international terrorism and drug trafficking continue to pose serious threats, and cybercrime has greatly expanded its reach.

“We are witnessing dangerous destabilising trends in the Middle East and North Africa. The armed conflicts in Libya and Yemen are continuing. There is still a lot to be done to bring about a political settlement in Syria, and the risks of escalation persist in Iraq, Lebanon, Afghanistan, and in the Persian Gulf. Furthermore, as you know, the Nagorno-Karabakh conflict entered an acute phase in September. Russia went to great lengths to help stop the hostilities between our two friendly states and incite them to come to a compromise. Our mediation efforts paved the way to the November 9 agreement on a complete ceasefire and the deployment of a Russian peacekeeping force in Nagorno-Karabakh. All these provisions are set forth in the trilateral statement signed by the presidents of Russia and Azerbaijan, and the Prime Minister of Armenia,” Vladimir Putin said.

In addition, in his speech, he drew attention to the fact that the BRICS states have been closely coordinating their efforts on current international and regional matters, are expanding their cooperation on combating drug trafficking and corruption, as well as on international information security, and consistently advocate constructive relations with other states, integration entities and international organisations.

“Colleagues, in closing I would like to stress once again: Russia will always give priority attention to expanding cooperation between the BRICS states and strengthening our association’s positions in the international arena,” Vladimir Putin said.

“This joint declaration mainly emphasizes the advancement of ‘strategic partnership’ among the BRICS countries in the three main pillars: policy and security, economy and finance, culture and people-to-people exchanges. To achieve the first pillar, the BRICS countries are committed to enhancing their security cooperation and supporting an equitable, inclusive and representative multipolar world system. This declaration also focuses more on the ongoing security issues in the US-engaged countries including Syria, Iraq, Afghanistan and Libya. The BRICS countries also expressed their concerns about the Israeli-Palestinian conflict and the rising tension in the Korean Peninsula,” the expert said.

He also drew attention to the fact that the BRICS member states are also committed to multilateral institutions, such as UN, World Bank, IMF, WTO, WHO and G20 to promote the global public health and tackle the global economic recession posted by the COVID-19 pandemic.

“In this connection, the BRICS New Development Bank provides loans to combat against the COVID-19 epidemic and its adverse socio-economic impact. The BRICS countries also extend the ‘Strategy for BRICS Economic Partnership’ to accelerate the BRICS economic cooperation in such areas as trade, investment, finance, digital economy and sustainable development in the fourth industrial revolution,” Lak Chansok explained.

He noted that the BRICS expressed their political commitment to the implementation of the Paris Agreement on global climate change and to further promotion of the people-to-people ties for mutual understanding, friendship and cooperation.

“The BRICS remains relevant and becomes more significant for all member countries at the time of the COVID-19 pandemic. First, this organization is one of the important multilateral organizations to promote economic cooperation and stimulate growth in the face of the global economic turndown resulting from the COVID-19 pandemic. Second, it remains a vital alternative for the member states to identity issues of common political-security interests and address these issues. Thus, the 2020 BRICS Summit could contribute to confidence building among the five countries, especially between China and India as a consequence of their long-standing territorial disputes,” the analyst said.

“The BRICS countries’ continued support of multipolar system and multilateral institutions to tackle the COVID-19 and its negative impact on socio-economic wellbeing of the vulnerable countries can leverage the importance of this organization to promote and enhance the global governance. In the post-COVID-19 era, despite their anticipated political-security divergence, the BRICS countries still find the organization increasingly important to promote robust economic growth especially in the areas of infrastructure finance through the BRICS New Development Bank and e-commerce,” Lak Chansok added.

Leonardo Ramos, Department of International Relations, the Pontifical Catholic University (PUC) Minas in Brazil, shared the opinion about the success of the summit.

“In a global context of pandemic, the maintenance of the BRICS summit – distinct from the 2020 G7 summit, for example, is something very important. More than that, the fact that the summit brought some innovative discussions over their economic cooperation for the next years is something very interesting, and attention must be given to it in the next years,” he stressed.

From his point of view, NDB agenda and COVID-19 were important elements of the summit.

“NDB increasing operation, opening regional offices in the last years and intending to be an important development bank to emerging countries calls attention to possible ways that the BRICS outreach process could take in the next years. The bank can be also an important mechanism to BRICS action over financing COVID-19 treatments, vaccine production and acquisition,” Leonardo Ramos said.

At the same time, despite the above-mentioned advances, it is important to notice some problems regarding the relations of the BRICS members, he said.

“Particularly, these are the relations between India and China, whose current tensions could impact on the BRICS. In this process, Russia can be a key mediator, for the good sake of countries cooperation; second, Brazil-China. Brazilian president has repeated an anti-China position, closing relations with Trump since the beginning of his government. With Biden’s victory in US elections, Brazil will have to change something in its foreign policy strategies, and maybe it could be good to its relation with BRICS countries,” Leonardo Ramos suggested.

“One of the outcomes of the 2020 BRICS Summit […] is the further consolidation of cooperation among the member countries in the midst of the COVID-19 pandemic,” the analyst stressed.

At the same time, he said that the Summit was held under the shadow of the growing conflict on the border between India and China.

“The member countries must not be oblivious to the bilateral dimension while promoting multilateral forums. Both are deeply intertwined. Any further bilateral escalation can sound death knell to BRICS initiative. There can never be a bifurcation and separation of the multilateral from bilateral framework. Both must go hand in hand,” Varaprasad Dolla noted.

“The BRICS leaders recognized the challenges brought by the COVID-19 pandemic and responded with a series of important politically binding, future-oriented commitments. In their final declaration, the BRICS made a total of 45 such commitments. Of these commitments, 10 were under the theme of international cooperation, demonstrating the cooperative spirit between BRICS members. The second most important area of decision making was regional security, with a total of 7 commitments,” the analyst said.

“The third most important issue area of decision-making, understandably, was health, where four critical commitments were made. Specifically, the BRICS committed to work together towards the fair, equitable and affordable dissemination of the COVID-19 vaccine, to support the Access to COVID-19 Tools Accelerator, to explore ways to facilitate the movement of people in a way that does not impede efforts to protect public health, and more broadly, to enhance BRICS cooperation in developing joint responses to the spread of major diseases and infections with a pandemic potential,” Alissa Wang said.

Additionally, in her opinion, another important initiative of the BRICS countries was the commitment that addressed the readiness to develop further cooperation with Africa with the aim of strengthening the response to the health, economic and social effects of COVID-19.

“As such, the BRICS demonstrated, through their summit commitments, their will to respond cooperatively to the pandemic in a multidimensional and comprehensive way, with particular attention to developing countries and the equitable distribution of global vaccines, and has thus set a solid foundation for productive action,” the expert concluded.