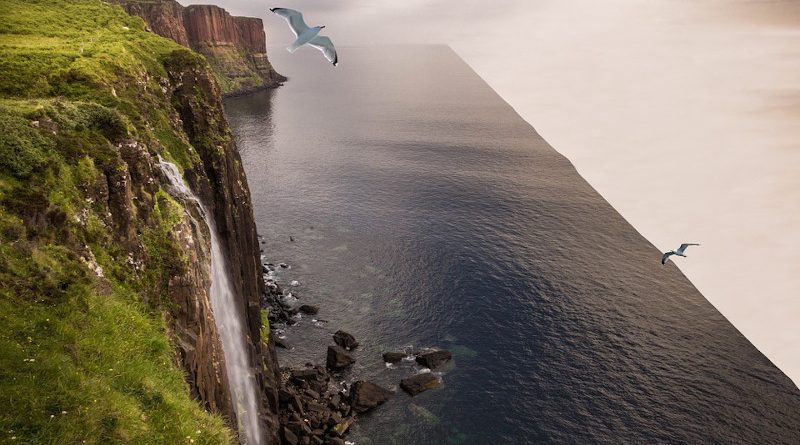 Over the past hundred years, evolutionary socialism has slowly but steadily taken root in the fabric of American society. This is especially noticeable in the economic sphere, because evolutionary socialism uses the mandatory redistribution of wealth as one of the methods to achieve its ultimate goal. The bloated state machine interferes with the economy, distorts market signals and economic relations between market agents, and chooses winners and losers in order to achieve an illusory and propagandistic goal of equality and justice.

However, one should not forget that evolutionary socialism simultaneously uses the collectivization of consciousness and the redistribution of wealth. Moreover, an analysis of the existing flavors of socialist movements, especially those that have been able to materialize in practice, shows that the subjugation of individualism by collective thinking is an even more effective path to building a socialist society than the redistribution of wealth. Totalitarianism is the end result of the collectivization of consciousness, characterized by the complete suppression of free will and thoughts, the subordination of everything and everyone to the volition of the state apparatus, and the rule of one ideology under the leadership of one party. Politics, culture, art, morality, ethics, and aesthetics have to be unquestioningly obeyed across the ideological line, and dissent is severely punished.

One of the consequences of the collectivization of consciousness is that science is restructured from an institution of free thought and the generation of ideas into a servant to the ideological dogmas of the ruling regime. Socialism is very concerned with ideological purity and like-mindedness; therefore, science is used as a means of collectivizing consciousness, and is itself subjected to oppression by the coercive state apparatus. The exceptional features of science under socialism are the emergence of openly pseudoscientific trends and the accusation of dissenting thoughts as unscientific and harmful to society. The most striking examples of the transformation of science into an ideologically dependent and suppressed institution were provided by the Communist regimes of the Soviet Union and National Socialist Germany.

From the very beginning, science in the Soviet Union was subjected to ideological control that continued until the collapse of the country. The first victims of the communist regime were representatives of the science of sciences—philosophy. After the Bolshevik coup, Marxism-Leninism was proclaimed the only correct and permissible philosophy in the Soviet Union; representatives of other schools of thought were outlawed. The Bolshevik regime expelled philosophers from the country on the notorious “Philosophy Steamer” (there were several voyages), including famous Russian philosophers such as Nikolai Berdyaev, Ivan Ilyin, and Semyon Frank, together with other figures of science and culture. Trotsky explained that “We expelled these people because there was no reason to shoot them, but it was impossible to tolerate them.” Suppression continued until the 1930s, and, as a result, Soviet philosophy never became a science; it was nothing more than dogma.

While the logic of repression against non-Marxist philosophy in the Soviet Union can be understood, the persecution of biology and genetics seems rather unusual at first glance. However, we should not forget that the collectivization of consciousness does not imply the coexistence of alternative views and the struggle of ideas. The winner in a scientific debate is the ideologically “correct” or regime advantageous theory. So, a very mediocre agronomist with a “correct” worker-peasant pedigree, Trofim Lysenko, was able to destroy biology and genetics in the Soviet Union. With Stalin’s blessing, Lysenko designated genetics as a bourgeois pseudoscience based on idealism instead of Marxist materialism. Lysenko’s followers received political and administrative power; as a result, the supporters of classical genetics were severely repressed. Geneticist Nikolai Vavilov was arrested on suspicion of anti-Soviet activities and died in prison in 1943. Other scientists also ended up in labor camps, and some were shot. In the face of persecution, many changed their field of activity or joined the campaign against science. Biologists were forced publicly and in written form to renounce their scientific views while acknowledging the correctness of Lysenko’s pseudoscientific ideas. Classical genetics was banned in the Soviet Union until the 1960s and was rehabilitated entirely after Khrushchev’s displacement. To this day, the term Lysenkoism denotes any administrative persecution of scientists for their “politically incorrect” scientific views.

In the Soviet Union, attempts also began to divide physics into ideologically correct and bourgeois views. Einstein’s theory of general and special relativity, as well as Copenhagen’s interpretation of quantum mechanics, were found to be inconsistent with the principles of dialectical materialism. This was a strong accusation that could close these branches of science. Nevertheless, when Beria, who oversaw the creation of the atomic bomb, found out that the bomb could be forgotten in the event of persecution in these areas of physics, he, possessing enormous political power, did not allow the persecution campaign to develop and thereby saved physics in the Soviet Union. Along with philosophy, genetics, and physics, many other science branches underwent revisions for compliance with the teachings of Marxism-Leninism. It was normal for unscrupulous careerist scientists with connections in the Communist Party to accuse contended ideas as idealistic and bourgeois, as competitors were subjected to various kinds of repressions and persecutions. Such tendencies were observed in cybernetics (which was declared bourgeois pseudoscience), chemistry, literary criticism, and pedagogy.

German National Socialism followed a similar trend but had a subtle difference: science was split not into materialistic and idealistic science, but rather between Aryan and non-Aryan science. The adherents of Aryan science sought to purge German science of Semitic influence long before the Nazis came to power. In particular, some German physicists did not accept Einstein’s theory, not because they had a valid alternative description of physical reality, but because the bearer of the thesis was a Jew and, therefore, a “Jewish science” representative. Philip Lenard, the 1905 winner of the Nobel Prize in physics, believed that science is determined by race and blood. He and other proponents of Aryan physics argued that Einstein’s theory of relativity steers physics away from the genuine German approach. Aryan physics is supposed to retrieve objective laws from nature by observation and intuition, not mental experiments and mathematical formalism, which in essence constitute “Jewish science.” Nazi academics, including world-renowned scientists, accused Jewish scientists of changing the philosophy of science. Therefore, Einstein’s theory was not only erroneous in itself but was based on the wrong research methodology and presupposed a game with mathematical symbols, not a description of reality. It is not difficult to see parallels in Soviet and Nazi scientists’ criticisms of Einstein’s theory; both condemned it on the pretext that Einstein’s view did not correspond to the materialist understanding of the world.

What about science in the United States, mainly promoted by left-leaning academia? If one looks closely, it’s evident that evolutionary socialism has penetrated deeply into the educational and scientific fields. Only the lazy would not write about the American academy’s predominantly leftist orientation and the fact that the education system has turned into a machine of compulsory indoctrination in leftist ideas. However, I want to draw attention to another aspect of American science that clearly points to its socialization. As with the previously described totalitarian socialist regimes, American science has begun to be divided into what is ideologically correct and what requires public censure. For example, modern leftist political doctrine holds global warming to be one of the main threats to the existence of human civilization. Climatology and ecology have turned from objective sciences into undersigners of party science. Instead of scientific debate, doomsday advocates hysterically accuse political opponents of denying scientific facts and general ignorance.

These dogmatic beliefs were refuted not only from a theoretical point of view but also after the gloomy predictions did not come true: the ocean did not flood the cities, and polar bears did not die out. But the emerging facts of manipulation in temperature measurements, data processing, and data interpretation have only led to a change in the Left’s terminology. Instead of global warming, now we are dealing with climate change due to human activity. Scholars who question harmful carbon dioxide’s effect on the climate get ridiculed and silenced. Luckily, the Left still falls short of prosecuting dissident scientists. Nevertheless, leftists clearly understand that peddling climate change and recruiting more believers will bring them long-lasting political success. The Green New Deal, which is presented as a means to save humanity from the consequences of climate change and is based on the false premises of socialist climatology, is as stupid as the fight against sparrows in China during the Cultural Revolution. It is a political declaration of the pseudoscience and an attempt to implement its provisions on par with Lysenko’s Michurin method.

One of the corollaries of the collectivization of consciousness in relation to science is the persecution of its separate branches and of scientists who do not fit into the dominant ideological paradigm. The arbitrary division of science and industries into politically correct ones and undesirable ones is the unmistakable trademark of society’s socialist transformation. As in all leftist regimes, including evolutionary socialism, the trend is apparent: the subordination of the individual to the collective is accompanied by the depletion of the intellectual potential of society and leads to decadence in science, education, culture, and morality.

*About the author: Allen Gindler is a scholar from the former U.S.S.R., specializing in Political Economy, Econometrics, and Industrial Engineering. He taught Economic Cybernetics, Standard Data Systems, and Computer-Aided Work Design in the Khmelnytskyi National University, Ukraine. He is currently a private consultant to IT industry on Database Administration and Cryptography. As a hobby, he is interested in political philosophy, history, population genetics, and Biblical archaeology. He has published articles and opinion pieces in Mises Wire, American Thinker, Foundation for Economic Education, and Biblical Archaeology Review.

Source: This article was also published by the MISES Institute

Allen Gindler is a scholar from the former U.S.S.R., specializing in Political Economy, Econometrics, and Industrial Engineering. Gindler is a supporter of the market economy and especially its interpretation by the Austrian School of Economics. He taught Economic Cybernetics, Standard Data Systems, and Computer-Aided Work Design at the Khmelnytskyi National University, Ukraine. Gindler is currently a private consultant to the IT industry on Database Administration and Cryptography. As a hobby, he is interested in political philosophy, history, population genetics, and Biblical archaeology and has published articles and opinion pieces in Mises Wire, American Thinker, Foundation for Economic Education, and Biblical Archaeology Review.