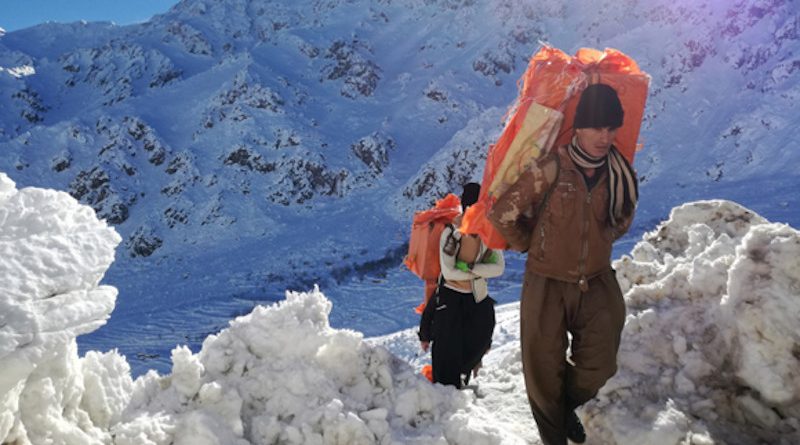 Koolbars mostly work in western provinces of Iran between Iraqi Kurdistan and Iran.

Koolbar is a term used by local people in the Kurdish region that refers to those who carry goods such as refrigerators, air conditioners, heaters, tires, or cigarettes on their back through mountainous corridors passing across borders from neighboring countries to border towns and villages to earn a living.

Koolbars mostly work in western provinces of Iran between Iraqi Kurdistan and Iran. They are mostly men, however women and teenagers, due to unemployment and poverty, are forced to transport various foreign goods from one country to another for low wages, and even people with university degrees make a living out of this job. Many of them are shot by Iranian Revolutionary Guards (IRGC) while crossing the border without warning, or they are killed by falling from a mountain or as a consequence of severe cold weather conditions. The average monthly income of a Koolbar is reported to be only $100.

Our correspondent in Kurdistan has received reports about the death toll of koolbars: “During the first six months of 2020, a total of 144 Koolbar workers were killed or wounded in Iranian Kurdistan, 114 of them due to direct fire by IRGC border guards, 2 workers died from brutal beatings by border guards, 4 due to falling from the mountain, 2 had fallen into the river, 1 run into a landmine that exploded, and 21 lost their lives from various accidents.”

Our correspondent in Kurdistan had an interview with one of these Koolbars named Hiwa, this is how Hiwa describes his life:

“I am from Piranshahr (Northern Kurdistan). Unemployment and life’s hardship have overshadowed our family since I was a child, and I inherited my father’s suffering and poverty. However, my mother tried and worked very hard so that I could study and get a university degree. I was able to get a bachelor’s degree in mechanical engineering, and now my friend, who has a doctorate in petroleum engineering, and myself are working together as Koolbar.”

We asked him to describe the risks involved during his work. He spoke in a simple and clear manner:

“When I want to take a load across the border, I experience all kinds of fears and worries, such as: stepping on a landmine, getting shot by IRGC border guards’ machineguns, and for losing a limb. I also feel a moment of despair and think about my father’s cancer and the deadly cold of the mountains, …”

Hiwa states: “When border guards shoot at us if we survive, they will collect money from us for the bullets they shot at us! The owner of the goods also comes forward and demands for compensation of his goods!  My father died and my mother raised me. We are living through a hard life! There is no work here and we must work as a Koolbar.”

“I was a child when my father got cancer and my mother suffered a lot to raise me, hoping that I finish my studies and get somewhere to help her. I remember at night my mother would talk to me instead of chanting lullabies, saying: “The weather is cold, stormy and rainy, my child does not sleep and wait, tonight your father will come back and bring you beautiful woodwork …”. I always dreamed that one day my father would come back but the reality was something else! I studied and worked as hard as I could, but in the end, my share in this world was just to work as a Koolbar. We are the most fragile and powerless layer of society in the world!”

Hiwa continued: “To make ends meet, we must cross rough and high mountains full of snow, and often deal with avalanches. I fell from a mountain once and broke my leg. So far, I have been ambushed three times and I fell off the precipice. I was shot once. Now I have a bullet in my arm that I do not have the money to pay to remove that bullet. I do not sleep at night because of the pain. On the way we encounter a landmine. Many of my comrades were paralyzed and subsequently died.”

“The IRGC border guards attack us and shoot us with machineguns then confiscate our property, and if we have a horse or a donkey, they will kill and burn our animals.  If we survive, they will demand money for the bullets they fired at us, the owner of the goods also comes and demands compensation for his goods! Me going to work is my only decision but my return home at night is on God’s hands!”

“I looked hard for a job other than this, but there was nothing else, only work as a Koolbar.”

“Now I have a bachelor’s degree in mechanics and my friend has a doctorate in petroleum. The rest of my friends have bachelor’s, master’s, and doctoral degrees, and they all work as Koolbar.  In summer, when the weather is better, we hike for 10 hours, and in winter, we hike for 30 hours in snow and storm to our destination. This is our life!”

“Our city is not developed and many of its areas have no gas, no running water, and no electricity. We use candles for lighting!  In a country rich in natural resources and abundant job opportunities, potential for growth, many of deprived men and women in Kurdistan, old and young, work as Koolbar. They move a lot of goods with great difficulty, with an income that only suffices for some food for themselves and their families to survive!”

“While the control of imported goods to Iran, both legally and illegally, and selling with a much greater price to consumers (people) making huge profits for the importer is in the hands of the government, IRGC and their relatives, Koolbars’ blood is still flowing in Kurdistan’s heights.  To work as a Koolbar is not a job, it is the pain and sorrow of winning a piece of bread to survive, and mercenaries of IRGC target the bread and life of Koolbars!”

In the end, I would like to tell you that on November 29th, border forces in NW Iran targeted a Kurd “Kolbar” identified as 22-year-old Ayhan Khodaie. The young father is in critical condition in the hospital.

Also On November 5  security forces opened fire on a group “koolbars” in Chaldoran, northwestern Iran, killing one koolbar. The other koolbars were arrested. Hengaw Organization identified the man who was killed as a 38-year-old father of three, Hassan Dallayi Milan.”

Home » Iran: Life Of A Koolbar