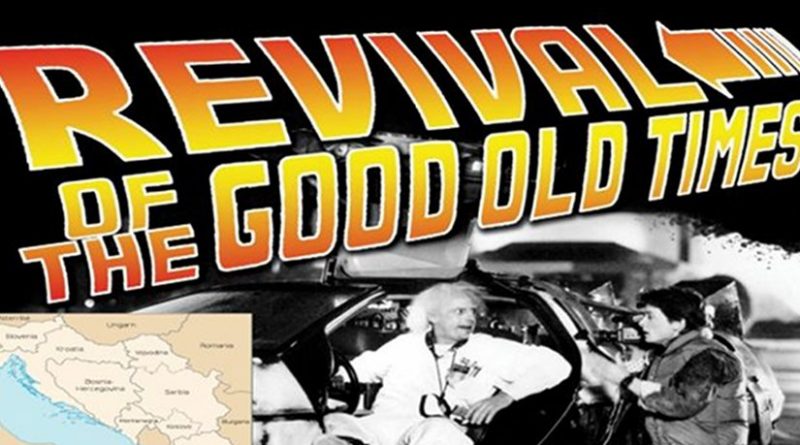 Why do we all around the world say the phase, “Good old times” every time when we are faced with some problem? The answer is not within the superficial “because…it was better,” but in the very clear point of view that, simply, every new period of time is getting worse and worse. Probably our time period will be for somebody, in the future, again, “good old times”.

When we see the year that is passing by us – 2014 within the South_East Europe, I can say that we are living in “the most messed up time of all”, having in mind the protests in Bosnia and Herzegovina, the flooding in Croatia, Serbia and Bosnia and Herzegovina, nearly 1.5 million unemployed within the above-mentioned countries and, above all, politicians who do not know if they have “came back or gone away”.

Neo-liberalism is here to stay, but what to expect from former communists? Can we expect from them to implement capitalism? Did we ever, by all means, have real capitalism within the area of the former Yugoslavia in the last 24 years?

No…No…We had — and we are having — first the accumulation of capital in the late feudalism where, basically, tycoons are threatening employees that they will be replaced with the army of unemployed if they do not obey and accept small and ridiculous salaries. Politicians are here collateral damage, together with the people, but collateral damage who, together with tycoons, are creating an environment where 200 workers from Tuzla in Bosnia and Herzegovina just a couple a days tried to leave the country (because they have lost their jobs) and went to Croatia seeking  bread (and were returned back from the border and received 110 Euros in one time support).

Tried to go to Croatia? In the country where the situation is even worse from where just in 2014 fled 30,000 young people (where 60% of pre-school children are hungry every day) to the European Union countries seeking for a better life. Or, maybe they might have gone to Serbia, in the country where populism of the political leaders cannot feed the army of hungry and unemployed people.

So, what is the solution?

Simple as it is, the solution is to try to do:

1. Lustration (to protect the country from the former communists and its parts).

2. Rule of law to be implemented by independent judicial system established on continental law rules – responsibility to the people, for the people, of the people.

3. Strong and independent prosecutors offices and intelligence services who will conduct impartial research and check out “the first million” of the local tycoons. Prosecute them and get back the money to be invested in the development of the economy of the area.

We did not mentioned word “democracy”. Why? Because, I am underlining, there is no democracy in the area of former Yugoslavia.

Again, how we will implement those above mentioned remarks? No way at all! Why, because the people, the non-educated livestock need a Shepherd to lead them to the canyon of death while they are voting again and again “against”, instead of “for” prosperity of its kind.

Methodology is very cruel – There is no really way out from the Balkan peninsula way of living, except, maybe one: education, education, education. Education will allow us to be able to understand what they are doing to us. “They” are Serbs, Croats and Bosniaks (Muslim) who became the biggest believers ever – while, just a couple a decades ago they were the biggest atheists. Good old times – indeed, above all, Happy New 1815. Year, my dear co-citizens of former Yugoslavia.

Home » South-East Europe On Edge Of Civilization – Depending Who You Ask: Good Old Times – Essay