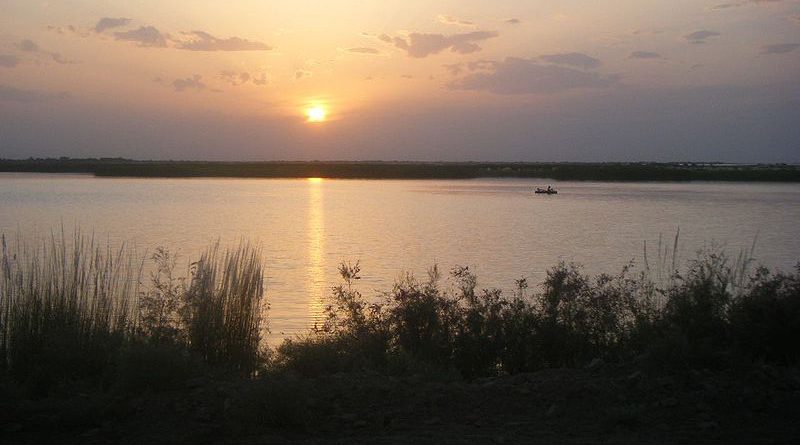 The floods of the Amu River annually destroy several homes and large areas of farmland along its riparian especially in Afghanistan, causing many complaints from locals. The Afghan provincial authorities often took emergency and short-term measures to control causalities and damages. Even during the gabion retaining walls program in Afghanistan (2018), few walls were built in some points of the Amu River banks. However, these efforts have not resulted and collapsed over time, contributing to increased destructions.

Now the questions are, why these emergency measures not persist, destroy back quickly, and, overall, how much investment is required for a stable strengthening of the whole riverbank? That’s why the prevention of the Amu river destructions has become a puzzle for the Afghan government.

In 2016, President Ashraf Ghani promised to set up a special unit within the Ministry of Energy and Water of Afghanistan, for strengthening the Amu river banks. But so far, this promise has not been fulfilled. In 2018, Afghan water sector officials met with Uzbek authorities in Termiz Uzbekistan to discuss the strengthening of the Amu river banks. The outcome of this meeting have not been made public.

Later in February 2019, the ministry of energy and water of Afghanistan was changed to the National Water Affairs Regulation Authority (NWARA). Recently, based on a preliminary assessment of the Afghan NWARA; a proposal of building kilometers long retaining walls along the Amu River was submitted to the Presidential Palace of Afghanistan, which will be implemented by the National Development Corporation (NDC) of the country. This proposal was refused due to lack of coordination with the Central Asian stakeholders and the concerns that the walls would be broken down as previous emergency measures.

Which places are most vulnerable?

The upper portion of the Amu river known as Panj River, forms the international border between Afghanistan and Tajikistan. Due to its steep slope and rocky base, the river flows downward rapidly and the lateral damages are minimal. Only the Afghanistan Takhar province’s Dargad district, located in the middle of the river, is most vulnerable. In this site, Tajikistan has built protection walls on its side, which have changed the river centerline.

At the end of the Dargad district, the confluence of the Kokcha and Tajikistan’s Kolab rivers with the Panj River raises the water level. In the lower part, the Amu river in the Imam Sahib district of Kunduz province in Afghanistan has a high level of rout alteration and coastal destruction due to flat and dusty lands.

Consequently, due to the confluence of the Kunduz river from Afghanistan and Vakhsh river from Tajikistan, the water level in the Amu river becomes much higher. More casualties have been reported between the Afghanistan and Uzbekistan border each year. With the entry of the Amu River into Uzbekistan, major projects and reservoirs such as the Karkum canal are taking water, which reduces the level of damages. Finally, the Amu river gradually dries and as a result the Ural lake faced environmental issues.

How to sustainably prevent the river destructions?

Flowing through several countries, and forming border between Afghanistan and Central Asia make the Panj and Amu rivers international. In which all involved countries should operate in a coordinated manner. Because, unilateral operations are not sustainable, eco-friendly, and economic. Despite that, it can also change the river direction, which will affect the diplomatic relations between neighboring countries.

A sustainable and eco-friendly solution to bank protection can only be accomplished by a comprehensive study of the Panj and Amu rivers. In which first, the lateral migration of Panj and Amu rivers for the next hundred years in consideration with the planned infrastructure scenarios are predicted using recent engineering simulation techniques. These models precisely determine the location and depth of the most vulnerable sites, as well as the water forces acting on those locations. Later, this information is used to precisely design the protection structures, which minimizes the probability of re-destruction. These analyses prevent wastage of money and repetitive practices. In addition to protection structures, a comprehensive study will also find more nature-based alternatives that are realistic and improve environmental conditions.

This requires the joint work of all the Amu basin states and, individually, none of these states can prevent the river risk. Therefore, it is best to perform this task through a third-party and impartial international organization. As the Amu river bank erosion is a water and environment related problem for several countries, numerous international organizations such as the World Bank, the European Union, Asian development bank and others will offer financial assistance for eliminating this risk and establish regional cooperation in this region. The Amu basin countries only need to reach an agreement, and Afghanistan a most vulnerable country can undertake this initiative.

It is worth mentioning that flood management technical investigation using remote sensing for the Panj river basin with the financial support of Asian development bank was carried out by a Spanish company for Afghanistan and Tajikistan, but reports for the Amu river are not available.

This mechanism of sustainable protection can also pave the way for the Afghanistan and Central Asia transboundary water solution. The European Union, and in particular Germany has an interest in the Amu river basin, as well as supported the Central Asian countries in water and environmental protection projects. Thus, Afghanistan can request Germany for the Amu river bank sustainable solution. Because Germany has both financial and technical capabilities and can use its influence in the countries of the region for the best accomplishment of this task. Moreover, Russia also does not have problem with Germany’s activities in the region.

In this way, Afghanistan can turn the Amu river damages problem into a regional cooperation opportunity, which will be executed in two phases of investigation and implementation. This opportunity with the strong will of Afghanistan can also create jobs for many people.

*Assem Mayar is a water resource management expert and lecturer at Kabul Polytechnic University in Kabul Afghanistan. He tweets via @assemmayar1.