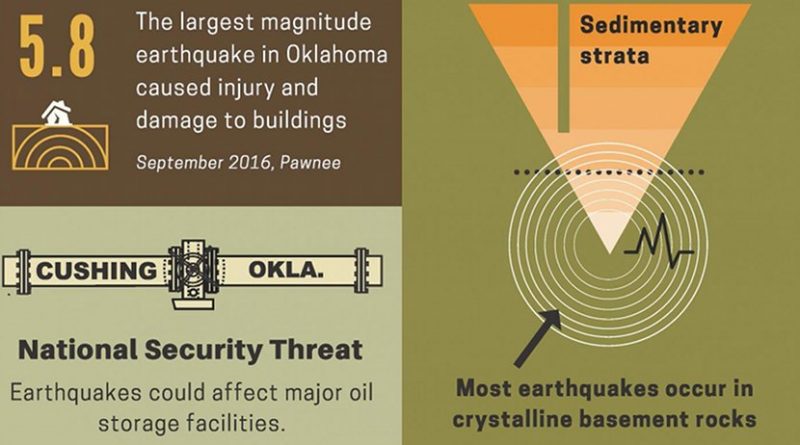 Detail of an infographic showing the causes and consequences of induced seismicity in the U.S. State of Oklahoma. Credit: Dr. Thomas Gernon, University of Southampton.

A new study aiming to provide a better understanding of how injection wells in the U.S. influence earthquake activity cites wastewater injection depth, not purely rate or volume, as a critical factor.

The results suggest that efforts to restrict injection depths to certain distances above the so-called crystalline basement layer could reduce earthquake hazard. Earthquakes can be induced by industrial processes, a fact established decades ago.

Since 2009, when seismicity in the US midcontinent began to surge, earthquakes induced by the underground fluid injection processes associated with oil and gas extraction have become a major focus.

High-rate injection has been cited as a particularly important trigger.

Studies have also suggested that injection depth – namely injections near the crystalline basement – might increase the likelihood of seismicity locally, though the role of injection depth has been challenging to define.

Here, to better parse the effects of different wastewater injection parameters, including depth, Thea Katherine Hincks and colleagues developed an advanced computer model that explores the joint effects of injection volume, depth and location – encompassing effects that are at once operational, spatial and geological in nature.

Simulations with this model using six years of data from 10,000 active class II wells in Oklahoma’s induced seismicity zone reveal that while the joint effects of depth and volume are critical, depth above the basement is more influential.

Simulations that limited depth of injection to 500 meters above the basement reduced seismic energy release by a factor of 2.8, the authors say.

The novel modeling approach could aid in improving forecasts of the impact of proposed regulatory changes on seismicity.