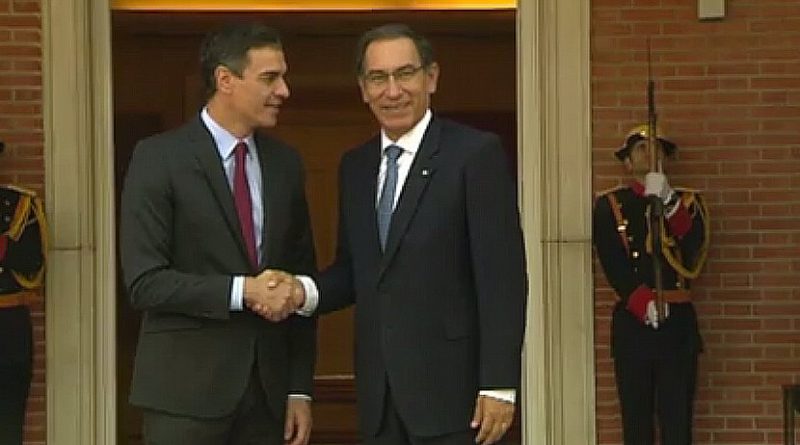 Spain’s Prime Minister Pedro Sánchez received the President of Peru Martín Vizcarra within the framework of the State visit by the Peruvian leader to Spain. This is the first trip by Vizcarra to Europe after taking office in March 2018, coinciding with Peru’s participation as guest country at the ARCO trade fair

​The aim of the State visit was to strengthen the sound strategic association relationship between Spain and Peru, which translates into an intense network of political, economic, social and cultural contacts. Accordingly, during their meeting, Pedro Sánchez and Martín Vizcarra reiterated the importance of bilateral relations between the two countries and their desire to further develop this association, exploring new areas of collaboration.

With this commitment, Sánchez and Vizcarra adopted a Joint Declaration that contains the main pillars of bilateral relations, and signed a series of agreements that include a Convention on the Fight against Crime, an Agreement on the Reciprocal Protection of Classified Information, a new Country Association Framework 2019-2022, a Memorandum of Understanding on Cultural Cooperation, a Technical Agreement of the Prevention of Natural Disasters, a Technical Agreement on Social Security and a Declaration of Intent on a Mobility Programme for Young People.

The fight against corruption – one of the cornerstones of the political action of the two leaders – was at the heart of their meeting, at which they exchanged points of view on how to boost this fight at an international level. Sánchez also conveyed to Vizcarra the interest of Spanish companies in continuing to invest in Peru – Spain is the leading foreign investor – and the importance that Spain grants to the signing of the Double Tax Treaty on promoting investment.

The Spanish Prime Minister also sought to underline the commitment of Spanish Cooperation, as evidenced by the signing of the new Country Association Framework 2019-2022. 2018 is the 30th anniversary of the presence of the Spanish Agency for International Development Cooperation (Spanish acronym: AECID) in Peru. Official development aid over the last five years has exceeded 100 million euros, with a constant flow of 18 million each year, including all Spanish Cooperation stakeholders.

Lastly, the two leaders discussed the Spanish community in Peru and the Peruvian community in Spain, amounting to some 33,000 and 73.000 people, respectively.

Commitment to free elections in Venezuela

The meeting also served to exchange impressions on the crisis in Venezuela. In the joint declaration adopted, the two leaders reiterate “their firm support for Juan Guaidó, and their commitment to work “in a coordinated fashion” to boost the re-establishment of democracy in the country by holding “free, fair and credible” presidential elections, “with unrestricted participation and international observers and standards”, in the near future.

They also reiterated their concern at the serious humanitarian crisis affecting the Venezuelan people.