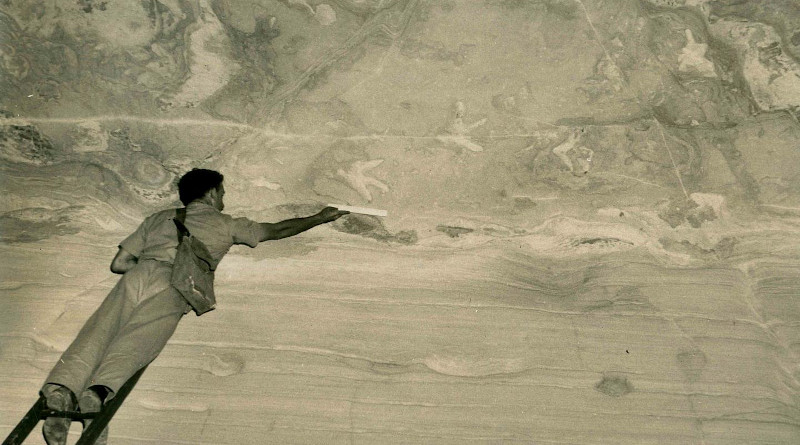 The mystery surrounding dinosaur footprints on a cave ceiling in Central Queensland has been solved, in article published in Historical Biology, after more than a half a century.

University of Queensland palaeontologist Dr Anthony Romilio discovered pieces to a decades-old puzzle in an unusual place – a cupboard under the stairs of a suburban Sydney home.

“The town of Mount Morgan near Rockhampton has hundreds of fossil footprints and has the highest dinosaur track diversity for the entire eastern half of Australia,” Dr Romilio said.

“Earlier examinations of the ceiling footprints suggested some very curious dinosaur behaviour; that a carnivorous theropod walked on all four legs.

“You don’t assume T. rex used its arms to walk, and we didn’t expect one of its earlier predatory relatives of 200 million years ago did either.”

Researchers wanted to determine if this dinosaur did move using its feet and arms, but found accessing research material was difficult.

“For a decade the Mount Morgan track site has been closed, and the published 1950s photographs don’t show all the five tracks,” Dr Romilio said.

However Dr Romilio had a chance meeting with local dentist Dr Roslyn Dick, whose father found many dinosaur fossils over the years.

“Our father was a geologist and reported on the Mount Morgan caves containing the dinosaur tracks in 1954.

“Besides his published account, he had high-resolution photographs and detailed notebooks, and my sisters and I had kept it all.

“We even have his dinosaur footprint plaster cast stored under my sister’s Harry Potter cupboard in Sydney.”

Dr Romilio said the wealth and condition of ‘dinosaur information’ archived by Ms Dick and her sisters Heather Skinner and Janice Millar was amazing.

“I’ve digitised the analogue photos and made a virtual 3D model of the dinosaur footprint, and left the material back to the family’s care,” he said.

“In combination with our current understanding of dinosaurs, it told a pretty clear-cut story.”

The team firstly concluded that all five tracks were foot impressions – that none were dinosaur handprints.

Also the splayed toes and moderately long middle digit of the footprints resembled two-legged herbivorous dinosaur tracks, differing from prints made by theropods.

“Rather than one dinosaur walking on four legs, it seems as though we got two dinosaurs for the price of one – both plant-eaters that walked bipedally along the shore of an ancient lake,” Dr Romilio said.

“The tracks lining the cave-ceiling were not made by dinosaurs hanging up-side-down, instead the dinosaurs walked on the lake sediment and these imprints were covered in sand.

“In the Mount Morgan caves, the softer lake sediment eroded away and left the harder sandstone in-fills.”