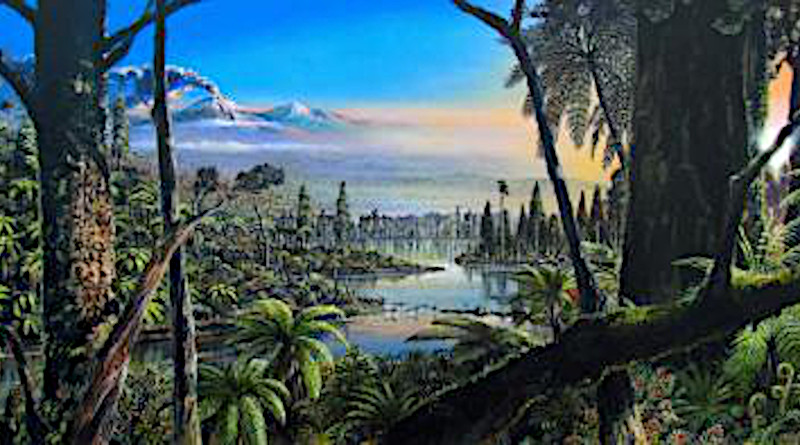 Researchers have found evidence of rainforests near the South Pole 90 million years ago, suggesting the climate was exceptionally warm at the time.

A team from the UK and Germany discovered forest soil from the Cretaceous period within 900 km of the South Pole. Their analysis of the preserved roots, pollen and spores shows that the world at that time was a lot warmer than previously thought.

The discovery and analysis were carried out by an international team of researchers led by geoscientists from the Alfred Wegener Institute Helmholtz Centre for Polar and Marine Research in Germany and including Imperial College London researchers. Their findings are published in Nature.

Co-author Professor Tina van de Flierdt, from the Department of Earth Science & Engineering at Imperial, said: “The preservation of this 90-million-year-old forest is exceptional, but even more surprising is the world it reveals. Even during months of darkness, swampy temperate rainforests were able to grow close to the South Pole, revealing an even warmer climate than we expected.”

The work also suggests that the carbon dioxide (CO2) levels in the atmosphere were higher than expected during the mid-Cretaceous period, 115-80 million years ago, challenging climate models of the period.

The mid-Cretaceous was the heyday of the dinosaurs but was also the warmest period in the past 140 million years, with temperatures in the tropics as high as 35 degrees Celsius and sea level 170 metres higher than today.

However, little was known about the environment south of the Antarctic Circle at this time. Now, researchers have discovered evidence of a temperate rainforest in the region, such as would be found in New Zealand today. This was despite a four-month polar night, meaning for a third of every year there was no life-giving sunlight at all.

The presence of the forest suggests average temperatures were around 12 degrees Celsius and that there was unlikely to be an ice cap at the South Pole at the time.

The evidence for the Antarctic forest comes from a core of sediment drilled into the seabed near the Pine Island and Thwaites glaciers in West Antarctica. One section of the core, that would have originally been deposited on land, caught the researchers’ attention with its strange colour.

The team CT-scanned the section of the core and discovered a dense network of fossil roots, which was so well preserved that they could make out individual cell structures. The sample also contained countless traces of pollen and spores from plants, including the first remnants of flowering plants ever found at these high Antarctic latitudes.

To reconstruct the environment of this preserved forest, the team assessed the climatic conditions under which the plants’ modern descendants live, as well as analysing temperature and precipitation indicators within the sample.

To get these conditions, the researchers conclude that 90 million years ago the Antarctic continent was covered with dense vegetation, there were no land-ice masses on the scale of an ice sheet in the South Pole region, and the carbon dioxide concentration in the atmosphere was far higher than previously assumed for the Cretaceous.

Lead author Dr Johann Klages, from the Alfred Wegener Institute Helmholtz Centre for Polar and Marine Research, said: “Before our study, the general assumption was that the global carbon dioxide concentration in the Cretaceous was roughly 1000 ppm. But in our model-based experiments, it took concentration levels of 1120 to 1680 ppm to reach the average temperatures back then in the Antarctic.”