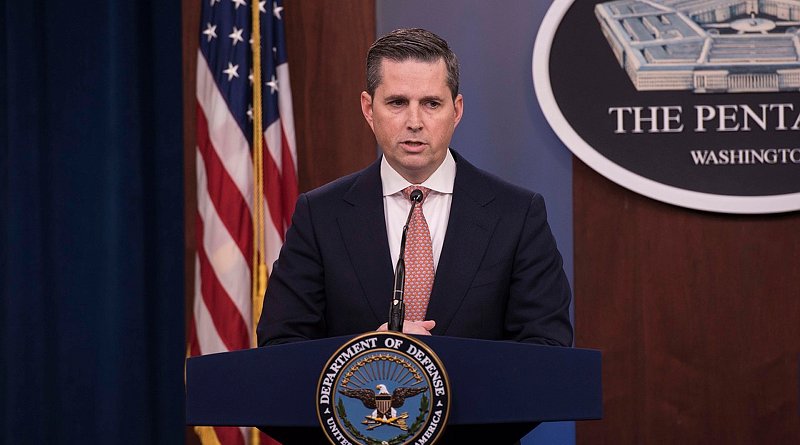 Two Navy hospital ships deployed to New York and Los Angeles to aid in fighting the pandemic are winding down operations, Jonathan Rath Hoffman, assistant to the secretary of defense for public affairs, said Friday.

“These are both welcome signs that the American public is following CDC guidelines and the number of COVID-19 cases are decreasing,” Hoffman said. “Local hospital capacity in these two areas have been sufficient to meet the demand.”

This does not mean that DOD personnel are out of the fight against coronavirus, though. In New York — the hardest hit area in the country — there are almost 700 uniformed doctors and nurses deployed in hospitals in the city and surrounding areas, Hoffman said.

But the DOD has worldwide missions, responsibilities and interests, and the Pentagon spokesman highlighted some of them.

He announced that British Royal Navy Commodore James Parkin turned over command of the International Maritime Security Construct in Manama, Bahrain to British  Royal Navy Commodore Rob Bellfield in a virtual ceremony. The construct is meant to secure the vitally important Arabian Gulf region from malign actions. A total of eight nations participate in the construct and Parkin said he expects more to join.

He also noted that yesterday the U.S. Transportation Command awarded a $7.2 billion global household goods contract to the American Roll-on, Roll-off Carrier Group of New Jersey. The contract is for relocating service members and their families.

Hoffman also announced that two Navy ships — the USS Barry and USS Bunker Hill — conducted freedom of navigation operations this week in the South China Sea. The ships “started and ended a full transit at a time and place of our choosing, as we always do,” he said. “The United States will continue to fly, sail and operate to challenge excessive maritime claims in order to preserve the rights, freedoms and uses of the sea and airspace guaranteed to all nations under international law.”

Finally, he announced that DOD representatives will testify before the Senate Armed Services Committee next week on the Federal Communications Commission decision to award Ligado Networks to deploy a 5G system that could disrupt the Global Positioning System. Dana Deasy, DOD’s chief information officer; Michael Griffin, undersecretary of defense for research and engineering; and Space Force Gen. John Raymond, the chief of space operations and commander of U.S. Space Command, will testify before the panel.