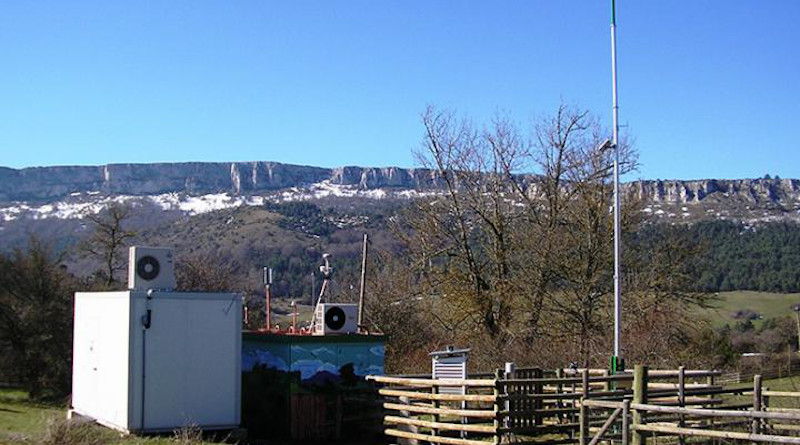 Atmospheric contamination is one of society’s main concerns, with nitrogen dioxide (NO2) and tropospheric ozone (O3) being among the contaminants that are giving rise to the most concern.

In principle, the measures to reduce NO2 contamination effectively are fairly easy to identify; however, reducing O3 contamination is much more complex because it is a secondary contaminant that is not emitted directly but is generated on the basis of chemical reactions in the atmosphere.

So a number of contaminants, such as nitrogen oxides (NOx) and a large number of volatile organic compounds (VOC), undergo various chemical reactions and physical transformations brought about by the action of solar radiation and which lead to the formation of ozone.

“Ozone is formed in the atmosphere mainly as a result of the reaction of NOx and VOCs in the presence of high solar radiation,” said María Carmen Gómez, researcher in the UPV/EHU’s Atmospheric Research Group (GIA). So “the way to control the ozone involves controlling these contaminants, their precursors and getting to know their formation mechanisms better”, she added.

The Valderejo Nature Reserve is one of the stations in the Basque Country where over the last few years the legal limits stipulated for ozone have been intermittently exceeded. Against this background and for the purpose of studying the ozone dynamics in this area, the UPV/EHU’s Atmospheric Research Group has developed a database of more than 60 volatile organic compounds measured continuously over the last ten years in the Valderejo Nature Reserve.

VOCs originate both naturally (biogenic VOCs, BVOCs) and anthropogenically (due to the evaporation of organic solvents, the burning of fuels, transport, etc.). So “we characterised the precursors in ozone formation and calculated the formation potential of each compound individually”, explained María Carmen Gómez.

“The main results of this study centre on the episodes in which the target and/or information threshold values stipulated by legislation for ozone were exceeded, which tends to occur in the Valderejo Nature Reserve between June and September. The contribution of biogenic volatile organic compounds (BVOCs) towards the ozone forming potential over the summer months is reckoned to account for up to 68% of the total VOCs measured,” said the UPV/EHU researcher.

“BVOCs include isoprene and monoterpines emitted by vegetation. Isoprene is highly volatile and its emission increases with the rise in temperature and radiation. Monoterpines, emitted mostly by conifers, are stored by part of the vegetation; radiation has little effect on their emission, while temperature has a major effect,” explained Gomez.

What is more, “we saw that between 13% and 51% of the ozone recorded in the reserve is due to local VOCs; the rest are transported to the measuring station, in particular when contaminated air masses arrive”, said the researcher of the group.

María Carmen Gómez stresses the need for the study to be pursued further. “It is a way of expanding knowledge about ozone transportation and formation processes in the Basque Autonomous Community (region). As they are complex processes, the more information we have, the greater the possibilities will be of interpreting them properly so that they can be used to manage air quality and inform control strategies”.