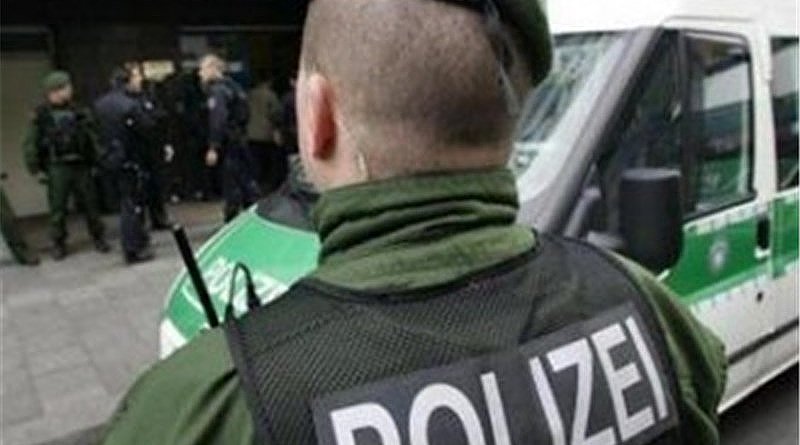 In the early hours of  April 15, around 350 German law enforcement officials arrested four Tajik asylum seekers in the German state of North Rhine-Westphalia. According to the state prosecutor, the men, all between 24 and 32 years old and Tajik nationals, had formed a terrorist cell that identified itself, and was in contact, with Islamic State (IS). The cell members have been named by their first name and the first letter of their surname as Azizjon B., Muhammadali G., Farhodshoh K., and Sunatullokh K. [1] A fifth suspect, already in custody, was named as the 30-year-old Ravsan B. (Generalbundesanwaltschaft April 15).

According to the state prosecutor, all five men joined IS in January 2019. The five initially planned to travel to Tajikistan to conduct “armed jihad” in their home country. The cell was in contact and received guidance from two high-ranking IS members in Syria and Afghanistan. The plan to travel to Tajikistan changed into plotting attacks against targets in Germany. The cell started to plan attacks against two U.S. military facilities in Germany. The cell also planned to assassinate an individual it accused of having publicly criticized Islam. One of the cell members, Sunatullokh K., had already conducted surveillance on their potential victim (Generalbundesanwaltschaft, April 15).

The details of the attack plot are still somewhat murky. It reportedly might have included the use of parachutes as the wife of one of the terrorist suspects had inquired about paragliding courses (Spiegel, April 17).

While the cell never took up a course on paragliding, its members had already acquired weapons and ammunition. Additionally, Ravsan B. had also brought components for the construction of an improvised explosive device (IED). To finance their attack plan and IS in Syria, the cell collected money in Germany and transferred it via Turkey to IS. To generate more income, Ravsan B. had accepted a $40,000 contract killing in Albania. To fulfill the deal, Ravsan B. and Farhodshoh K. had indeed traveled to Albania, but the plan was canceled for unknown reasons and the pair returned to Germany (Generalbundesanwaltschaft, April 15 ).

How or when German security authorities became aware of the cell remains unkown. According to the Interior Minister of the State of North Rhine-Westphalia Herbert Reul, the “accused had been under our surveillance for some time now” (Welt, April 15).

The German authorities had indeed seemingly been looking at potential terrorists from Tajikistan for some time. In March 2019, a 19-year-old Tajik national drove his car at excessive speed through a pedestrian zone in the city center of Essen. The man was stopped and arrested. The security authorities worried it could be the opening for a string of attacks and preemptively arrested 11 individuals—the majority being Tajik nationals—in a counter-terrorism operation across the states of North Rhine-Westphalia and Baden-Württemberg. The men were suspected of being affiliated with IS, but were quickly released and not charged (Süddeutsche Zeitung, March 30, 2019).

Possibly in connection to the counter-terrorism operation, Ravsan B.—who appears to have been the leader of the cell—was arrested and jailed in March 2019 after police found a handgun in his possession. His arrest seemed to severely disrupt the cell and possibly prompted the investigation leading to the dismantling of the entire group a year later (Frankfurter Allgemeine Zeitung, April 15).

The now foiled plot shows that the threat from IS remains significant—the group was still able to inspire, connect with, and direct aspiring members into planning attacks in the West, well after the peak of the group’s strength.

The composition of the cell, consisting of Tajik nationals, is interesting as it is the second significant attack plot against U.S. military facilities in Germany with connections to Central Asia. In 2007 a trio, known as the “Sauerland cell,” plotted to attack the U.S. Ramstein Air Base in Rheinland-Pfalz. All three had received terrorist training in the border region between Afghanistan and Pakistan and were closely linked to the Islamic Jihad Union (IJU), a splinter group of the Islamic Movement of Uzbekistan (IMU). Close U.S. and German intelligence and security cooperation resulted in the timely prevention of the plot. [2]

From a broader historical perspective, attacks against U.S. military facilities and service members represent a continuum in Germany’s history of terrorism. During the last five decades, U.S. military bases and service members in Germany have been repeatedly targeted by terrorists from a wide variety of terrorist groups, both domestic and foreign, reflecting in a local context the wider trends of international terrorism. In the Cold War context, the U.S. military presence in West Germany was targeted by the far-left terrorist group “Red Army Fraction” (RAF) on multiple occasions.

As RAF ceased to target the U.S. military presence, Libya saw an opportunity to strike at the U.S. on West German soil. On April 5, 1986, the discotheque La Belle in West Berlin was bombed. Three people were killed and 229 injured. The venue was commonly frequented by U.S. soldiers and two of the dead and 79 of the injured were Americans. The bombing had been planned by the Libyan Intelligence Service. After Telex messages from Tripoli to its embassy in East Berlin were intercepted offering congratulations for a “job well done,” President Reagan ordered retaliatory airstrikes against Libya.

The end of the Cold War did bring a pause to attacks against the U.S. military in the united Germany. The rise of jihadist terrorism, however, has again brought unwanted attention to U.S. forces in the country. The only successful attack by jihadist terrorists against the U.S. military in Germany occurred on March 2, 2011, when a 21-year-old refugee from Kosovo, Arid Uka, shot and killed two U.S. service members and wounded another two at the Frankfurt Airport. [4] Although there has not been another successful attack against the United States in Germany, the Tajik plot highlights the fact that jihadist terrorists continue to see U.S. military installations in Germany as attractive targets. More broadly, the disrupted plot is a serious reminder of Islamic State’s continuing ability to attract supporters and direct these against the West.

Source: This article was published by The Jamestown Foundation in its Terrorism Monitor Volume: 18 Issue: 9