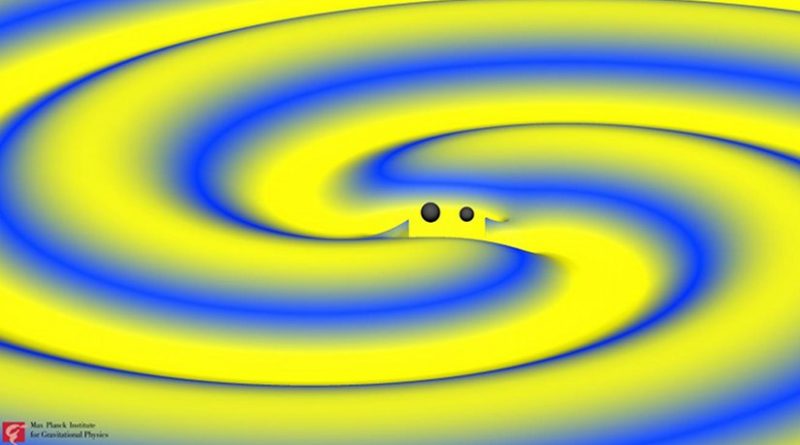 This image shows a numerical simulation of a binary black hole merger with masses and spins consistent with the third and most recent LIGO observation, named GW170104. The strength of the gravitational wave is indicated by elevation as well as color, with blue indicating weak fields and yellow indicating strong fields. The sizes of the black holes are doubled to improve visibility. Image Credit: Numerical-relativistic Simulation: S. Ossokine, A. Buonanno (Max Planck Institute for Gravitational Physics) and the Simulating eXtreme Spacetime project Scientific Visualization: T. Dietrich (Max Planck Institute for Gravitational Physics), R. Haas (NCSA)

On January 4, 2017, at 11:11:58 CET, scientists observed gravitational waves–ripples in the fabric of spacetime–for the third time.

The twin Laser Interferometer Gravitational-Wave Observatory (LIGO) detectors–located in Livingston, Louisiana, and Hanford, Washington–detected the gravitational wave event, named GW170104. The LIGO Scientific Collaboration (LSC) and the Virgo Collaboration published a report describing the discovery and its implications on June 1, 2017 in the journal Physical Review Letters.

Gravitational waves carry information about their origins and about the nature of gravity that cannot otherwise be obtained. Physicists on the LIGO and Virgo teams concluded that, as with LIGO’s first two historic detections, the final moments of a black hole merger produced the gravitational waves that LIGO observed on January 4, 2017.

“The observation and interpretation of yet another LIGO signal, GW170104, confirms the success of our theoretical program to model binary black holes,” said Alessandra Buonanno, a UMD College Park Professor of Physics and LSC principal investigator who also has an appointment as Director at the Max Planck Institute for Gravitational Physics in Potsdam, Germany. Buonanno has led the effort to develop highly accurate models of gravitational waves that black holes would generate in the final process of orbiting and colliding with each other.

“For the third LIGO signal we could gather some evidence that at least one black hole might be rotating in a direction misaligned with the overall orbital motion–a spin configuration favored by some astrophysical formation scenarios of binary black holes” Buonanno added, noting that her team made substantial improvements to their methodology throughout 2016, in between LIGO’s observing runs.

The newly detected merger occurred approximately 3 billion years ago, making it more than twice as old (and more than twice as distant) as the first two events, which occurred 1.3 and 1.4 billion years ago, respectively. Based on the arrival time of the signals–the Hanford detector measured the waves 3 milliseconds before the Livingston detector–researchers can roughly determine the position of the source in the sky.

“The latest detection adds to the diversity of black hole merger events we’ve been able to observe directly,” said Peter Shawhan, an associate professor of physics at UMD and an LSC principal investigator who serves as Data Analysis Committee Chair for the LSC. “We’re conducting a census of black holes in binary systems in our universe and we expect to discover other types of signals too. Besides just counting them, we can learn from their properties how they were born and how they evolved.”

The researchers also looked for an effect called dispersion, which is known to occur when light waves in a physical medium such as glass travel at different speeds depending on their wavelength. This is how a prism creates a rainbow, for example. Einstein’s general theory of relativity forbids dispersion from happening in gravitational waves as they propagate from their source to Earth. LIGO did not find evidence for this effect in GW170104.

“Even for this new event, which is about two times farther away than our first two detections, we could not find any evidence that gravitational waves disperse as they travel in the fabric of space-time,” Buonanno said.

“Einstein still seems to have been right about the true nature of gravity,” Shawhan added.

The new detection occurred during LIGO’s second observing run, which began November 30, 2016, and will continue through August 2017. The LIGO-Virgo team is continuing to search the latest LIGO data for signs of space-time ripples from the far reaches of the cosmos. They are also working on substantial technical upgrades for LIGO’s third run, scheduled to begin in late 2018, with help from the nearly completed Virgo detector in Italy collecting data simultaneously.