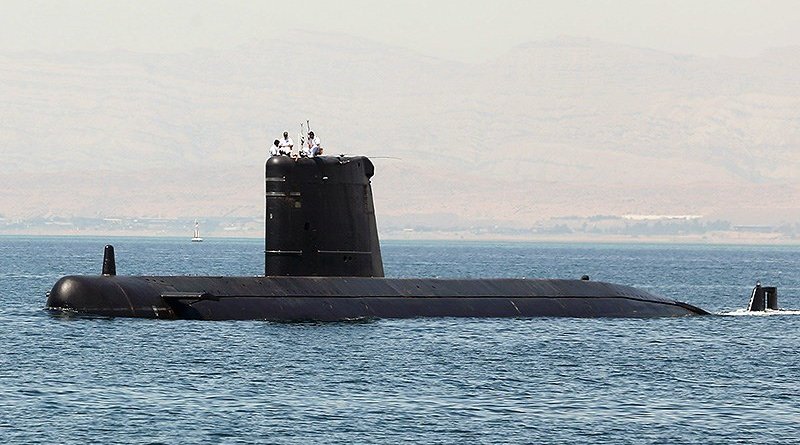 A submarine is a very powerful platform, because of its stealth features and ability to operate covertly. It plays vital role in naval warfare and as a strategic weapon carrier. It can operate under water for a considerable duration, hence cannot be easily detected; therefore it has become an essential constituent of modern navies.

Submarines (subs) are of four types, which differ mainly because of their propulsion system and weapons carried on board. Diesel powered attack submarines (SSK) while on surface use diesel engines for propulsion, and while traversing under water it runs on batteries which have limited endurance. To recharge, conventional subs have to come up to periscope depth for snorkeling very often, keeping in view battery conditions. It is very vulnerable while snorkeling; chances of detection by Anti-Submarine Warfare Forces (ASW) like maritime patrol aircraft, helicopter, and surface platforms are very high. It is relevant to mention that subs have no weapons against the aircrafts.

The endurance of SSKs has been increased by installing Air Independent Propulsion (AIP) system. This allows additional submerged time and is particularly useful during evasion and transiting through areas of concentrated ASW activities. The advent of this technology has enhanced the submerged endurance but is still restricted in speed. The maximum speed is around 15 knots but it moves 3-5 knots while submerged to conserve batteries. These generate very less noise, hence difficult to detect.

Maximum operating depth is around 300 meters and tonnage 1000 to 3500. Weapons carried are anti-ship and anti-submarine torpedoes and sea mines. Also carry medium range (800Km) anti-ship and land attack cruise missiles. Next generation is nuclear propelled attack subs (SSN), nuclear powered guided missiles (SSGN) and nuclear powered ballistic missile carrying subs (SSBN). These have a nuclear power plant for propulsion with almost unlimited endurance, speed around 30 knots on surface as well as submerged, and maximum operating depth more than 500 meters. These are much heavier and noisy as compared to conventional subs. The displacement is from 4000 to 18000 tones. These are designed to remain deployed for much longer duration; only human fatigue is the restrictions. The main role of SSNs and SSGNs is to operate as ASW platforms for a carrier task force and convoy support operations.

SSBNs carry ballistic missiles and are considered as strategic platforms. These are considered ideal platforms for second strike because of their stealth and on patrol in the anticipated areas during tension period and even peace time. However, due to miniaturization of weapons and equipment conventional subs especially with AIP system have also been designed to carry medium range land attack missiles (800Km) with nuclear warheads. Like other strategic assets these also require robust command and control system.

Submarines are considered as sea denial war machines. It is to deny the enemy ability or freedom to use a specified area of the sea for own purposes for specific time period. It may be mentioned that naval mines are also sea denial weapons.

The other important terminology used in naval warfare is Sea Control. It entails establishment of naval superiority in the area where operations are intended to be conducted. It aims to permit relative freedom of action to own forces in a specific area and for given period of time, while denying it for the opposing forces. To achieve sea control presence of naval platforms is considered essential, therefore surface ships especially air craft carriers and maritime patrol aircraft are considered ideal.

Pakistan was the first country of South Asia which acquired a conventional sub from USA in 1964. Pakistan Navy (PN) sub Ghazi, former USS Diablo a Tench class joined PN fleet in June 1964. During 1965 war (6 to 22 Sep) with India she played significant role of sea denial.

According to “Story of Pakistan Navy 1947-1972” p 213-226, the role assigned to PN included seaward defence of ports of Pakistan, keeping sea lines of communication open, escorting merchant ships, protection of coast against amphibious assault, interdiction of shipping and assisting Army in the riverine operations in former East Pakistan. PN Sub Ghazi was deployed off Bombay area to sink heavy units of Indian Navy (IN) that is Aircraft Carrier Vikrant and two heavy cruisers, Delhi and Mysore. She was in position in the morning of 5 Sep. Vikrant and Delhi were refitting in Bombay. Mysore was operational in Cochin harbor. It was assessed that Mysore will move north towards Bombay but it never left Cochin area.

In fact most of the IN units remained in harbor. One submarine had achieved sea denial of the desired area in the classic sense. It facilitated successful bombardment of Dwarka radar station on the night 7/8 Sep from a distance as close as of 6 nautical miles by PN task force comprising cruiser Babur and six destroyers and frigates. The main objective was to destroy radar station, to draw heavy IN units out of Bombay for Ghazi to attack, lower morale of Indians, and to divert Indian air effort away from northern area close to Karachi.

IN ships did not come out therefore, after Dwarka operation Ghazi was assigned patrol off the Indian Kutch coast. On 22 Sep she managed to get an IN frigate as its target. She carried out attack with four torpedoes at 7: 11 pm. The commanding officer( CO), commander( Cdr) K R Niazi ( retired as CNS) and second in command Lt Commander Ahmad Tasnim (retired as Vice Admiral and got second SJ in 1971 war) got gallantry award Sitara e Jurrat ( SJ). Pakistan Navy acquired three Daphne class submarines from France in 1969-70, PNS/M Hangor commanded by Cdr Ahmed Tasnim, was the first to be commissioned on 1 Dec 69. These three subs along with Ghazi participated in 1971 war (3 to 16 Dec) with India. Sub Ghazi commanded by Cdr Zafar Mohammad Khan left harbor on 14 Nov on the assigned mission to lay mines at the entrance of Vishakhapatnam and there after hunt for carrier Vikrant operating in Bay of Bengal.

The remaining three subs left on their mission to patrol along the western coast of India between 15 to 22 Nov at staggered dates. Ghazi during mining operation off Vishakhapatnam got sunk along with 84 crew and no survivors. The nation has not recognized the bravery, courage and sacrifices of the CO and crew by awarding gallantry award (post humus) to any officer and sailor. It may be mentioned here that battery conditions of this sub were not in good state.

The mission far away from home base, transiting along the Indian coast in hostile environments was under taken by the CO and crew beyond the call of duties. Had it been such a long and challenging operation during peace time, the sub may not have been deployed. However, PN has named one establishment and Central Mess in Islamabad on the name of CO, Cdr Zafar. The road crossing in front of naval residential complex Islamabad E 8,has taken the name as Zafar Chowk.

After declaration of hostilities in West Pakistan on 3 Dec, PN submarine Hangor carried out torpedo attack on Indian frigate Khukri on 9 Dec, 30 miles off Kathiawar coast. The frigate sank in few minutes because torpedo hit the explosive magazine. A total 18 officers and 176 sailors including CO who deliberately stayed on the sinking ship as per naval traditions lost their lives. This was first successful attack by a conventional submarine after WW-II. Indian morale had gone down and some of the operations which they had planned using their missile boats were called off. The CO of Hangor Cdr Ahmed Tasnim and 3 officers were awarded SJ and few sailors Tamgha e Jurrat (TJ). These operations amply highlight the significance of subs for a blue water navy.

Realizing the importance of submarines for naval operations and for second nuclear strike, India had embarked upon indigenous construction of conventional as well as nuclear subs as early as 1980s. Two German 209 class ( Shishumar class ) have been built in Magazon Dock Ltd Mumbai in the years 1984- 94. This Shipyard has also manufactured two Scorpion class ( Kalvari class) French patrol submarines, in the years 2010 – 2019 and third of this class is under construction.

For indigenous construction of nuclear sub Advance Technology Vessel (ATV) project was started in early 1980s. It is pertinent to mention that amongst the three elements of the triad, the sub launched ballistic missile (SLBMs) are considered the most important because the nuclear powered ballistic missile sub also known as a boomer in the colloquial language of seamen is the hardest to detect, track and destroy. INS Arihant a SSBN has already joined the Indian Navy and second of this class Aridaman is expected to be commissioned shorty. In addition one nuclear Attack submarine INS Chakra (Ex-Soviet Nerpa) is also on the inventory of IN. India had taken on lease a Charlie class nuclear sub from former Soviet Union from 1988- 91 for operations.

It is obvious that Indian navy has sufficient knowledge of construction and operation of nuclear subs. PN has two Agosta and 3 Agosta 90 B (Khalid class) subs with AIP system. Two have been built in Karachi Shipyard and Engineering Works (KSEW). These have medium range land attack cruise missiles with nuclear warhead. In addition order for 8 latest versions of Chinese conventional subs with AIP system has been placed. Four will be built in Pakistan in KSEW. However, for long range land attack missiles and sustained deployment PN needs to have at least two nuclear submarines with ballistic missiles. Keeping in view Indian second strike capability, our government needs to start the project at the earliest. In the meantime PN may actively consider sending their officers and sailors to China or Russia for training on their nuclear submarines.

*Anjum Sarfraz is a Commodore ( Retd) from Pakistan Navy who has done Phd from Karachi University and working as a Senior Research Fellow in Strategic Vision, Institute, Islamabad.

2 thoughts on “Importance Of Nuclear Submarines For Pakistan – OpEd”