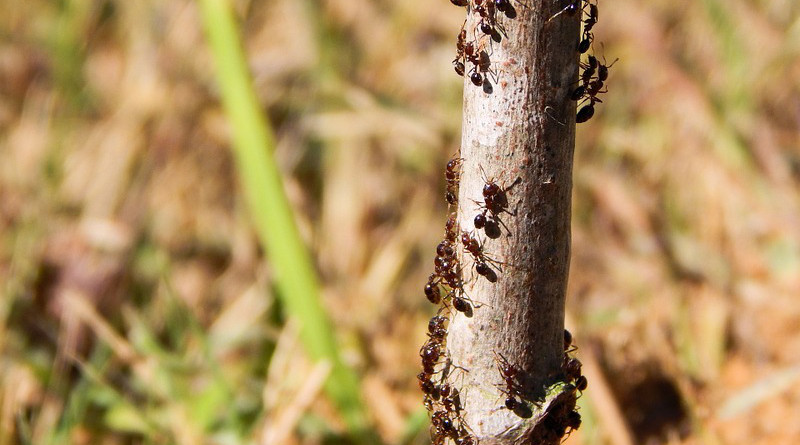 This week, scientists of the Institute of Bee Health of the University of Bern have published an article in the peer-reviewed journal Communications Biology, which shows how even low doses of neonicotinoid insecticides, as they may realistically occur in contaminated soils, adversely affect the development of black garden ants (Lasius niger). This study highlights the need to overthink current deployment and management of chemical pest control for more sustainable agriculture.

“Ants are one of the most important animal groups on our planet. However, they are also affected by the recently observed global declines in abundance and diversity of insects”, says Daniel Schläppi of the Institute of Bee Health of the University of Bern, main author of the study. Evidence suggests that pesticides are among the factors responsible for the observed declines. “One problem of these substances is their persistence and the potential to contaminate soils and water, even in areas in which they are not applied”,says co-author Gaétan Glauser from the University of Neuchâtel.

But so far, no data existed to show how exposure to low concentrations, which do not induce direct mortality, affect ants in the long run. The data, collected at the University of Bern in cooperation with Agroscope and the University of Neuchâtel, clearly demonstrate previously overlooked long-term effects, which are not detectable during the first year of colony development. The results are published in “Communications Biology”, an Open-Access Journal of Nature. According to the authors, this study highlights the importance to develop sustainable agricultural practices that incorporate reduced use of agro-chemicals to prevent irreparable damages to natural ecosystems.

Thiamethoxam has a clear negative impact on the health of ants. Thiamethoxam is a neonicotinoid insecticide used to combat pest insects that threaten our harvest. Unfortunately, there is more and more evidence showing that thiamethoxam and similar agro-chemicals have negative consequences for other beneficial insects, including ants and honey bees.

“With our study we show that ants, which play a very important roles in our ecosystems and provide valuable ecosystem services such as natural pest control, are negatively affected by neonicotinoids too”, says Schläppi.

In the present work, colonies of black garden ants were chronically exposed to field realistic concentrations of thiamethoxam over 64 weeks. Colonies were raised in the laboratory from queens that were captured in the field. Before the first overwintering of the colonies no effect of neonicotinoid exposure on colony strength was visible. However, until the second overwintering it became apparent that colonies exposed to thiamethoxam were significantly smaller than control colonies. Because the number of workers is a very important factor for the success of an ant colony, the observed effects are most likely to compromise colony survivorship. Considering the important role of ants in natural ecosystems, our results indicate that neonicotinoids impose a threat to ecosystem functioning.

The call for sustainable solutions

“Accumulating long-term impact of neonicotinoids on ants is alarming”, says Prof. Peter Neumann of the Institute of Bee Health at the University of Bern. “This is an exemplary study showing how negative effects of an environmental contaminant only become visible after long monitoring, but with potentially far reaching consequences”. Therefore, the authors stress the importance to include ants as model organisms and to fully incorporate long-term effects in future risk assessment schemes for more sustainable agriculture.

This study was financially supported by the Béatrice Ederer-Weber Foundation, the Vinetum Foundation and the Swiss Federal Office for the Environment (FOEN). The research was conducted by scientist working at the University of Bern (Institute of Bee Health, Vetsuisse Faculty), Agroscope (Swiss Bee Research Centre) as well as University of Neuchâtel (Neuchâtel Platform of Analytical Chemistry).