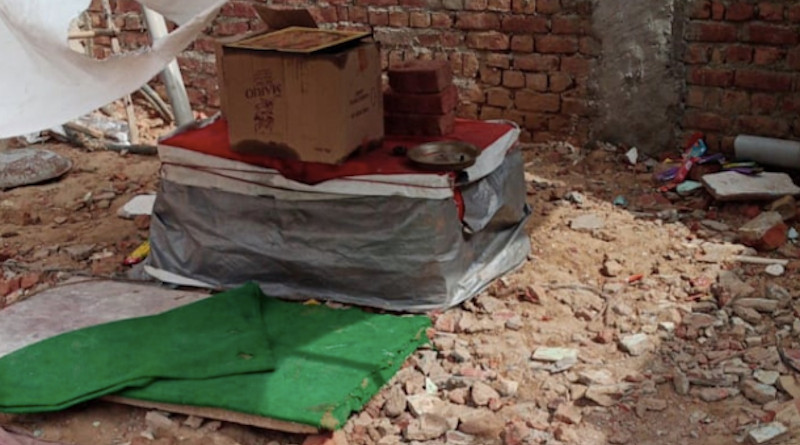 An empty makeshift platform on June 28 after police removed an idol of a Hindu deity that Hindu fanatics forcefully installed inside a Protestant church in India's Haryana state. (Photo supplied)

Police have removed the idol of a Hindu deity that a group of Hindus forcefully installed inside a Protestant church in India’s Haryana state.

Some 100 state police personnel in two buses arrived at the Assembly of God Church in Faridabad town and removed the idol on June 27, a week after its installation. No one opposed the police move, said Pastor Uday Pillai, associate pastor of the church.

“We are relieved and happy that police have cleared the encroachments from our church and returned it to us,” Pastor Pillai told UCA News on June 29.

The police came with a Hindu priest who offered prayers at the site before removing the idol. The police took away the idol of a Hindu monkey-headed god.”Now, our site is free and we will continue our work,” the pastor said.

He said the church had been under the custody of some Hindu fanatics since June 21 when they installed the idol and conducted daily prayers to it.

The Hindu activists claimed a temple existed at the site of the church and they were reclaiming the site. They projected it as a pious religious duty but produced no documents to support their claims.

The Protestant church has been functioning there for 15 years. Christians purchased the land from a local person who occupied it for 47 years.

Minakshi Singh, general secretary of Unity in Christ, a forum of Protestant churches, told UCA News on June 28 that they have “been praying and also approaching the authorities for restoring justice to us.”

“Hours after complaining to the top police official, police reached the spot and cleared the encroachment,” Singh said.”It was really a miracle. In most such cases, the fanatics never move out and often they get the tacit support of the police and administration,” she said.

Haryana is ruled by the pro-Hindu Bharatiya Janata Party (BJP), which is accused of supporting the ideology of turning India into a Hindu-only nation.

Pastor Pillai said Christian groups need to be more conscious as fanatics will continue to create trouble for Christians as the state government plans to enact a law to check religious conversion.

Chief Minister Manohar Lal Khattar recently said cases of forced conversions have been increasing in Haryana, and the law against conversion has to be passed “so that strict action could be initiated against the accused.

“Seven Indian states have such laws aimed at checking Christian missionary activities. Hindu groups claim Christian services such as education and health are a facade to attract the poor and convert them to Christianity.

Hindus form 87 percent of 26 million people in the state, with Christians forming a minuscule 52,000 or just 0.2 percent of the population.