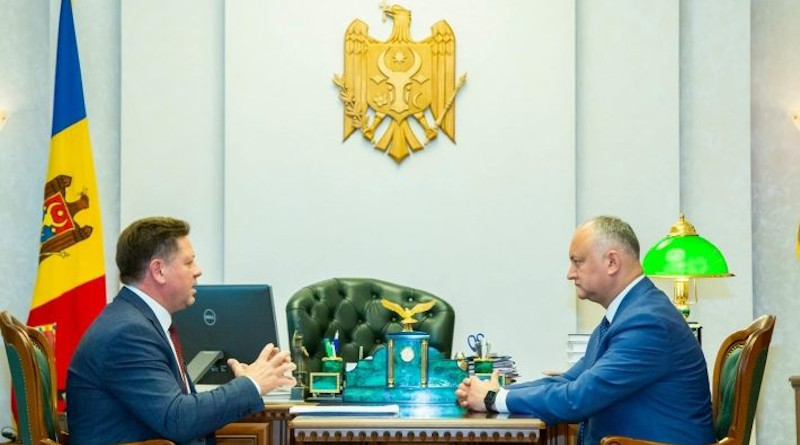 Former deputy Stefan Gatcan was summoned for a talk on COVID-19 pandemic by President Igor Dodon on June 5. Photo: president.md

Facing a growing danger of losing their parliamentary majority, the ruling Socialists have forced a deputy who tried to switch party to resign his mandate.

A former Socialist deputy resigned on Wednesday from the Moldovan parliament after being openly warned that he faced bribery allegations at the hands of the General Prosecutor’s Office after he switched party.

Stefan Gatcan had filed a petition announcing that he was leaving the Moldovan Socialist Party, PSRM, for the opposition Pro Moldova Party, led by Andrian Candu, the former speaker of parliament and the godson of the fugitive tycoon Vladimir Plahotniuc.

His defection put the Socialist government at risk of a no-confidence motion – which explained Socialist fury at his announcement.

Former Socialist Party colleagues more or less ordered Gatcan to resign from his parliamentary mandate after joining Pro Moldova. “You have no justification [to remain]. Parliament does not need another political prostitute,” Socialist deputy Vlad Batrincea said.

Gatcan’s resignation was published on Wednesday on Facebook by Corneliu Furculita, the chief of the Socialist group in parliament, and an friend of President Igor Dodon.

Furculita wrote that Gatcan was quitting politics to dedicate himself more to the medical sector, as he is a gynecologist, and to help the PSRM with its health policies.

“Stefan Gatcan has announced this decision to give up the mandate of deputy and dedicate himself fully to medicine … the PSRM faction took note of this decision and encourages Gatcan to participate as actively as possible in the life of the Socialist Party,” Furculita wrote on his social media page.

But a day earlier, on Tuesday, Furculita said he had filed criminal charges against Gatcan to the General Prosecutors Office.

“I have filed a complaint with the prosecutor’s office in which I informed it about the corruption of deputy Stefan Gatcan. In the complaint, I also signaled other cases of attempted corruption of some deputies from the PSRM faction,” Furculita said.

Socialist Party supporters and some deputies on Tuesday visited the maternity hospital founded by Gatcan, and shouted “Traitor, traitor!” and laid a funeral wreath. Later, the group assembled in front of Gatcan’s home and chanted: “We want a resignation”, “Traitor!”, “Shame” and other slogans.

A delegation of the Pro Moldova party which was heading to Hincesti, Gatcan’s constituency and place of residence, said it was stopped in the outskirts of Chisinau and threatened with psychical violence, according to the Pro Moldova deputy and former Justice minister, Vladimir Cebotari.